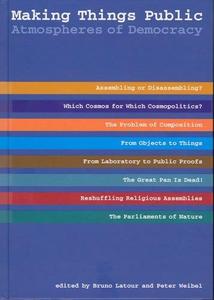 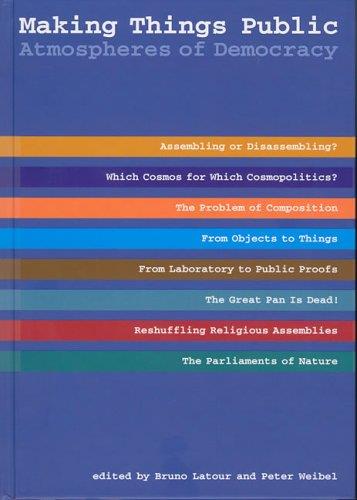 In this groundbreaking editorial and curatorial project, more than 100 writers, artists, and philosophers rethink what politics is about. In a time of political turmoil and anticlimax, this book redefines politics as operating in the realm of things. Politics is not just an arena, a profession, or a system, but a concern for things brought to the attention of the fluid and expansive constituency of the public. But how are things made public? What, we might ask, is a republic, a res publica, a public thing, if we do not know how to make things public? There are many other kinds of assemblies, which are not political in the usual sense, that gather a public around things—scientific laboratories, supermarkets, churches, and disputes involving natural resources like rivers, landscapes, and air. The authors of Making Things Public—and the ZKM show that the book accompanies—ask what would happen if politics revolved around disputed things. Instead of looking for democracy only in the official sphere of professional politics, they examine the new atmospheric conditions—technologies, interfaces, platforms, networks, and mediations that allow things to be made public. They show us that the old definition of politics is too narrow; there are many techniques of representation—in politics, science, and art—of which Parliaments and Congresses are only a part. The authors include such prominent thinkers as Richard Rorty, Simon Schaffer, Peter Galison, Richard Powers, Lorraine Daston, Richard Aczel, and Donna Haraway; their writings are accompanied by excerpts from John Dewey, Shakespeare, Swift, La Fontaine, and Melville. More than 500 color images document the new idea of what Bruno Latour and Peter Weibel call an "object-oriented democracy."