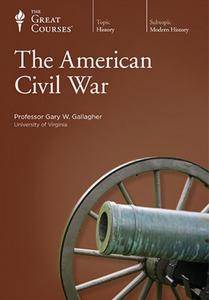 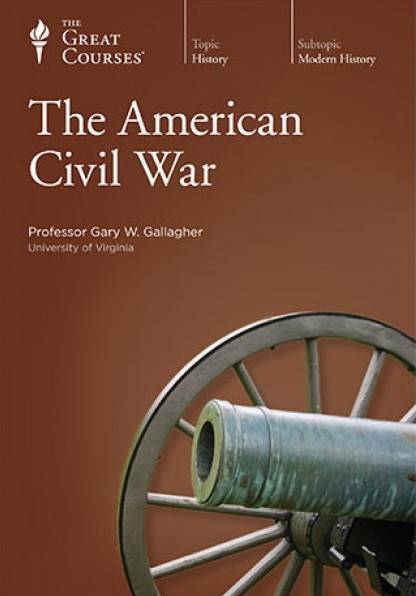 Between 1861 and 1865, the clash of the greatest armies the Western hemisphere had ever seen turned small towns, little-known streams, and obscure meadows in the American countryside into names we will always remember. In those great battles streams ran red with blood, and the United States was truly born.


Show Full Description
Leading Civil War historian Professor Gary W. Gallagher richly details the effects of the Civil War on all Americans. You'll learn how armies were recruited, equipped, and trained. You'll learn about the hard lot of prisoners. You'll hear how soldiers on both sides dealt with the rigors of camp life, campaigns, and the terror of combat. You'll understand how slaves and their falling masters responded to the advancing war. And you will see the desperate price paid by the families so many left behind.

Blue and Gray, Soaked in Red

Gettysburg. Antietam. Bull Run. Shiloh. After you absorb these lectures, the hallowed names of Civil War battles will be more than merely evocative. You will have a solid understanding of what happened and why.

Although this is not simply a course on Civil War battles and generals, about half of the lectures are devoted to the strategic and tactical dimensions of military campaigns. We must never forget: The number of dead exceeded the combined total for American wars from the 17th century through the midpoint of the Vietnam War.

Professor Gallagher's recounting of the great battles and campaigns is compelling. From Fort Sumter and First Manassas to Sherman's March and Appomattox, Dr. Gallagher brings complex patterns of events into clear focus, identifies opportunities lost or seized, and quotes memorably from firsthand accounts to give you a clear idea what it was like to be "at the sharp end" of the war's battlefields.

Extraordinary leaders and incompetent tyrants served on both sides. Their power to fascinate, to inspire, or to exasperate remains undimmed. With powerful and telling portraits, Professor Gallagher brings to life the character of Abraham Lincoln, Jefferson Davis, Ulysses S. Grant, Robert E. Lee, William Tecumseh Sherman, Stonewall Jackson, and others. Consider this example from Lecture 12:

"Stonewall Jackson is one of the great bizarre characters from the Civil War and is just a bundle of oddities and eccentricities as a person.

"He was a hypochondriac. He had all kinds of worries about his body. He would often hold his right hand up in the air because he thought he didn't have an equilibrium of blood in his body, and if he held his right hand up, then the blood would flow down and re-establish equilibrium, as he put it. An interesting notion.

"He would not eat pepper because he thought it weakened his left leg—not his right leg, just his left leg. He wouldn't let his back touch the back of a chair because he said it jumbled his organs, and it was important to sit upright so the organs were naturally atop of one another.

"He's a very odd fellow. He's in his late 30s early in the war and about to embark on a campaign that will make him the most famous Confederate military leader."
At Work in History's Great Forces

These men—some heroes, some fools—toiled in a typhoon of broader forces. Grasping this dynamic relationship among the battlefield, the home front, and the diplomatic front is absolutely essential if you hope to understand the Civil War.

You also find revealing explanations of how military events affected crucial political factors, including the morale of the Northern and Confederate peoples, the policies of their governments, and the attitudes of key European powers such as Britain and France.

The Millions Who Paid Dearly

The course vividly recounts the sacrifices made by all Americans in this struggle.

Half of all men of military age in the North mustered as soldiers in the Civil War.
It appears that roughly 80 percent of all military age men in the South served. (The South was able to spare a greater percentage of men partly because there were slaves left behind who did the daily work.)
The battles soldiers fought were savage, presaging the slaughter of World War I, where similar military tactics were used.

Off the battlefield, life was not much better.

Professor Gallagher recounts: "A ration in Lee's army in the winter of 1863–64 consisted of a quarter of a pound of meat a day and a pint of cornmeal. Two-thirds of all the men who died during the war, on both sides, died of disease, and some of the greatest killers were what we would now call childhood diseases: mumps and measles. One-third died from battlefield wounds or were killed outright on the battlefield."

On the home front, circumstances were often nearly as desperate. "In May 1864, a pair of pants cost $100 in Richmond," Professor Gallagher explains. "Bacon was $9 a pound, beans were $4 a quart, chickens were $15 each. A Confederate soldier earned $11 a month for much of the war. Congress very reluctantly increased that in June 1864 to $18 a month. One chicken would eat up more than a soldier's monthly pay, as you get toward the middle of the war."

Among the many questions you'll explore in this course have to do with the history of the war and the American Republic.

What were the war aims of the Union and the Confederacy?
Why did each side choose the strategy it did, and how well did each mobilize its resources behind that approach?
How close did the South come to winning?
By what threads did Lincoln's presidency hang in 1864?
How did each side view the war? In the first heady days after Fort Sumter fell, Northerners predicted that talk of secession would dissipate, and Southerners boasted that any one of them could "whip 10 Yankees."
How did those views change as the carnage reached a barely imaginable scale?

Professor Gallagher is aleading authority on the Civil War. He is the author of several books and dozens of scholarly articles, most recently, The Confederate War. He is a founder and was first president of the Association for the Preservation of Civil War Sites.

AudioFile magazine praises Dr. Gallagher for "well-organized, spontaneous, and entertaining lectures aimed at introductory-level students but no insult to experts." 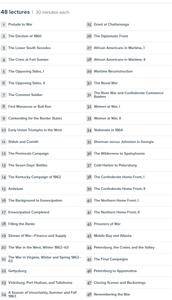 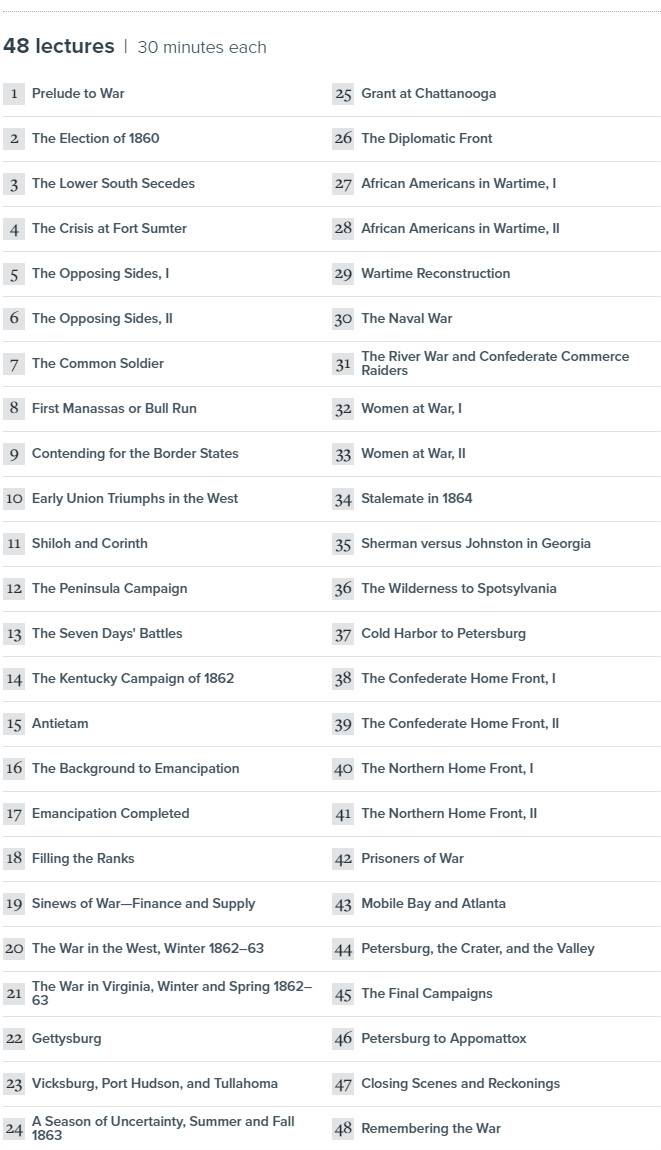 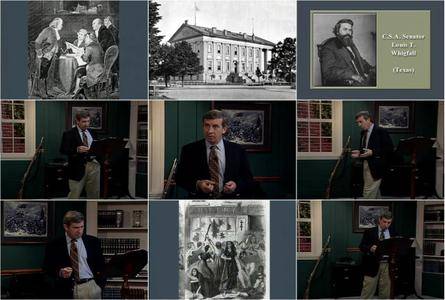 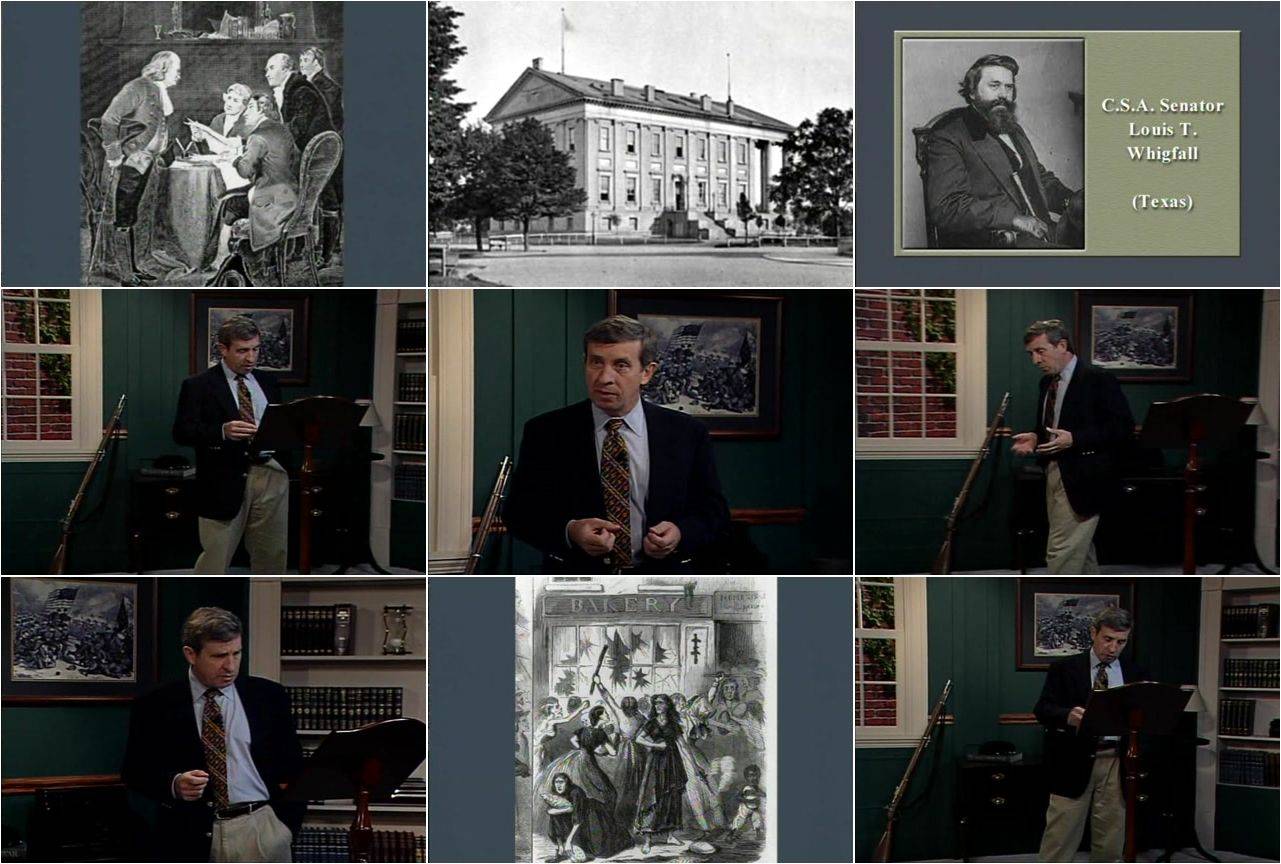