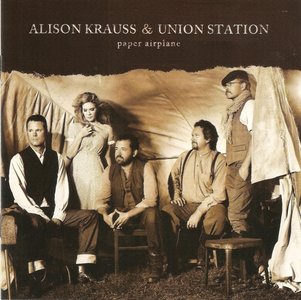 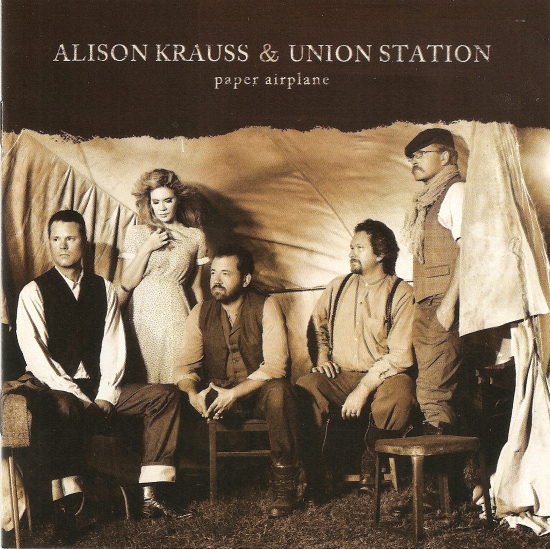 A truly breathtaking collection of 11 exquisite songs, "Paper Airplane" is Alison Krauss’ 14th album and the band’s follow-up to 2004's triple Grammy winning Lonely Runs Both Ways. It is Krauss’ first release since her 2007 internationally acclaimed, multi-platinum collaboration with Robert Plant, "Raising Sand", which won six Grammys including “Record Of The Year” and “Album Of The Year”.

Anyone who's paid attention to Alison Krauss' musical career, with and without Union Station, had to wonder what would happen after the unprecedented success of 2007's Raising Sand, her collaboration with Robert Plant. For her, the next logical move was to reunite with US, who had been dormant since 2004's Lonely Runs Both Ways and whose members all had busy solo careers. Given the long layoff, Paper Airplane was produced by US and engineered and mixed by Mike Shipley. According to Krauss, it was harder to complete than any previous album.Thankfully, it doesn't sound like it. It is a melancholy record, its songs largely revolve around themes of trial and perseverance. The title track that opens the record is a lilting country ballad written by Robert Lee Castleman and informed by Krauss' own recent life experiences. Her vocal is wrenching; it's utterly vulnerable in expressing love's loss, yet it's steely in its resolve, recognizing an eventual emergence. Peter Rowan's minor-key bluegrass stomper "Dust Bowl Children" features Dan Tyminski's trademark vocal. It's angry, bewildered, and determined. The interplay between Ron Block's banjo, Barry Bales' driving bassline, and Jerry Douglas' dobro is earthy, lean, and mean. Brother Viktor Krauss and Angel Snow contributed "Lie Awake," a spooky, broken love song full of swooping dobro and Krauss' forlorn fiddle. Only US could empathically back her searching, desperate vocal. Paper Airplane is sequenced beautifully. The reading of Richard Thompson's "Dimming of the Day" is the hinge piece on the record (and rivals the title track for the best thing here). This is Krauss' finest vocal performance this time out; although it doesn't rival Linda Thompson's original, it doesn't need to: it's devastating in expressing raw need, loss, and emptiness from a protagonist in the middle of a time of trial. Sidney Cox's "Bonita and Bill Butler" is a banjo-driven seafaring tragedy sung exquisitely by Tyminski before Paper Airplane closes with a stellar cover of Jackson Browne's "My Opening Farewell," which brings the album full circle, leaving the listener to meditate upon life's many episodes. Krauss' version wrings more sheer acceptance from the lyrics than Browne's own does. Paper Airplane is very polished – pristine, even – but there isn't an extra thing on it. It feels organic and authentic, allowing plenty of room for the emotional power in these songs to come forth. Union Station proves once more that it is a contemporary bluegrass outfit that makes no concession to contemporary country music.