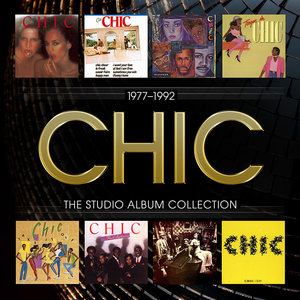 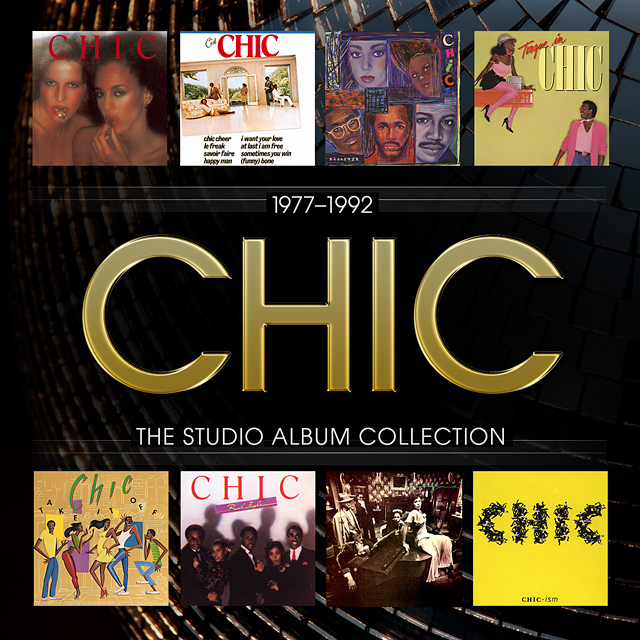 There can be little argument that Chic was disco's greatest band; and, working in a heavily producer-dominated field, they were most definitely a band. By the time Chic appeared in the late '70s, disco was already slipping into the excess that eventually caused its downfall. Chic bucked the trend by stripping disco's sound down to its basic elements; their funky, stylish grooves had an organic sense of interplay that was missing from many of their overproduced competitors. Chic's sound was anchored by the scratchy, James Brown-style rhythm guitar of Nile Rodgers and the indelible, widely imitated (sometimes outright stolen) bass lines of Bernard Edwards; as producers, they used keyboard and string embellishments economically, which kept the emphasis on rhythm. Chic's distinctive approach not only resulted in some of the finest dance singles of their time, but also helped create a template for urban funk, dance-pop, and even hip-hop in the post-disco era. Not coincidentally, Rodgers and Edwards wound up as two of the most successful producers of the '80s. 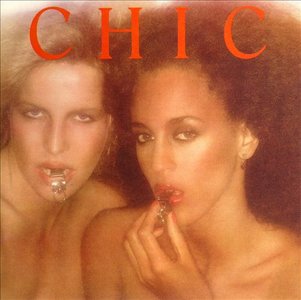 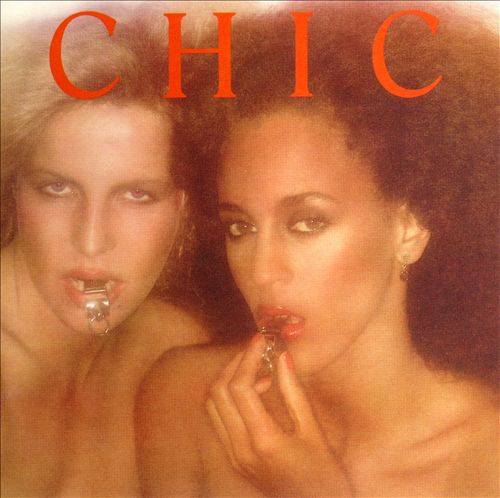 When Chic's self-titled debut album came out in 1978, many rock critics gave it very negative reviews and failed to see just how rhythmically and harmonically exciting Chic's blend of funk, soul, and Euro-disco was. But one critic who often gave Chic favorable coverage was Don Waller, who hit the nail on the head when he exalted the band as "an uptown version of Booker T & the MG's." It was a most insightful analogy – Chic's music was a lot sleeker than Booker T & the MG's raw, instrumental Memphis soul, but like Booker T., the Niles Rodgers/Bernard Edwards team turned out some of the most infectious and influential R&B party grooves of their era. Although not quite as strong as Chic's next two albums – C'est Chic and Risqué – would be, this highly enjoyable album put the group on the map commercially thanks to the infectious hits "Dance, Dance, Dance" and "Everybody Dance." Some rock critics saw Chic as just another faceless disco production, but, in fact, the opposite is true – with this album, Chic fashioned a very distinctive and recognizable sound that proved to be as influential in its era as Booker T & the MGs were in theirs. The sound that Chic established with this album was one that everyone from Queen and ABC to Sister Sledge, the Sugarhill Gang, and Madonna would benefit from. 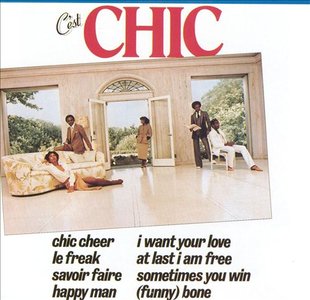 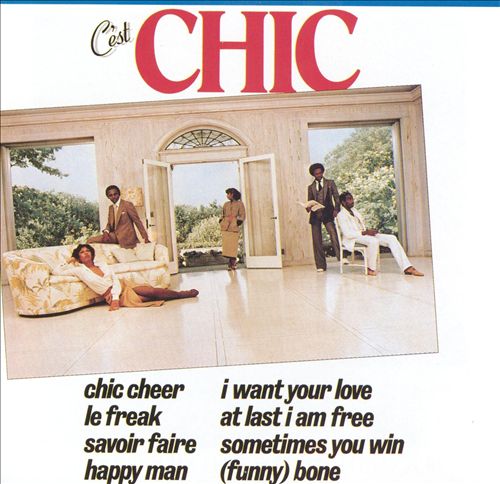 Released in 1978, just as disco began to peak, C'est Chic and its pair of dancefloor anthems, "Le Freak" and "I Want Your Love," put Chic at the top of that dizzying peak. The right album at the right time, C'est Chic is essentially a rehash of Chic, the group's so-so self-titled debut from a year earlier. That first album also boasted a pair of floor-filling anthems, "Dance Dance Dance" and "Everybody Dance," and, like C'est Chic, it filled itself out with a mix of disco and ballads. So, essentially, C'est Chic does everything its predecessor did, except it does so masterfully: each side similarly gets its timeless floor-filler ("Le Freak," "I Want Your Love"), quiet storm come-down ("Savoir Faire," "At Last I Am Free"), feel-good album track ("Happy Man," "Sometimes You Win"), and moody album capper ("Chic Cheer," "[Funny] Bone"). Producers Bernard Edwards and Nile Rodgers were quite a savvy pair and knew that disco was as much a formula as anything. As evidenced here, they definitely had their fingers on the pulse of the moment, and used their perceptive touch to craft one of the few truly great disco albums. In fact, you could even argue that C'est Chic very well may be the definitive disco album. After all, countless artists scored dancefloor hits, but few could deliver an album this solid, and nearly as few could deliver one this epochal as well. C'est Chic embodies everything wonderful and excessive about disco at its pixilated peak. It's anything but subtle with its at-the-disco dancefloor mania and after-the-disco bedroom balladry, and Edwards and Rodgers are anything but whimsical with their disco-ballad-disco album sequencing and pseudo-jet-set Euro poshness. Chic would follow C'est Chic with "Good Times," the group's crowning achievement, but never again would Edwards and Rodgers assemble an album as perfectly calculated as C'est Chic. 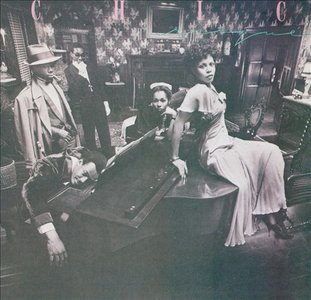 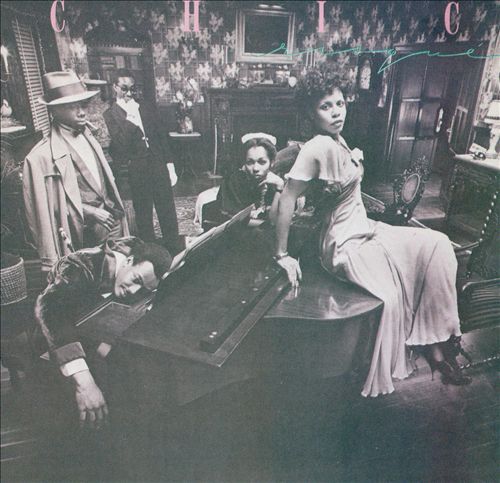 Chic was very much in its prime when it recorded its third album, Risqué, which contained hits that ranged from "My Feet Keep Dancing" and "My Forbidden Lover" to the influential "Good Times." That feel-good manifesto is one of the first songs that comes to mind when one thinks of the disco era and the Jimmy Carter years, but Chic's popularity certainly wasn't limited to the disco crowd. The fact that "Good Times" became the foundation for both the Sugarhill Gang's "Rapper's Delight" and Queen's "Another One Bites the Dust" tells you a lot – it underscores the fact that Chic was influencing everyone from early rappers to art rockers. A group that many rock critics were so quick to dismiss was having an impact in many different areas. From hip-hoppers to new wavers in London and Manchester, Risqué was considered primary listening. And Risqué is impressive not only because of its up-tempo cuts, but also because of slow material that includes the lush "A Warm Summer Night" and the dramatic ballad "Will You Cry (When You Hear This Song)." Risqué is definitely among Chic's essential albums. 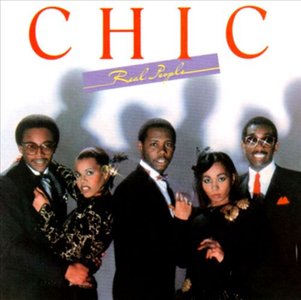 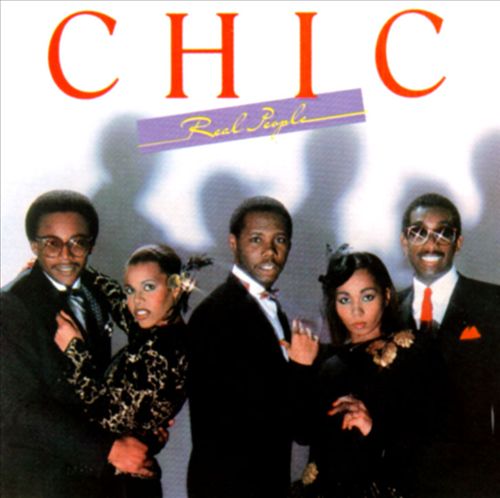 In the early '80s, Chic's influence on other artists was hard to miss. Change, Fantasy, Luther Vandross, the Talking Heads, Grace Jones and Queen were among the many artists who were incorporating elements of the Chic sound. It was ironic and quite amusing to hear some members of the "Death to Disco!" brigade blaring Queen's "Another One Bites the Dust" on their car stereos during the summer of 1980, for that funk-rock ditty was obviously based on "Good Times." But Chic itself was seeing its popularity start to fade, and fans were realizing that the group had reached its creative peak in the late '70s. Like other albums that Chic recorded in the early '80s, Real People is competent but less than essential. Diehard fans will find that while "Rebels Are We," "I Got Protection" and "Chip off the Old Block" are likable and catchy, they aren't in a class with "Good Times" or "Le Freak." This is a decent album, but it's also the work of a group that was past its prime. 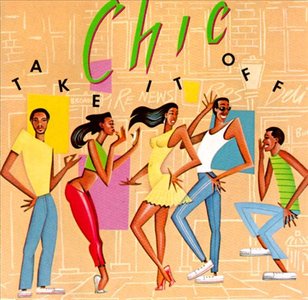 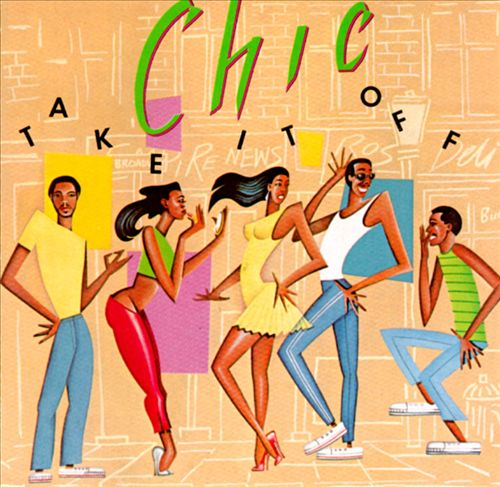 In 1981, a lot of rock & rollers were claiming that the disco era was officially over. Disco, of course, never really died – a lot of the dance-pop, house music, Hi-NRG, and Latin freestyle that was recorded in the '80s and '90s was essentially disco – but as far as many of the radio stations and record company A&R men of 1981 were concerned, disco was dead. And that was bad news for Chic, a group closely identified with the disco era. Even though a lot of Chic's work had as much to do with funk and soul as it did with the Euro-disco sound, Chic was unable to live down its reputation as a disco group. But Nile Rodgers and Bernard Edwards gave it a try with 1981's Take It Off, an admirable, if uneven, project that finds the group downplaying the Euro-disco elements. With R&B and funk as the foundation, Chic tries to branch out by incorporating elements of pop-rock on "Your Love Is Canceled," and jazz on "Flash Back" and "So Fine" (which shouldn't be confused with the "So Fine" that Kashif produced for R&B singer Howard Johnson in 1982). In fact, a few of Rogers' guitar solos give the impression that he'd been listening to a lot of Wes Montgomery. But as likable as the LP is, it didn't contain a major hit – the single "Stage Fright" only made it to #34 on Billboard's R&B singles chart. And for a group that had enjoyed #1 pop and R&B smashes only two and three years earlier, that was certainly disappointing. 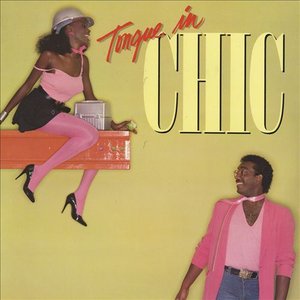 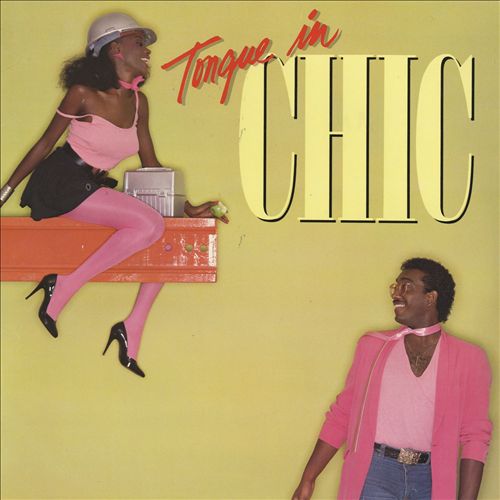 None of the albums that Chic recorded from 1980 to 1983 can be called essential, and none of them are in a class with C'est Chic or Risqué. Even so, they were generally respectable, and they didn't deserve to be ignored. When Tongue in Chic came out in 1982, the only people who were still buying Chic's albums were its most diehard fans. Black radio no longer seemed to be interested, which is ironic because the R&B charts of the early '80s were full of Chic-influenced groups (Change, High Fashion, Fantasy, among many others). Although Tongue in Chic isn't among the group's best albums and didn't contain any radio hits, it isn't a bad album either. "Hangin'," "Chic (Everybody Say)," and "I Feel Your Love Comin' On," demonstrated that Nile Rodgers and Bernard Edwards were still quite capable of providing infectious R&B/funk grooves, and "City Lights" almost sounds like an example of early house music – which isn't all that surprising when you consider that Marshall Jefferson and many other house icons were major Chic fans. 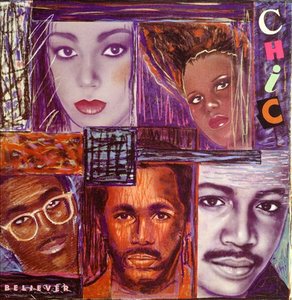 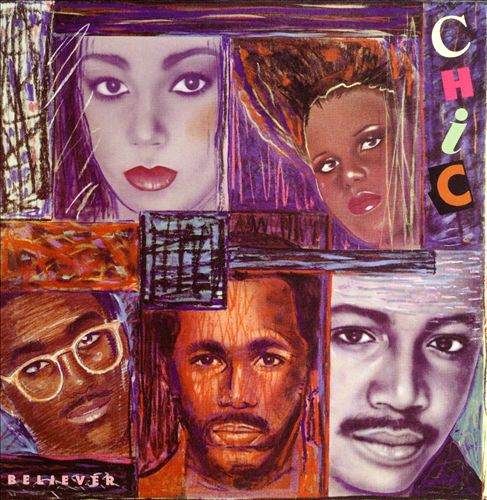 If Prince and Shalamar – two artists who made their recording debuts in the late '70s – could be relevant to the urban contemporary scene of 1983 and even cross over to pop-rock/new wave audiences, why not Chic? Nile Rodgers and Bernard Edwards hoped that Chic could, which is why 1983's Believer finds the group updating its sound with generally appealing, if uneven, results. Using a lot more keyboards and drum machines and favoring a more high-tech production style, Rogers and Edwards sound like they're trying hard to live down their reputation as a late '70s disco act. Urban contemporary considerations are strong, and some of the songs might have reached pop-rock and new wave audiences with the right promotion. The infectious "Party Everybody" contains more rapping than singing, and acknowledges hip-hop's popularity, which is appropriate considering how often hip-hoppers have sampled Chic over the years. And even though Believer falls short of being a gem, you have to admire Chic's ability to update its approach while continuing to sound incredibly distinctive. But the LP didn't contain any hit singles, and Believer would be Chic's last album for Atlantic. Chic broke up in 1985, although they reunited for 1992's uneven Chic-ism and 1996's superb Live at the Budokhan (neither of which were big sellers). The ironic thing is that while Rodgers and Edwards were very much in demand as producers during the '80s (when Rodgers produced such superstars as Duran Duran, Madonna, David Bowie, and the B-52s, and Edwards worked with the Power Station, Rod Stewart, Robert Palmer, and Jody Watley, among others), Chic itself never returned to the top of the charts. 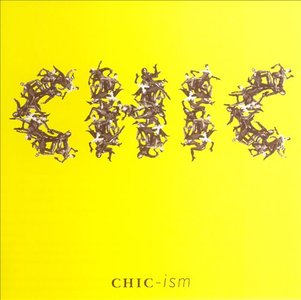 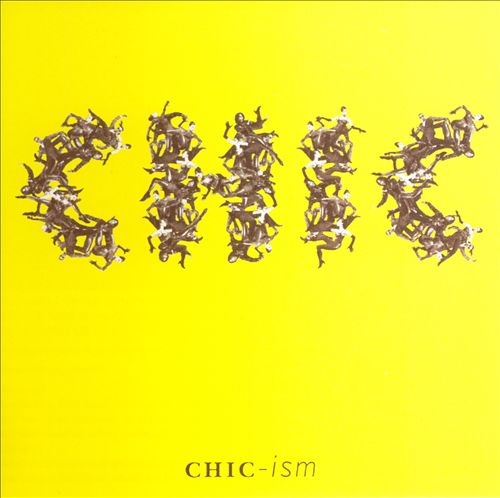 "Doin' That Thing to Me" contains a reference to the mythological wizard Merlin in its lyrics. By some strange twist of nature, mythology was certainly at work when those reviewing Chic-Ism on its release in 1992 dismissed it purely because Chic were old hats. In actuality, the worst thing about it is the cover. Chic-Ism certainly isn't likely to make album of the century listings, but as Chic albums go, it's fine if a tad '80s, which is to be expected as it was recorded only two years into the '90s. What were critics expecting of Chic – synthesizers à la Kraftwerk? Kicking in with the infectious "Chic Mystique," a little too long at six and a half minutes, it's pretty much business as usual. This leads into "Your Love" and "Jusagroove," both keeping pace before slowing down for "One and Only One." "In It to Win It" is a perfect update of their New York disco-funk style, a recipe that bands like the Brand New Heavies emulated in later years. The last stretch of the album includes "High," a beauty that is close enough a slowed down "Good Times." "MMFTCF (Make My Funk the Chic Funk)" and a better edited reprise of "Mystique" conclude.