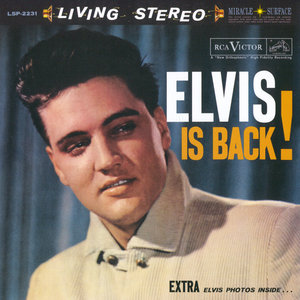 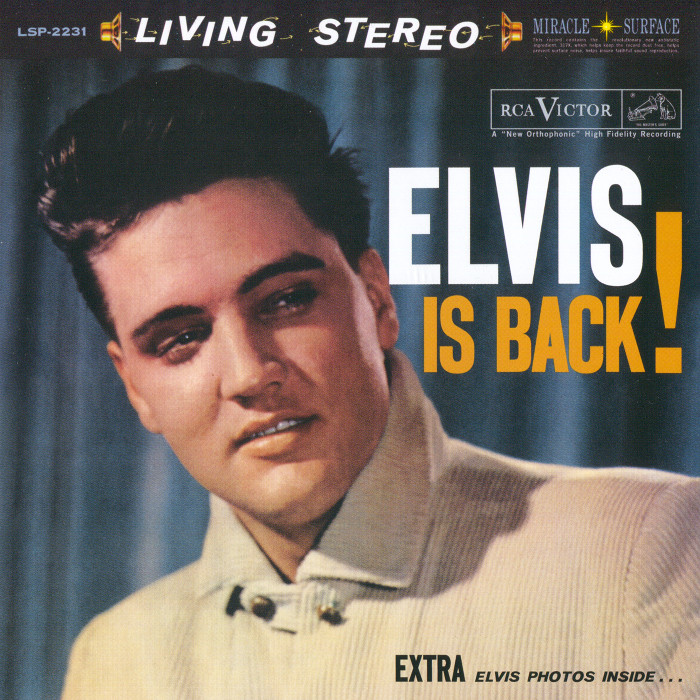 Elvis Is Back! is the tenth album by Elvis Presley, released on RCA Victor Records in mono and stereo, LPM/LSP 2231, in April 1960. Recording sessions took place on March 20 and April 3, 1960, at RCA Studio B in Nashville, Tennessee. It was Presley’s first album to be released in true stereo. It peaked at number two on the Top Pop Albums chart and is listed, along with his debut and From Elvis in Memphis, in the book 1001 Albums You Must Hear Before You Die. It was certified Gold on July 15, 1999, by the RIAA.

Although they have common recording origins, two of the three singles, “It’s Now or Never” and “Are You Lonesome Tonight,” were very quirky by the standards of Elvis songs at the time — the former inspired by Elvis’s admiration for Tony Martin’s 1949 hit “There’s No Tomorrow,” while the latter was recorded at the request of Col. Parker as a favor to his wife. They add to the diversity of sounds on this record, which shows a mature Elvis Presley. “Dirty, Dirty Feeling” and “It Feels So Right” showed he could still rock out and challenge authority and propriety, while “Reconsider Baby” and “Like a Baby” offer some of his best blues performances; but “The Thrill of Your Love” (a very gospel-tinged number), “Soldier Boy,” “Girl of My Best Friend,” and “Girl Next Door Went a’ Walking,” also displayed the rich, deep vocalizing that would challenge critics’ expectations of Elvis Presley playing rhythm guitar throughout. He also comes off better than on any of his other albums since arriving at RCA, as a musician as much as a “star” (he’d always had a lot more to say about running his sessions than the critics who loathed his RCA years indicated). [The 1999 remastering of this classic album features the complete contents of the March 20, 1960, RCA Hollywood session plus the dawn-to-dusk April 2 Nashville session that rounded out the album, for a total of 18 songs, including the three singles and their B-sides from those sessions. The sound is extraordinarily close yet natural, giving the listener full value for the presence of Scotty Moore, Hank Garland (who also plays bass on a few tracks), D.J. Fontana, Boots Randolph, and Floyd Cramer.]