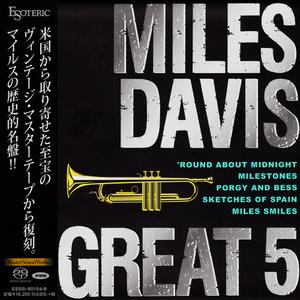 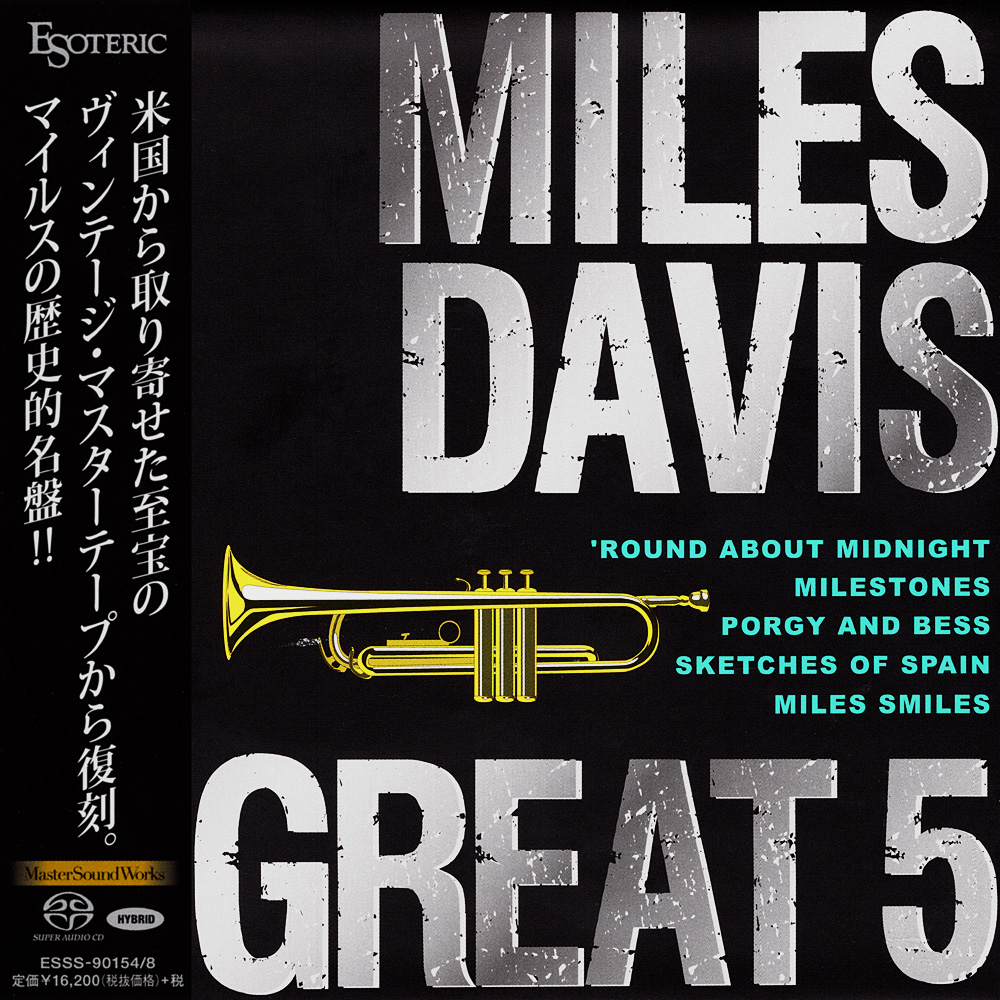 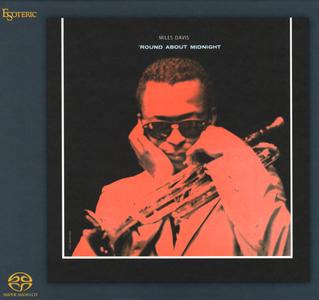 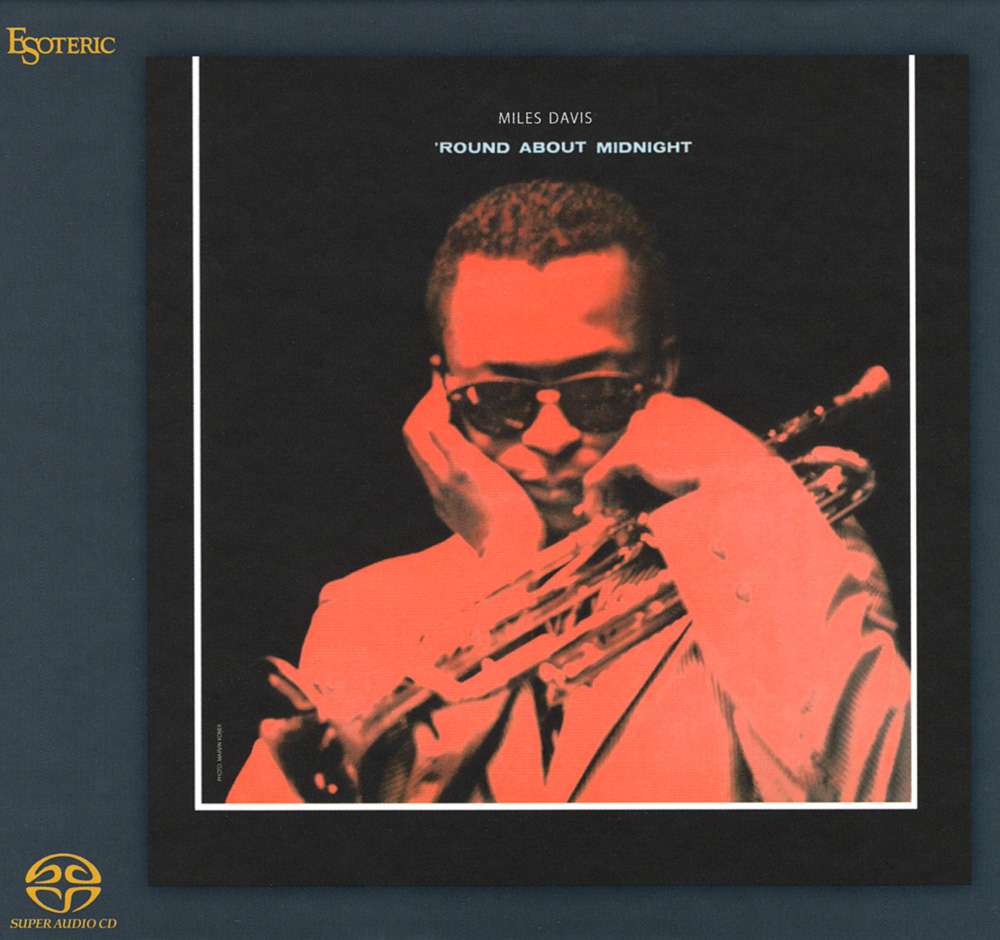 Given that 'Round About Midnight was Miles Davis' debut Columbia recording, it was both a beginning and an ending. Certainly the beginning of his recording career with the label that issued most if not all of his important recordings; and the recording debut of an exciting new band that had within its ranks Philly Joe Jones, Paul Chambers, pianist Red Garland, and an all but unknown tenor player named John Coltrane. The title track was chosen because of its unique rendition with a muted trumpet, and debuted at the Newport Jazz Festival the summer before to a thunderous reception. The date was also an ending of sorts because by the time of the album's release, Davis had already broken up the band, which re-formed with Cannonball Adderley a year later as a sextet, but it was a tense year. When Coltrane moves in for his break, rather than Davis' spare method, he smatters notes quickly all though the melodic body of the tune and Garland has to compensate harmonically, moving the mode and tempo up a notch until his own solo can bring it back down again. Which he does with a gorgeous all-blues read of the tune utilizing first one hand and then both hands to create fat harmonic chords to bring Davis back in to close it out. It's breathtaking how seamless it all is. There's little else to say except that 'Round About Midnight is among the most essential of Davis' Columbia recordings. 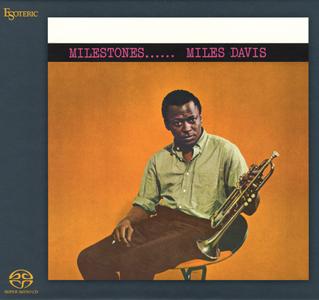 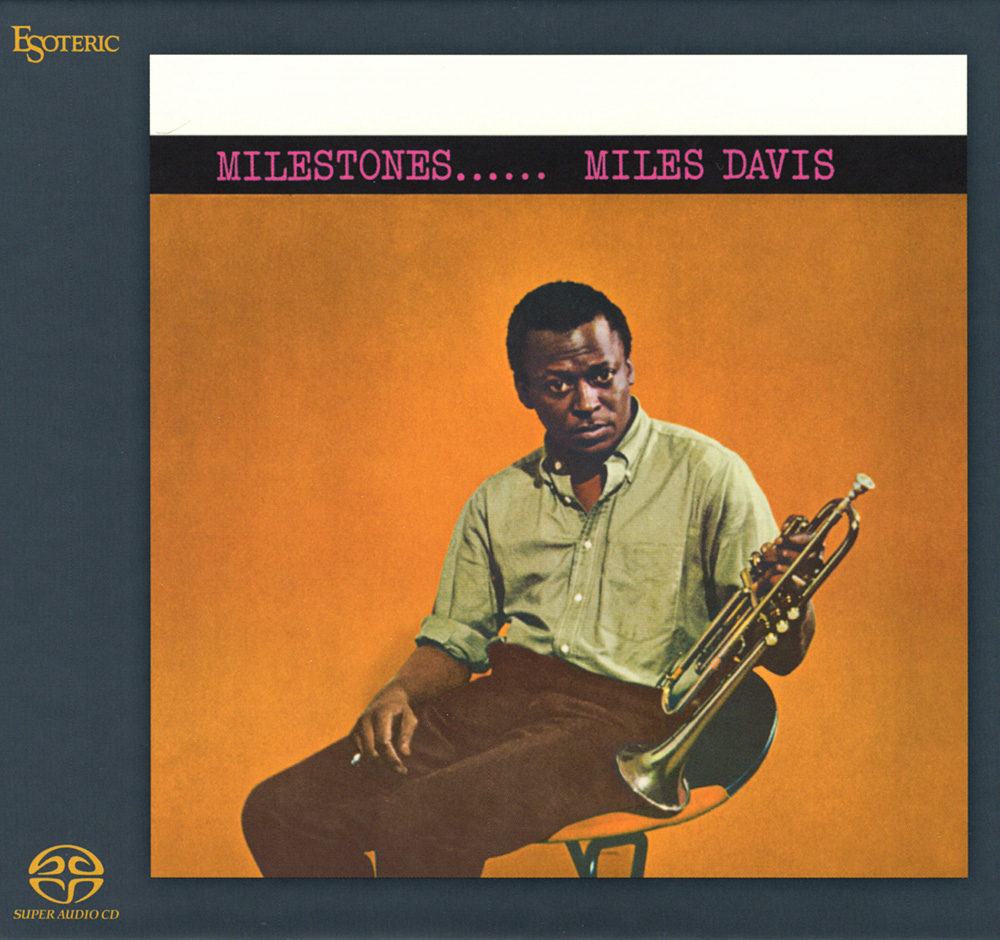 What is immedately noticeable upon listening to Miles Davis' classic first – and only – album with his original sextet is how deep the blues presence is on it. Though it's true that the album's title cut is rightfully credited with introducing modalism into jazz, and defining Davis' music for years to come, it is the sole selection of its kind on the record. The rest is all blues in any flavor you wish you call your own. For starters, there's the steaming bebop blues of "Dr. Jackle," recorded in 1955 for a Prestige session with Jackie McLean. Davis is still in his role as a trumpet master, showing a muscularity of tone that reveals something more akin to Roy Eldridge or Louis Armstrong than Dizzy or Fats Navarro. The tempo is furious, as all the members of the sextet solo except for Jones. The saxophonists trade choruses and come off sounding like mirrored images of one another in the slower, post-bop blues that is "Sid's Ahead," which is followed by "Two Bass Hit," written by Dizzy and John Lewis. It's an off-kilter blues with a wide middle section, no doubt for Lewis' piano to fill. But then comes "Milestones" with its modal round and interval, where harmony is constructed from the center up. It is a memorable tune for not only its structure and how it would inform not only Davis' own music, but jazz in general for the next seven years. The album's closer is Monk's "Straight, No Chaser," which became a signature tune for the sextet even when Garland and Jones left to be replaced by Bill Evans and Jimmy Cobb, and later Evans by Wynton Kelly. 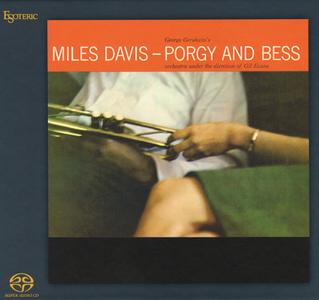 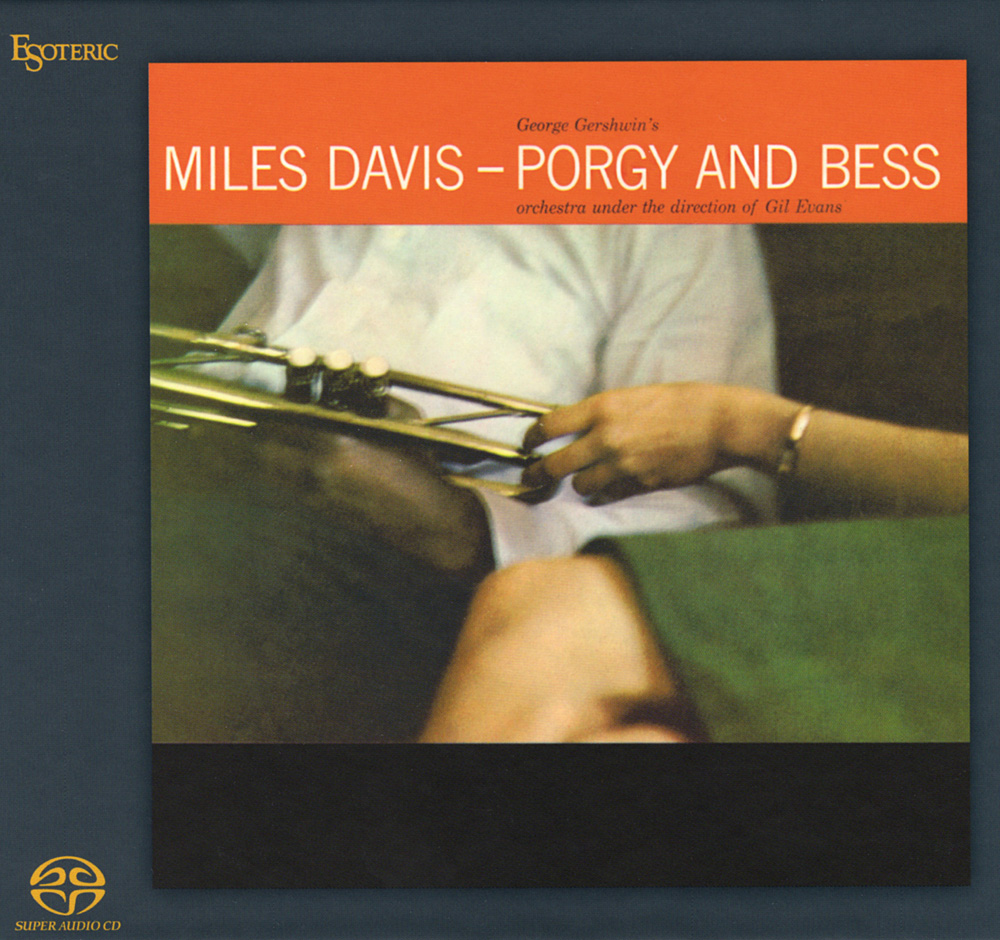 Tomes are available annotating the importance of this recording. The musical and social impact of Miles Davis, his collaborative efforts with Gil Evans, and in particular their reinvention of George Gershwin's Porgy and Bess are indeed profound. However, the most efficient method of extricating the rhetoric and opining is to experience the recording. Few other musical teams would have had the ability to remain true to the undiluted spirit and multifaceted nuance of this epic work. However, no other musical teams were Miles Davis and Gil Evans. It was Evans' intimate knowledge of the composition as well as the performer that allowed him to so definitively capture the essence of both. The four dates needed to complete work on Porgy and Bess include contributions from several members of his most recent musical aggregate: Julian "Cannonball" Adderley (alto sax), Paul Chambers (bass), and Jimmy Cobb (drums). Although the focus and emphasis is squarely on Davis throughout, the contributions of the quartet on "Prayer (Oh Doctor Jesus)," "I Loves You, Porgy," and "There's a Boat That's Leaving Soon for New York" are immeasurable. They provide a delicate balance in style and, under the direction of Evans, incorporate much of the same energy and intonation here as they did to their post-bop recordings. There is infinitely more happening on Porgy and Bess, however, with much of the evidence existing in the subtle significance of the hauntingly lyrical passages from Danny Banks' (alto flute) solos, which commence on "Fishermen, Strawberry and Devil Crab." Or the emotive bass and tuba duet that runs throughout "Buzzard Song." The impeccable digital remastering and subsequent reissue – which likewise applies to the Miles Davis & Gil Evans: The Complete Columbia Studio Recordings box set – only magnifies the refulgence of Porgy and Bess. Likewise, two previously unissued performances have been appended to the original baker's dozen. No observation or collection of American jazz can be deemed complete without this recording. 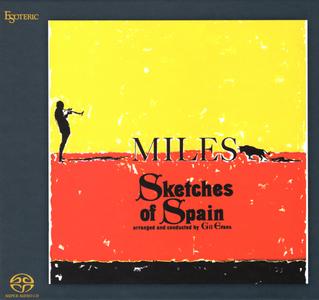 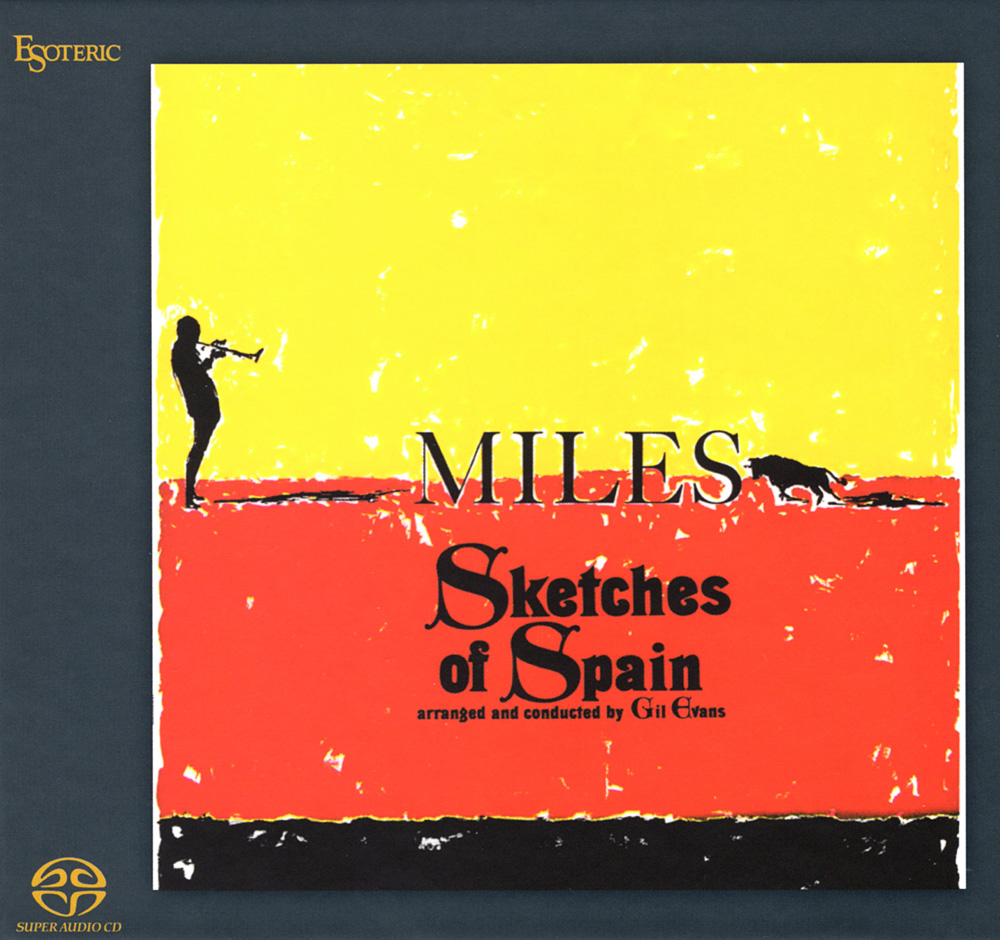 Along with Kind of Blue, In a Silent Way, and Round About Midnight, Sketches of Spain is one of Miles Davis' most enduring and innovative achievements. Recorded between November 1959 and March 1960 – after Coltrane and Cannonball Adderley had left the band – Davis teamed with Canadian arranger Gil Evans for the third time. Davis brought Evans the album's signature piece, "Concierto de Aranjuez," after hearing a classical version of it at bassist Joe Mondragon's house. Evans was as taken with it as Davis was, and set about to create an entire album of material around it. The result is a masterpiece of modern art. On the "Concierto," Evans' arrangement provided an orchestra and jazz band – Paul Chambers, Jimmy Cobb, and Elvin Jones – the opportunity to record a classical work as it was. The piece, with its stunning colors and intricate yet transcendent adagio, played by Davis on a flügelhorn with a Harmon mute, is one of the most memorable works to come from popular culture in the 20th century. Davis' control over his instrument is singular, and Evans' conducting is flawless. Also notable are "Saeta," with one of the most amazing technical solos of Davis' career, and the album's closer, "Solea," which is conceptually a narrative piece, based on an Andalusian folk song, about a woman who encounters the procession taking Christ to Calvary. She sings the narrative of his passion and the procession – or parade – with full brass accompaniment moving along. Cobb and Jones, with flamenco-flavored percussion, are particularly wonderful here, as they allow the orchestra to indulge in the lushly passionate arrangement Evans provided to accompany Davis, who was clearly at his most challenged here, though he delivers with grace and verve. Sketches of Spain is the most luxuriant and stridently romantic recording Davis ever made. To listen to it in the 21st century is still a spine-tingling experience, as one encounters a multitude of timbres, tonalities, and harmonic structures seldom found in the music called jazz. 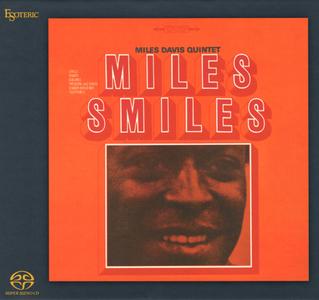 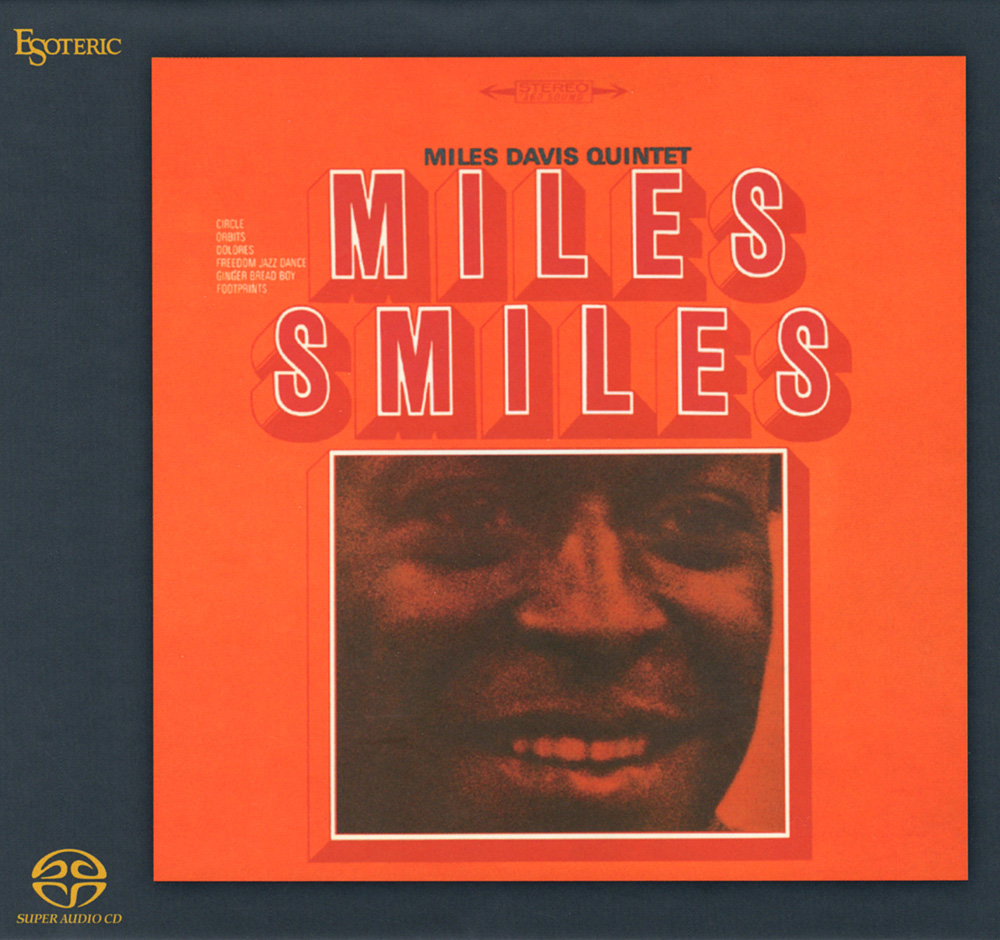 With their second album, Miles Smiles, the second Miles Davis Quintet really began to hit their stride, delving deeper into the more adventurous, exploratory side of their signature sound. This is clear as soon as "Orbits" comes crashing out the gate, but it's not just the fast, manic material that has an edge – slower, quieter numbers are mercurial, not just in how they shift melodies and chords, but how the voicing and phrasing never settles into a comfortable groove. This is music that demands attention, never taking predictable paths or easy choices. Its greatest triumph is that it masks this adventurousness within music that is warm and accessible – it just never acts that way. No matter how accessible this is, what's so utterly brilliant about it is that the group never brings it forth to the audience. They're playing for each other, pushing and prodding each other in an effort to discover new territory. As such, this crackles with vitality, sounding fresh decades after its release. And, like its predecessor, ESP, this freshness informs the writing as well, as the originals are memorable, yet open-ended and nervy, setting (and creating) standards for modern bop that were emulated well into the new century. Arguably, this quintet was never better than they are here, when all their strengths are in full bloom.

ESOTERIC equipment used for re-mastering:
The criterion of re-mastering is to faithfully capture the quality of the original master. ESOTERIC′s flag ship D/A converters, model D-01VU, Rubidium master clock generator model G-0Rb and ESOTERIC MEXCEL interconnect cables and power cords, were all used for this re-mastering session. This combination of highly advanced technology greatly contributed to capturing the high quality sound of the original master.