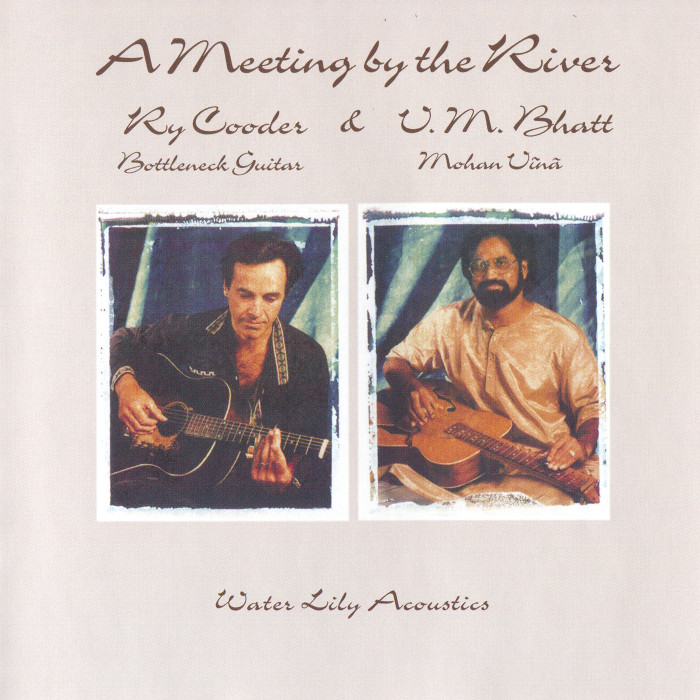 A Meeting by the River can best be described as a spontaneous outpouring of music, unhindered by convention or form, brought into being by musicians so supremely capable that the music is never labored, the technique of their craft always subservient to the final product. Cooder and Bhatt are genuine masters of the guitar and mohan vina, respectively. The latter, an instrument created by Bhatt himself, is a sort of hybrid between a guitar and a vichitra vina, and is played with a metal slide. This fact is just one of the many things that connect Bhatt's playing to Cooder's, who plays nothing but bottleneck guitar here. The musical interplay between Cooder and Bhatt is nothing short of astounding, especially so considering that they met for the first time only a half-hour before the recording of this album. The voices of the two instruments blend marvelously, first alternating melodic statements, then doing so together, each dancing around the other, playing cat and mouse, probing, answering, reflecting. They are ably accompanied by a pair of percussionists: tabla player Sukhvinder Singh Namdhari and Cooder's own son, Joachim, on dumbek. A Meeting by the River is one of those few cross-genre albums in which the listener never feels for a second that there is some kind of fusion going on; one does not hear the component parts so much as the integrated whole. However, one can theoretically separate guitar from vina, America from India, the Mississippi from the Ganges. Once this is done, the resulting music makes more sense than ever before, the combination of two traditions of stringed instruments that use slides to produce sound and value improvisation and voice-like phrasing. As good as this sounds on paper, the actual results are even more impressive. The splendor of the music is aided in its transmission by the fact that, like all Water Lily Acoustics releases, this album is masterfully recorded; each instrument is clear, distinct, and three-dimensional sounding. A Meeting by the River is a must-own, a thing of pure, unadulterated beauty, and the strongest record in Cooder's extensive catalog.