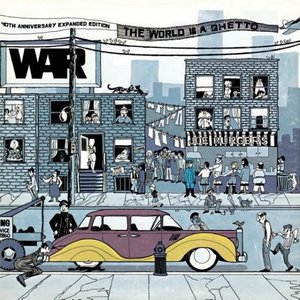 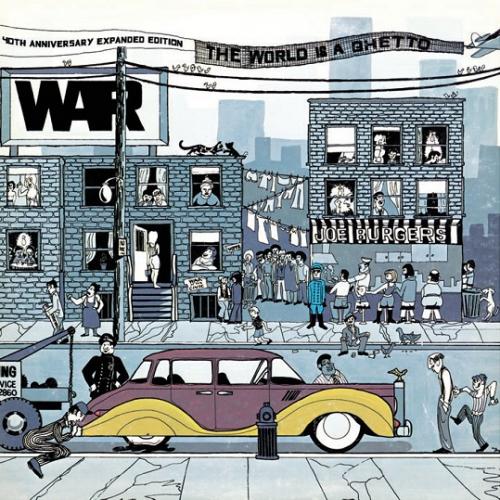 War was the original jam band; their music is a thick stew of stone funk, old school R&B, Latin rhythms, free-form jazz and uncanny pop sensibility. Their late ’72 album release The World Is A Ghetto, led by the title track and the smash hit “The Cisco Kid,” became the best-selling pop album of 1973. To commemorate the album’s place in pop music history, Avenue Records and UMe have remastered the album and included unreleased bonus “Ghetto Jams,” showcasing more of the band’s versatility. The World Is A Ghetto now includes the chugging “Freight Train Jam,” “58 Blues” and the rock-blues track “War Is Coming”.

War's third album as an act separate from Eric Burdon was also far and away their most popular, the group's only long-player to top the pop charts. The culmination of everything they'd been shooting for creatively on their two prior albums, it featured work in both succinct pop-accessible idioms ("The Cisco Kid," etc.) as well as challenging extended pieces such as the 13-minute "City, Country, City" – which offered featured spots to all seven members without ever seeming disjointed – and the title track, and encompass not only soul and funk but elements of blues and psychedelia on works such as the exquisite "Four Cornered Room." "The Cisco Kid" and "The World Is a Ghetto" understandably dominated the album's exposure, but there's much more to enjoy here, even decades on. Beyond the quality of the musicianship, the classy, forward-looking production has held up remarkably well, and not just on the most famous cuts here; indeed, The World Is a Ghetto is of a piece with Marvin Gaye's What's Going On and Curtis Mayfield's Curtis, utilizing the most sophisticated studio techniques of the era. Not only does it sound great, but there are important touches such as the phasing in "Four Cornered Room," not only on the percussion but also on the vocals, guitars, and other instruments, and the overall effect is a seemingly contradictory (yet eminently workable) shimmering blues, even working in a mournful and unadorned harmonica amid the more complex sounds.

About the Mastering:
This project, from the original album to the four newly discovered bonus tracks, was created from the original analog masters provided by the group’s producer, Jerry Goldstein. All materials were sourced and mastered by Pete Doell at Universal Mastering Studios-West at 96kHz/24-bit.