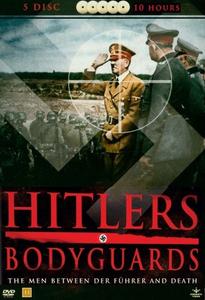 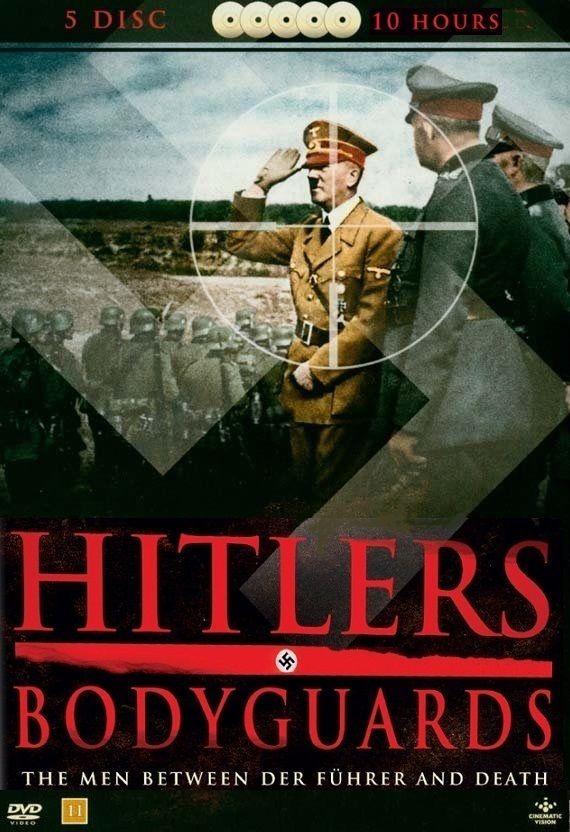 Rare glimpses inside Hitler's inner circle. Hitler's Bodyguard tells the fascinating story of jealousy, betrayal and murder and what it was like to protect the biggest villain in history from bombs, snipers, plots, maniacs, poison gas and Allied assassination attempts. This is the detailed story of Hitler's survival from a very new angle. A dramatic and in-depth series analyzes the motives and methodology of the individuals and organizations that planned to kill Hitler.
For the first time thanks to previously unseen SS records and images, this series provides a unique insight into the men that guarded Hitler and explores one of the most enduring and unanswered questions surviving from World War II – why, in 25 years, did no-one manage to kill Adolf Hitler? How did Adolf Hitler manage to survive more than 40 assassination attempts - some by his own generals? Using captured SS documents and eyewitness interviews, this documentary series reveals the secrets of the elite bodyguards who swore loyalty oaths to the Fuhrer himself and their protection techniques. It explains how Hitler cultivated rivalries among his security services to ensure his safety, and how his purposefully unpredictable behavior saved his life several times.
Causing the deaths of 50 million people, Adolf Hitler became one of the 20th century's most iconic hate figures. Despised by those he persecuted, and even by some of his own commanders, Hitler's life was constantly in danger as he spread his tyranny throughout Europe. As he developed from shock politician to supreme leader of Nazi Germany, he collected a long list of enemies along the way.
Protecting Hitler was one of the world's toughest jobs. During his time in power he survived over 40 attempts on his life thanks to his fearless bodyguards. These included perhaps his closest and most trusted bodyguard Bruno Gesche, a tough street fighter. In return, Hitler repaid Gesche by promoting him to his personal bodyguard crew and this rock-solid inner circle repelled assassination attempt after assassination attempt.
The series, narrated by Robert Powell, looks in greater detail at these plots, from Hitler's early political career where he knew he was a marked man to the infamous Stauffenberg plot. Carefully assembled archival footage offers rare glimpses inside Hitler's infamous strongholds - the Berghof, the Wolf's Lair, and the Berlin bunker. Computer-generated graphics detail the security measures used in his trains, planes, and touring cars. And meticulous re-enactments bring lost incidents to life. Hitler's Bodyguard also reveals why Churchill and Roosevelt did nothing to directly harm him or try to assassinate him. In 13 riveting episodes, this Military Channel favorite brings fresh, fascinating context to the 20th century's most evil and destructive tyrant.

Part 1: How Hitler's Bodyguard Worked
This program shows how Hitler's Bodyguard helped him cheat death on so many occasions. In the 1920s, Hitler recruited street-fighting bullies to guard party meetings. They would soon become known as the SA. As Hitler's career evolved, the SA grew and their rival SS was created and competed for the powerful position of guarding Hitler.
Hitler's personal protection squad grew from a few fiercely loyal, handpicked ruffians recruited to protect political meetings and fight opponents on the streets into an army with a complicated structure and intense internal competition, including some of the most fearsome secret police and paramilitary forces the world has ever known.


Part 2: Early Attempts on Hitler's Life
Beer hall brawls, street fighting, and several brushes with death marked Hitler's rise to power in the stormy politics of interbellum Germany. As Adolf Hitler clawed his way closer to power, his extremist policies brought him a host of enemies, some of whom were only too eager to see him dead.
The rivalry between the SA and the SS heats up as Hitler's power grows. Hermann Goering and Ernst Roehm square off in their attempts to get closer to their rising leader. Hitler's near fatal revolt and subsequent arrest serve to promote his ambition.


Part 3: Kill the New Chancellor
In January 1933, Hitler achieved his goal of becoming Chancellor of Germany. During Hitler's first year in office – as he steered Germany abruptly towards tyranny – he faced no fewer than a dozen attempts on his life.
For his Bodyguard, Hitler's brutal rise to power had already earned him many enemies, and the savage in-fighting between Nazi chieftains for control of Hitler's Bodyguard was as bloodthirsty as the attempts to kill the new Chancellor were thwarted. These threats become serious attempts when Hitler seizes absolute power after the burning of the Reichstag.


Part 4: Night of the Long Knives
As Adolf Hitler brutally consolidated his dictatorship in Germany and wiped out all opposition, the most serious threat to his rule came from an unexpected source - one of his oldest comrades who led the massive paramilitary army, which had played a vital role in bringing him to power.
In one bloody, well-planned purge Hitler eliminated his political rivals and ended the looming threat from Ernst Roehm's well-armed Sturmabteilung. A storm is brewing as the SA grows into a force of more than 4 million. Roehm's ambition is to make the SA the main power in the Nazi state. The SA has become most serious threat to Hitler's survival. It is rumored to be plotting his overthrow.


Part 5: Jewish and Emigre Attempts to Kill Hitler
As the Nazis amped up their anti-Semitic and expansionist activities, Jewish groups, Soviet Communists, and Otto Strasser's rival Black Front all targeted Hitler.
Within a few months of Hitler becoming dictator of Germany, his enemies increase enormously. Prague's Black Front poses a particular threat shortly after Hitler becomes Chancellor as German Jews try to strike back against Nazi officials. The persecution of the Jews leads to several attempts to kill him. Students, organizations and the Soviet Union all contemplate or attempt killing Hitler. But Hitler's security proved equal to the task of keeping him alive.


Part 6: Kill Hitler before War Starts
This episode covers the period from 1938 to the invasion of Poland in 1939. By 1938, Hitler was on the road to war and makes his aggressive intentions clear. Occupations of Austria and Czechoslovakia enormously increase his personal enemies, leading to serious attempts on his life which were foiled by chance as much as by his elaborate security system.
People inside and outside – including some of Hitler's senior military personnel – planned preemptive strikes against the Fuhrer, plotting to overthrow and kill Hitler. A plan that would have him arrested and likely killed, but their schemes diminish with the invasion of Poland.


Part 7: Bombs and Paranoia
During 1938, Hitler annexed Austria and the German speaking areas of Czechoslovakia into the Third Reich. Faced with whole populations of hostile people, the 'Desert Fox' elite army unit was formed. Rommel is put in charge of a new unit of bodyguards for the Fuehrer in 1939, just before the invasion of Poland. And, in a Munich beer hall, an attempt on Hitler's life fails.
As Hitler begins his aggressive expansion, the German army sets up a special unit of trained soldiers to guard his military headquarters and escort him on visits to the front. Elser is arrested after Hitler comes close to being killed by his bomb. Convinced that a failed bomb plot had roots in England, a Gestapo counterintelligence officer engineered an elaborate sting to snatch British agents.


Part 8: Dangerous Car Journeys
While following his armies during the Blitzkriegs in Poland and France, Hitler puts himself in danger. In 1940, Hitler intensified his war efforts, invading France. His preferred mode of travel was by car, and Ferdinand Porsche designed large Mercedes for him with every possible security feature.
Hitler was a car fanatic and loved cars. His liking of touring through cheering crowds in a customized, open-top Grosser Mercedes and later G4 – was a predilection giving his bodyguards nightmares. Those crowds could easily harbor assassins.


Part 9: Flights into Danger
One of the first politicians to use campaign flights, Hitler eventually exposed himself to assassination attempts while touring his conquered lands by air. Hitler appreciated the power of aircraft, not only as a military weapon, but as a political tool. During the early 1930s, he hired aircraft for election campaigning, often facing weather and mechanical problems, as well as specific assassination attempts.
Hitler employed a former World War 1 air ace Hans Baur as his personal pilot, and the Fuehrer was so impressed by his skill that he never allowed anyone else to fly him again. Baur became one of his key bodyguards, and his skill was critical when war came.


Part 10: Hitler's Dangerous Train Journeys
British operatives targeted Hitler's special train, the Fuhrer-Sonderzug – a rolling fortress on rails – despite its heavy armor and tight security measures.
As Hitler began the aggression which swiftly engulfed Europe in a devastating war, he realized that he needed a mobile military headquarters from which he could direct his armies and follow their progress. In which his Bodyguard could protect him from his rapidly-growing host of enemies…The result was the Fuehrersonderzug, the Fuehrer's Special Train. Code named 'Amerika', this became an armored monster with anti-aircraft armament and state-of-the-art communications.


Part 11: Attempts to Kill Hitler at the Wolf's Lair
Heavily camouflaged and fortified, Hitler's military headquarters in Poland saw several assassination attempts – including the one that came closest to succeeding.
The Wolfschanze - his Wolf's Lair near Rastenburg - was the most famous of Hitler's military headquarters. Deep in the forests of East Prussia, it was from here that the Nazi warlord directed the titanic battles against the Soviet Union which would decide the fate of his Third Reich. The Wolf's Lair was closely guarded, but Hitler was almost killed by the bomb ignited by Stauffenberg on 20 July 1944.


Part 12: Nearly Assassinated at the Berghof
The Berghof, near Berchtesgaden in the Bavarian Obersalzberg, was the nearest Hitler had to a home. He bought it with the proceeds of Mein Kampf, and here he was surrounded by close colleagues and their families, and could relax amid the mountain scenery. Hitler's Alpine retreat offered opportunities for a pistol-packing German officer, a sniper, a long-range bombing raid, and even an aerial assault by the Allies.
For Hitler, the Berghof was a very special place. What had started as a small Alpine cottage soon became the powerhouse where Hitler developed the plans that would injure and kill millions of people across Europe.


Part 13: Poison Gas Plot in the Bunker
Hitler's last gasp offensive, the Battle of the Bulge, had been defeated and he fled back to Berlin. Now, as the Soviet juggernaut smashed its way into the heart of the Nazi capital, Hitler was left to make the choice - should he kill himself, or should he face the wrath of the world he had devastated?
By early 1945, Hitler was held up in his bunker deep beneath the Reichschancellery as the Red Army surrounded Berlin. During Hitler's last few months he did not leave his bunker. His leading supporters and officers plot to either kill Hitler or escape the bunker and negotiate with the Allies to save their own skins, few were with him to the end. One member of Hitler's inner circle later claimed to have contemplated flooding the Fuhrer's Berlin bunker with nerve gas as the Allies closed in. 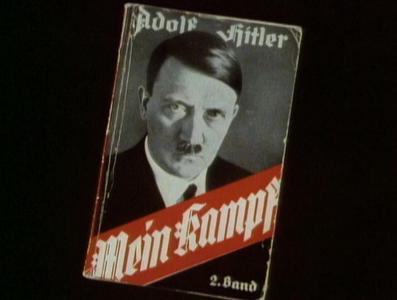 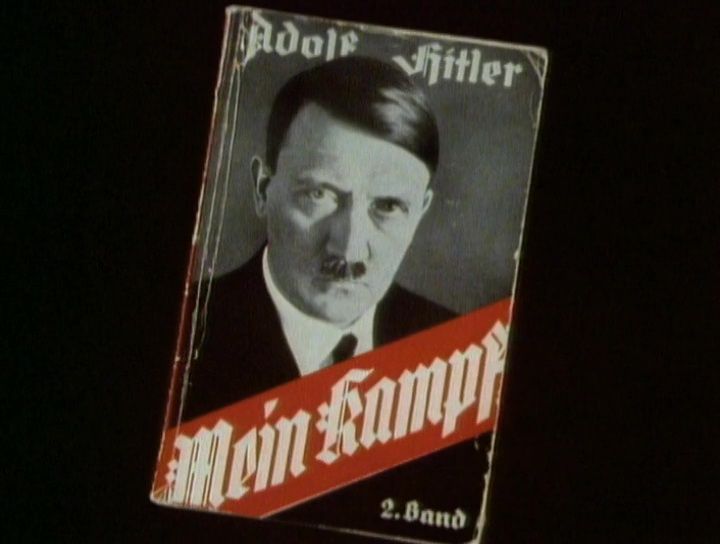 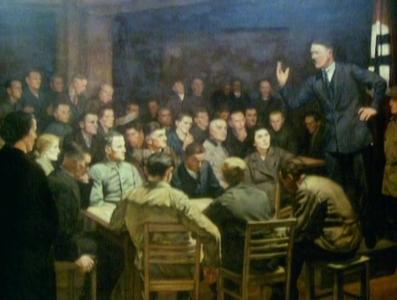 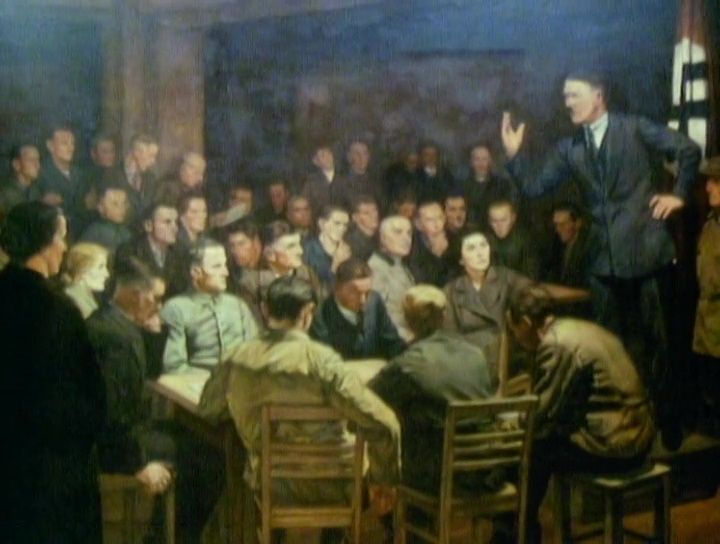 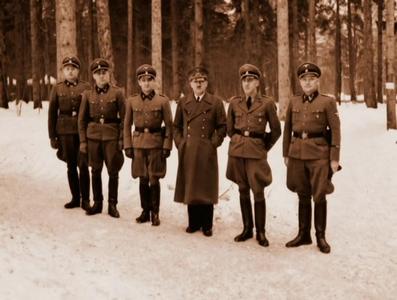 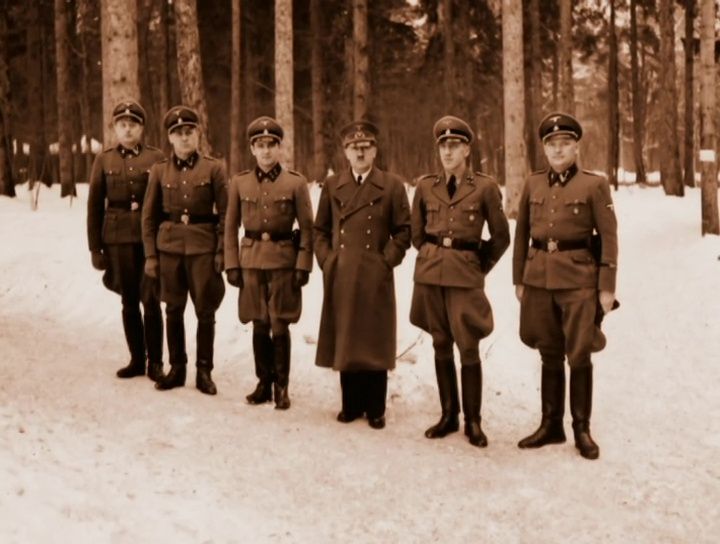