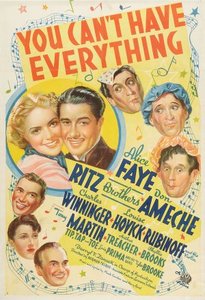 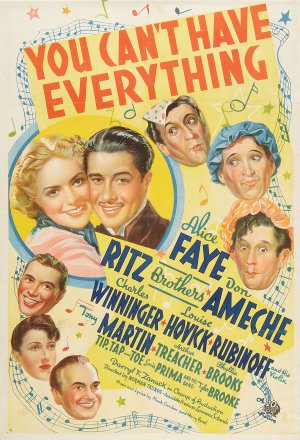 Alice Faye stars as aspiring playwright Judith Poe Wells. She falls in love with producer George Macrae (Don Ameche), which makes George's girlfriend Louise Hovick (Gypsy Rose Lee) see red. Judith drops from view while George loses his troublesome girlfriend and prepares to put together a Broadway musical. He chooses Judith's play for his next production, which of course reunites the pair at fadeout time. And how do The Ritz Brothers fit into You Can't Have Everything? Not very well, but the Ritzes do have one funny elongated number set in a Greenwich Village nightclub (where the extras are obviously breaking up at the boys' adlibs).

"You Can't Have Everything" is a splendidly tuneful, enormously entertaining Fox musical, directed by Norman Taurog, starring Alice Faye, Don Ameche, Charles Winninger, and, of course, the Ritz Brothers. This is one of three splendid & spirited musicals Alice Faye made at Fox in 1937. The other two are "On the Avenue" and "Wake Up and Live".

Faye, sweet and vulnerable, plays an impoverished playwright named Judith Poe Wells, a descendant of Edgar Allan Poe, who writes plays livid with social significance and realism. She is convinced that it is her sacred duty to live up to the talent her family inherits. As the film opens, Judith accidentally meets a handsome Broadway insider named George Macrae (Ameche) in a Romano Italian restaurant when she fails to pay her plate of spaghetti. Macrae falls in love with Judith and persuades her to turn her into a showbiz sensation. But Judith is not interested in musical comedies or what she calls "usual George Macrae tripe". Rather, she wants serious dramas that depict life's struggles and harshness. Much to Judith's dismay, Macrae nevertheless tells his boss Sam Gordon (Winninger) about her play "North Winds" ("a play about the vital problems that confront womanhood in the frozen north") and ways of turning it into a musical comedy. Macrae's former girl Lulu (Gypsy Rose Lee) shows up and spoils the show by revealing something about Macrae's past and one night while he was drunk.

The Ritz Brothers, for once, are immensely enjoyable as their perform their remarkable comic acts and musical numbers. Their acts are perfectly integrated with the story. It was really a hoot to watch them. Also the film features a fantastic dance specialty by Tip, Tap, Toe, which anticipate those by Nicholas Brothers in the later Fox musicals.

Among the musical highlights, my absolute favorites are Faye's poignant rendition of the title tune (which kind of reminded me of her unforgettable "You'll Never Know" number in the classic 1943 musical "Hello, Frisco, Hello"), and the lively "Danger, Love at Work". But that's not all. Also look for "Afraid to Dream" and "Please Pardon Us We are in Love".

Don't miss "You Can't Have Everything" if you love all-time classic musicals.
IMDB Reviewer