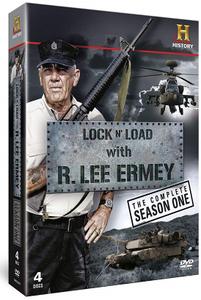 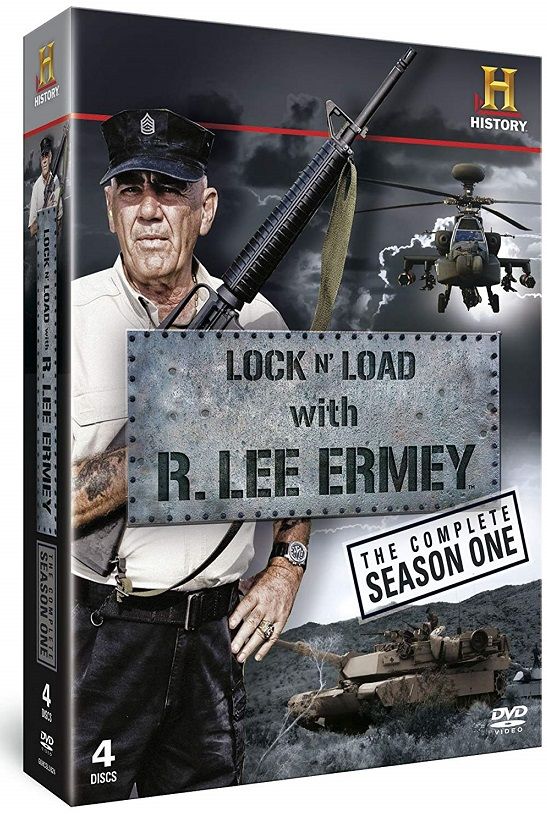 Gunny's back — Marine Corps veteran R. Lee Ermey, acclaimed for his role as a Marine Drill Instructor in the movie Full Metal Jacket, previously hosted the popular "Mail Call" show on the History Channel. He now returns in Lock N' Load, an hour-long weekly series featuring the engineering and development of military weapons. The focus of Lock N' Load is firepower — and lots of it.
Get hands-on with some of the world s fiercest firearms as Gunnery Sergeant, drill instructor, Vietnam veteran, actor and former Mail Call host R. Lee Ermey demonstrates the weapons that made battlefield history, from machine guns and tanks, to pistols and rockets.
Get an unprecedented look at the inner workings of a particular weapon in each episode of Lock N Load with R. Lee Ermey, how it works and what really happens at the point of impact. Special high-speed photography and advanced 3D graphics help to detail the improvements, changes in technology and thinking behind each weapon, providing a deep understanding of the how the weapon has evolved throughout history, from its humble, often cumbersome and even awkward beginnings, to its sheer power and precision today. It s an enthralling ride through the evolution, origins, innovations, victories and defeats of weapons, as Ermey delivers the story with, literally, one finger on the trigger.

Produced by Beyond Entertainment For History

Part 1: Artillery
Vietnam War veteran and actor R. Lee Ermey "The Gunny" shows us the dynamics of field artillery. He covers how artillery evolved throughout the years from the Three Pound Gun of the American Revolutionary War, to a new prototype computer-controlled cannon that can simultaneously fire multiple shells at targets up to 25 miles away. Lee Ermey gets to exercise his trigger finger by demonstrating how each one works. Prepare to lock 'n' load!


Part 2: Machine Guns
In this episode of "Lock N' Load with R Lee Ermey" Gunny examines one of the deadliest weapons on the modern battlefield; the machine gun. He shows us the rapid fire destruction the machine gun has unleashed throughout history, starting with the hand-cranked Gatling Gun, to the rapid-fire, electrically powered Minigun. Prepare to lock 'n' load!


Part 3: Tanks
In this episode, R. Lee Ermey takes the viewer through the history of American tanks and tank destroyers from the World War I design donated by France to the M1 Abrams in service today. Of course he provides his own special spin (and language) as he demonstrates the maneuverability and firepower of each model.


Part 4: Pistols
R. Lee Ermey takes us through the evolution of the pistol from the flintlock dueling pistols to the rapid fire automatic pistols used today. Gunny gets up close and personal because in this episode he follows the development of the pistol starting with the muzzle loaders in 1500. And for some of these guns, like the duck foot pistol, you've got to get in close because the range in only 10 feet and Gunny's not that great a shot anyway.


Part 5: Helicopters
Gunny climbs on board one of the premier aerial weapons platforms and takes a ride through history on the Helicopter - from its early days in Vietnam as an unarmed troop transport to its modern status as a high tech dealer of destruction. The helicopter of today has come a long way from it's days in the Korean War and R. Lee Ermey shows how the helicopter has changed for the better through the years and visits an old friend of his, the Bell Huey helicopter from his days in Vietnam.


Part 6: Armored Vehicles
Gunny explores the history of armored vehicles–the steel plated, multi tasking vehicles designed to do everything from carry troops to field reconnaissance to bringing their own brand of firepower to the battlefield. He spends a lot of time riding shotgun, or rather machine gun, in armored cars and fighting vehicles built between World War Two and today at the expense of a car or two. He also does some off roading in M8 Greyhound, a German 251 half track, an M-901, a Bradley Fighting Vehicle, even a brand new Stryker and the high-tech MRAPS, designed to protect our troops from IED's and roadside bombs.


Part 7: Shotguns
Gunny explores the history of shotguns – from a 17th century Blunderbuss to the modern day, gas-assisted M4 Super 90. Starting with the blunderbuss Gunny tries out the great shotguns throughout history that are perfect for his favorite sport; hunting. Along the way, he "rides shotgun" on a stage coach as he tests a Wells Fargo Coach Gun; fires the groundbreaking shotguns of legendary gun designer John Browning; tests his skeet shooting skills against Olympic Gold medalist markswoman Kim Rhode; and heads to Camp Pendleton to check out the Marines' state-of-the-art shotguns.


Part 8: Rockets
Gunny gets a first-hand look at the "rocket's red glare" as he demonstrates rockets dating back to ancient China thru today's state of the art self guiding missiles. Hitting a target with a rocket is tough as Gunny finds out trying to hit a target with a replica of an ancient Chinese rocket. He has better luck and more fun with a Korean hwacha then finally gets his accuracy down with a Swedish AT4. But it's the MLRS that really gets him excited. Weapons include: the ancient Korean Hwacha–a rocket powered weapon designed to launch a volley of deadly arrows; The Congreve–the rocket that inspired the Star Spangled Banner; the TOW–one of the first "guided" rockets, and today's state-of-the-art Javelin.


Part 9: Blades
Gunny explores the history of the weapons that ruled the world for thousands of years before guns came. Gunny provides a crash course on the different types of blade weapons: arrows, spears and swords. Featured weapons include: English Long Bow vs. Medieval Crossbow–Gunny tests out the armor piercing power of these legendary weapons; the Roman Pilum–Gunny tests out the Roman throwing spear that helped create an empire, and explores its surprising and revolutionary design; the Lance–Gunny trains on the cavalry spear that roamed the battlefields from Medieval times all the way to WWI; and Gunny gives us a detailed exploration of the tech and design behind swords from ancient Bronze to the Japanese Samurai sword to today's modern day bayonet, still being used by military around the world.


Part 10: Ammo
If you're still talking about bullets, pay attention and Gunny will get you primed right. He provides a history lesson in the development of the modern round of ammunition with extensive demonstrations. You might never have thought about it, but every gun, rifle and pistol–no matter how well engineered, is useless without well-made, effective ammunition. Go on a journey through history with R. Lee Ermey to see the technology behind the very first round of ammunition. Then hit every important engineering development until Gunny fires the latest and greatest bullet ever designed–the high-explosive, armor piercing .50 calibre round. Just wait till you see this round blow up an entire fuel dump! Ultra-slow motion footage will let you see just how a round of ammunition travels through the air and why ammunition is so destructive when it hits a target. Three-dimensional graphics will also take you inside the technology, as we open up and journey inside the ammunition and the weapons that fire them.


Part 11: Rifle
It is the most personal yet ubiquitous weapon of all time. It has evolved from a crude ballistic pipe to a fifteen-rounds-per-second jet of bullets. It is the rifle–and R. Lee Ermey is taking a second shot at this battlefield boomstick! Gunny tries out the rifles of various eras that faced each other in battle to discover the advantages and disadvantages of each. With each pair Gunny explains the improvements that made the new rifles superior to previous weapons. R. Lee Ermey gets hands-on with America's most proven and famous firearms–like the M1 Garand, 1853 Enfield and the 1903 Springfield. Plus, advanced 3D graphics take us deep inside the workings of rifles. Gunny also tests which rifles were the greatest through history, comparing weapons like the American M16 and Soviet AK-47…in a cold war shoot out! You will also meet the experts, engineers and warriors who use these weapons, as Gunny crosses America to show you the engineering evolution that lead to today's rifle.


Part 12: MG2
When today's warriors go toe-to-toe in combat the weapon they rely on is the machine gun. From the crude machines of the 19th century to the slick weapons of today, Gunny takes us on a journey that looks at the engineering development of this rapid-fire battle winner. Learn how the "potato digger" machine gun got it's name, and why a hand held gun developed in 1965 is still the weapon of choice for the toughest warriors on the planet. Ermey compares the machine guns that stormed the beaches of D-Day–the Bren gun and the B.A.R.–with a classic shooting match. Then, Gunny cuts loose with the Special Forces wonder weapon, the MP-5, as used by the British SAS and American Navy Seals. Not only will you see these weapons in action, but with cutting-edge 3D GFX you will go inside the weapons–to see close up and personal the mechanism, operation and evolution of the machine gun.


Part 13: Bunker Busters
In days of old, if your army had to take on a huge stone castles there was only one option: bunker busting siege weapons like the giant crossbow known as the Ballista and the fearsome Trebuchet! These weapons hurled rocks and flaming kegs to cause mayhem and smash through walls. Today the siege tradition continues, with our military using high-explosives to blow the bad guys out of their foxholes. First, Gunny let's loose massive boulders from an ancient trebuchet catapult against an enemy castle. Then he gets his hands on some old-style gunpowder and recreates the big bangs that were used to bring down enemy bunkers, all the time instructed by committed experts who revel in the history of these amazing weapons. Gunny also visits today's bunker busters–military engineers who bust under, over, and into enemy strongholds. 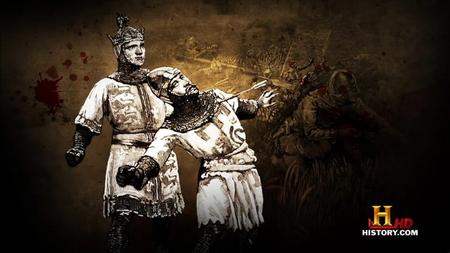 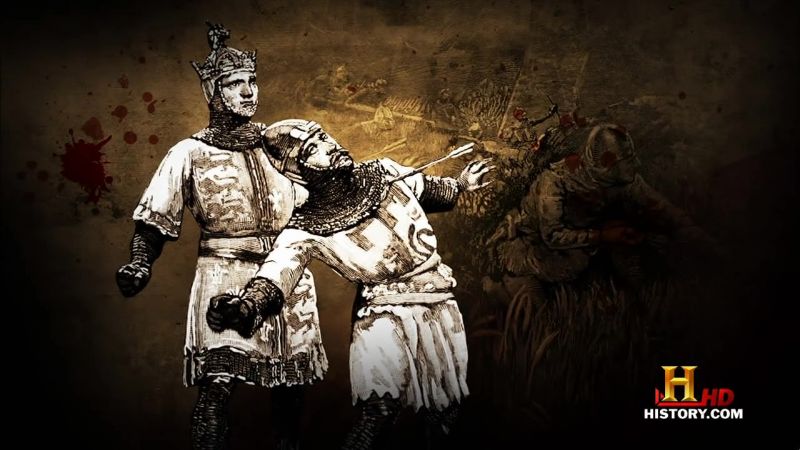 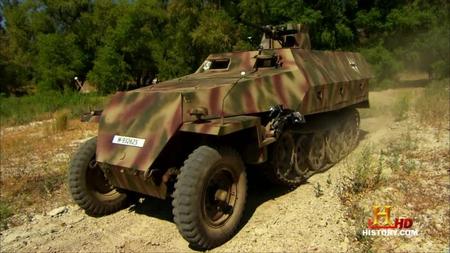 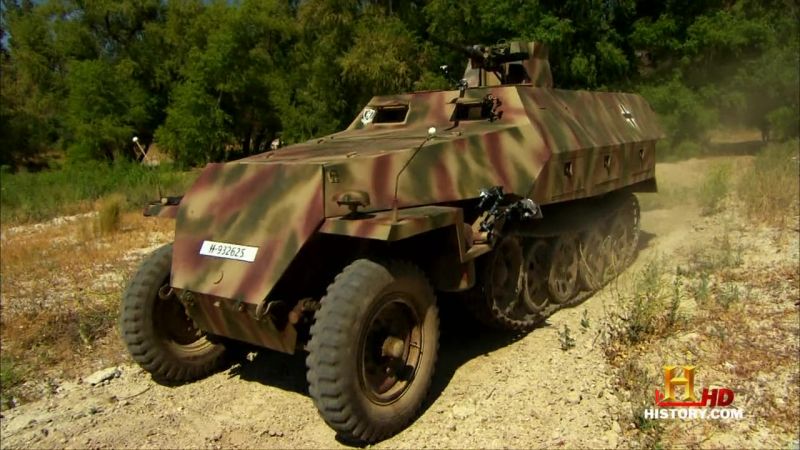