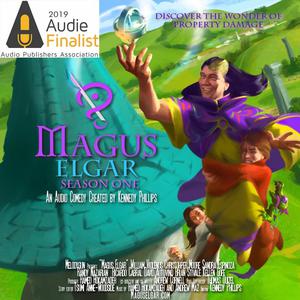 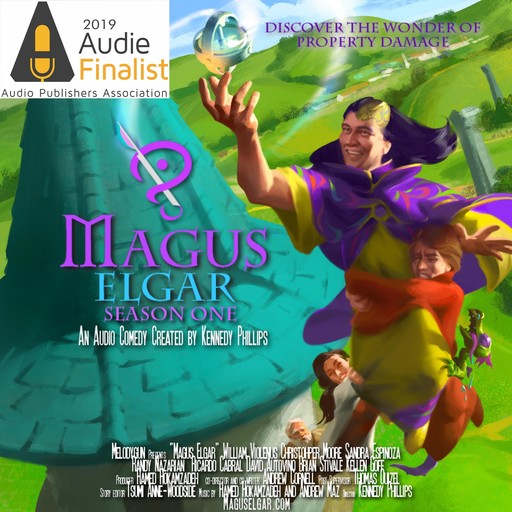 Magus Elgar is an 11 Episode Audio Drama with a full cast of over 10 characters.Nominated "Best Original Work" Audie Awards 2019.Within the Multiverse sits a fantastic magical realm. This is the world of Magus Elgar. Within the Multiverse sits a fantastic magical realm. A place we call Hearth. This is the world of Magus Elgar. Magus Thaddelor Elgar is a magical trailblazer, investigating anomalies and experimenting with the most dangerous of spells. It's a shame his apprentice Udo Malaaki is more worried about silly teenager things like 'not dying' and 'keeping his limbs intact.' Kids today. So when Magus Elgar discovers a Mirror Cauldron, he flails caution in the wind, and casts a spell that sends he and his ward hurtling towards a horrifying world beyond their comprehension: A world of science! As a result, scientific tools and toys have found their way into Hearth and have taken on strange magical properties. Scientific Tools Augmented with Magical Power, or S.T.A.M.P.s for short! Aided by the Quantum Scientist Dr. Graw Horatio and his assistant Ms. Kaylee Fawn, they form the Magical Anomaly Interdimensional Locators (MAIL for short) to hunt them down before reality is ripped apart, or worse, someone realizes Elgar is to blame. Will they recover them before we're all cursed to the Unblinking? Not if disgruntled Ministers, Breaded Nugget Velociraptors, and Pun-frothing Mathemagicians have anything to say about it!-5 1/2 Hours of Audio!-Theatrical quality Sound Design by industry professionals-Fully scored and Voiced-A Fourth thing that's more compelling that the previous three combined!