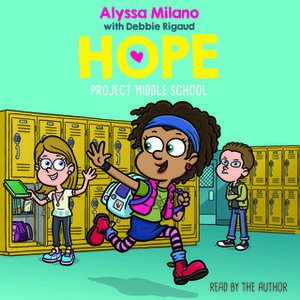 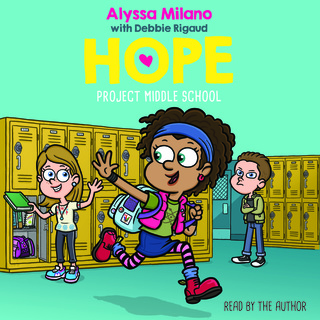 Lifelong actor/advocate Alyssa Milano tells the story of a young activist in the making. It's the first book in an empowering and funny new middle-grade series illustrated by Simpsons' illustrator, Eric S. Keyes.

Meet Hope Roberts. She's eleven years old, and she wants to be an astrophysicist. She loves swimming, Galaxy Girl comic books, and her two rescue dogs.

Hope believes it's always a good day to champion a cause, defend an underdog, and save the future. And most of all, she believes in dreaming big. That's why she's enrolled in all of the advanced classes at her new middle school. She's smart and confident in her abilities. But though Hope seems super strong on the outside, there's another side of her, too. She's just a regular girl trying to survive middle school.

This first book starts with the beginning of sixth grade, and Hope's BFF Sam made some new friends over the summer. Hope doesn't know how to handle it. She and Sam have always been inseparable! Then Hope meets her new lab partner, Camila, and they get off on the wrong foot. And even though Camila is great at science, she doesn't want to join the science club. The club is
all boys, and she doesn't feel welcome.

When Hope hears that, she's determined to recruit more girls into the science club, including Camila. Hope knows that sometimes changing the world starts small. So now Hope has a mission! Can she turn the science club into a place that's welcoming for everyone - and make some new friends along the way?

Hope's relatability, kindness, empathy, and can-do attitude will inspire a generation of do-gooders. This new series is a response to the very palpable feeling that not only can young people save the world - they will!