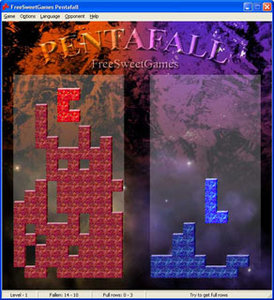 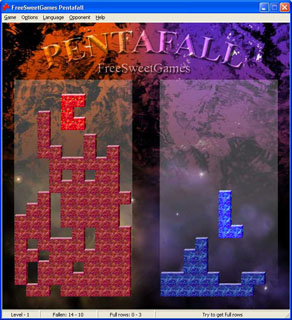 Shapes composed of five square identical blocks each fall down the playing area. The object of the game is to manipulate these shapes, by moving each one sideways and rotating it by 90 degree units, with the aim of creating a horizontal line of blocks without gaps. When such a line is created, it disappears from the player's area and adds to the opponent's area. The blocks above disappearing line fall. As the game progresses, the shapes fall faster, and the game ends when the player 'tops out', that is, when the stack of blocks reaches the top of the playing area. There are two modes in the game: Duel - identical shapes fall to you and the opponent; Alone - the full rows appear to the opponent's area. You can increase a variety of falling shapes, checking the additional sets: complex five-block shapes, all four-block shapes.