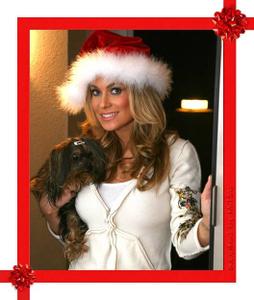 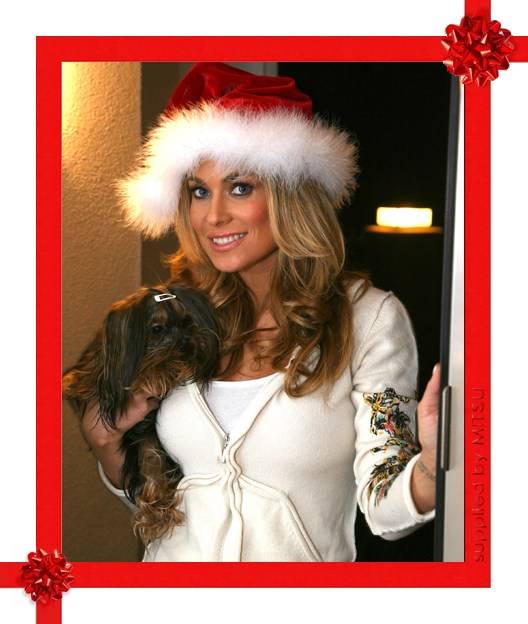 Carmen Electra - Christmas Photoshoot
6 JPG | UHQ (1800x2700) | 4 MB
CARMEN ELECTRA
Birth Date: April 20, 1972.
Place of Birth: Ohio, USA.
Biography: Nee Tara Leigh Patrick, Carmen Electra was born on April 20th, 1972 in White Oak, Ohio. Electra's talents were evident when she was a child, as she attended the School for Creative and Performing Arts at only 9 years old.
In school, Carmen began taking singing lessons and practicing her vocal talents. By the time she was a teenager, she was performing in musicals (as a dancer) and doing her own choreographies. Her ultimate ambition was to go to Los Angeles and sign a record deal. And by the tender age of only 15, Carmen was on her way to realizing her dream.

Electra decided to relocate to Minneapolis, where she resided with her sister and made a living as a model for Target department stores. After four years, the aspiring star moved to Los Angeles and only one week later ran into musical genius Prince, who decided that she should change her name to Carmen Electra.
Prince liked Carmen's look and style, and he signed her on to his label, Paisley Park Records, in 1992. Unfortunately, despite all of Prince's efforts in helping Carmen by promoting her and her new album, her music career failed miserably.
Her single "Go-Go Dancer" hardly got any airtime on MTV, and when the single hit store shelves in 1992, it didn't sell well at all.
Perhaps Electra's most noted move was posing for Hugh Hefner's magazine in 1996. The following year, Electra was chosen as the next host of MTV's Singled Out, as a replacement for Jenny McCarthy. Although the deal was for 65 episodes, Carmen was not as popular Jenny and the show eventually fizzled. But she did get another chance as the host of Loveline, also on MTV.
But bigger things lay ahead for Electra – namely, the role of Lani McKenzie on Baywatch Hawaii, in the 1997 and 1998 seasons (in the post-Pamela Anderson days).
Since then, Carmen's fame has only gone uphill. She was featured in a comic book, was the national spokesperson for Budweiser, and appeared in the 2000 sleeper comedy hit of the year, Scary Movie.

And Carmen's relationship with Dennis Rodman certainly didn't hurt her publicity. The two tied the knot in 1998 and separated only nine days later – with Rodman claiming that he wasn't in the right state of mind at the time. The marriage was eventually annulled.
With a failed marriage behind her, Carmen Electra found her niche by taking on small film roles. In 2001, Carmen Electra appeared in Get Over It, Perfume and Sol Goode, and the following year, she was featured in Whacked! and Rent Control. In 2002, she also became a ringside reporter for Comedy Central's BattleBots and the host of Livin' Large.

Electra's film career remained somewhat prolific in 2003, with appearances in the made-for-TV movie Baywatch: Hawaiian Wedding and the feature films Uptown Girls and My Boss's Daughter. To the delight of men everywhere, Electra launched the self-explanatory DVD workout series, Carmen Electra's Aerobic Striptease. After all, she has surely been getting quite a workout as a featured performer in the Pussycat Dolls show.

When MTV learned that Carmen was going to marry her long-time beau, Jane's Addiction guitarist Dave Navarro, they decided to give the pair the Jessica Simpson and Nick Lachey treatment. As a result, the network launched 'Til Death Do Us Part: Carmen & Dave, a reality show about the months of planning leading up to the couple's November 2003 wedding. The show debuted in January 2004.
Carmen is still keeping busy with film work: in 2004 she appeared in the Ben Stiller and Owen Wilson comedy, Starsky & Hutch, and lent her voice to the animated comedy, Lil' Pimp. She can also add 2005's Getting Played, with Vivica A. Fox and Stacey Dash, to her filmography.