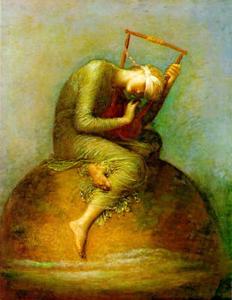 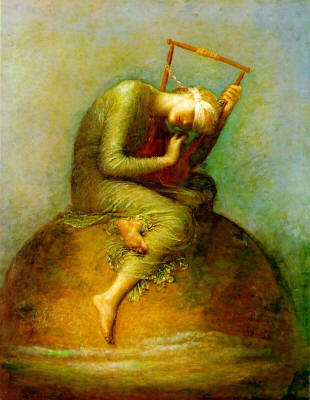 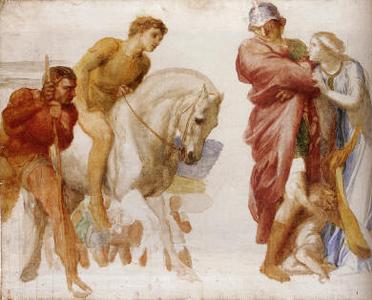 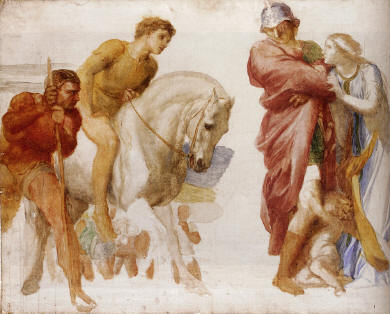 One of the most singular, and enigmatic figures in Victorian art, and perhaps the hardest to pigeon-hole, or classify in any way. He was born in London, the son of an ordinary family. Watts was serious-minded, lacked a sense of humour, and was politically a radical-on two occasions he refused a baronetcy. He was very sympathetic towards the dreadful living conditions of the urban poor. Watts regarded, as a great evil, the upper classes of the country taking vast sums of money they had not earned. He produced many allegorical pictures throughout his long life, and they vary greatly in their level of success. He also produced, at his own expense his “Hall of Fame,” pictures. Watts was really at his best as a portraitist. [ But his best portraits still could never inspire the way his finest theme paintings did, and continue to do, such as Hope. - Ed ] The likenesses of his portraits are excellent, and in many of them he really brought out the character of the sitter. They are, however, all painted in dark, muted colours, and collectively give a very sombre impression. There is an excellent display of them at Bodelwyddan Castle in North Wales, an outpost of the National Portrait Gallery.

In middle age, the serious minded and already aged painter, made a short lived and totally disastrous marriage to the teenaged Ellen Terry the great actress.

Relatively late in life Watts took up sculpture, and produced a relatively small number of outstanding works. These include the Clytie, Physical Energy, and the magisterial memorial statue of Tennyson [PIC], now placed outside Lincoln Cathedral. This highly original, rough hewn, and vast statue was created by the artist in extreme old age, a tribute to his vision, capacity for hard work, and indomitable character.

Watts married Mary Fraser-Tytler in 1886. She was thirty six years his junior, and devoted the rest of her life to the care of her genius, materially during his lifetime, and his reputation after his death. Mary Watts had the misfortune to live until 1938, when her geniuses reputation seemed in terminal decline. In 1891 Watts had a new house called Limnerslease (satirised as Dauber's Den by Burne-Jones), built at Compton near Guildford. Nearby in 1903-1904 the Watts Museum was built. It is well worth a visit, and will be featured on this site before long. Close to the Museum is The Watts Mortuary Chapel at Compton. This remarkable building was the work of Mary Watts, assisted by local villagers. It was built entirely to Mary Watts designs. George Frederic Watts is buried close to the chapel.