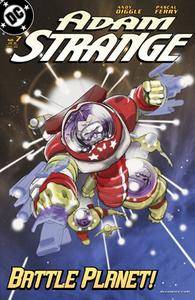 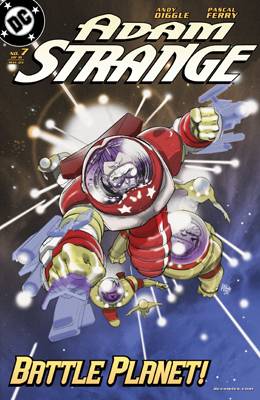 It's all-out battle as Adam is joined by intergalactic lawmen the Darkstars to discover what happened to the planet Rann...a mystery that may lead to a new Rann/Thanagar war! Adam apparently has had 20 hours of sleep. Alanna suggests that he’s tired from the sex with her from the night before. Aleea then runs into the room and Sardath is on the computer. Adam says that he can ignore Sardath because he is no longer the protector of Rann. He is a father and husband. Elsewhere on Rann, Tigorr and Vril Dox are in the same room. Sardath enters with Adam and Alanna. Sardath starts explaining. On Thanagar, someone called Luciphage was to bring the end to planets. On Rann, he was called Starbreaker. However, the Justice League stopped him. He continues and tells how Sh'ri Valkyr wanted the Omega Beam. Because the process of transporting planets and such would turn them into energy, rather than teleporting them to another destination, she would teleport them into Starbreaker himself. The two aliens sent to kill Adam were originally meant to steal the Omega Beam but stole the Zeta Beam instead. Sardath could uninvent the Omega Beam and he knew that Rann nor Adam could withstand Starbreaker. Sardath then thought up a plan. He teleported Rann far away from all of this. Then, a second Omega Beam would transport a star about to go supernova into Rann’s position to show that it eradicated Rann. The Omega Beam would later self-destruct, destroying any evidence. Vril Dox, angry, storms off. Sardath apologises for not telling Adam his plan, but he was afraid that others might be watching. Then Adam learns the truth: the Sh’ri Valkyr must be tracking him. Just then, Valkyr ships transport to the dead universe in Rann is located. Starbreaker makes his way off the ship and consumes one of Rann’s suns. On Rann, a security alarm goes off and Dox is at the Omega Beam’s controls and he teleports himself somewhere else. Rann’s main sun begins to dim and Sardath realises that Starbreaker is here, sucking up the energy. He states that Starbreaker will turn Rann into a freezing cold planet if he gets through the suns and to the planet itself. Adam wants Sardath to transport Rann back to its original position but Sardath states that Adam needs to destroy the Valkyr’s Zeta Beam or they will simply follow them. Adam then says goodbye to Alanna and brings along some Rannians and Tigorr, who wear the combat suits that Adam is wearing. As they disembark their own ship, the Thanagarians are already disembarking from their own ships. Inside, Alanna is forced to help Sardath because he does not want her helping Adam – it is too dangerous. Besides, he needs help recalculating the Omega Beam calculations. Then, Valkyr teleports in and greets Alanna by her name. They obviously have known each other.