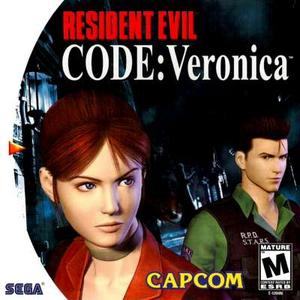 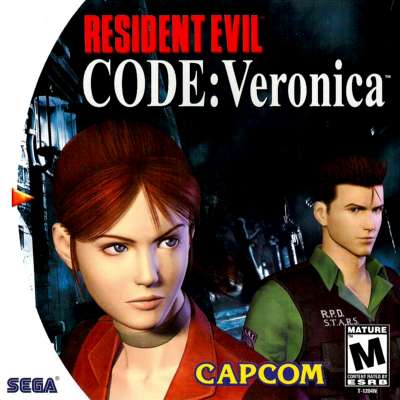 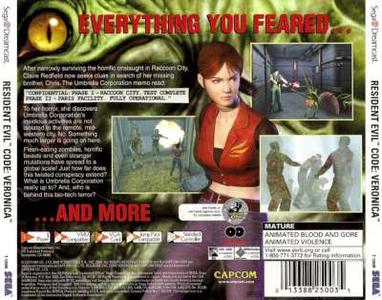 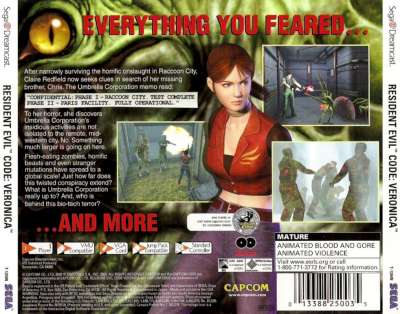 "CONFIDENTIAL:
Phase I – Raccoon City. Test complete.
Phase II – Paris Facility. Fully operational."
To her horror, she discovers Umbrella Corporation's insidious activities are not isolated to the remote, mid-western city. No. Something much larger is going on here. Flesh-eating Zombies,
horrific beasts and even stranger mutations of science have spread to a global scale! Just how far does this twisted conspiracy extend? What is Umbrella Corporation really up to? And, who is behind this bio-tech terror? Alone and terrified, Claire now discovers her terrifying ordeal is far from over. The nightmare is just beginning.

- 1 person action/adventure.
- Drop-dead gorgeous graphics brought to you by Sega Dreamcast.
- Duel gun system that allows you to mow down mobs of zombies.
- 180 degree turn found in RE3 and Dino Crisis is included in this
adventure, giving player more control when confronted by beasts.
- Engrossing storyline reveals more about the "Umbrella" and the
Zombies.
- Spans 2 completely different locations.
- New enemies to conquer.

If You Have Dreamcast Console:
Burn Images into Balnk CD-R and Load Game With Boot Disk 1.2.