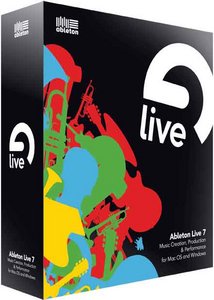 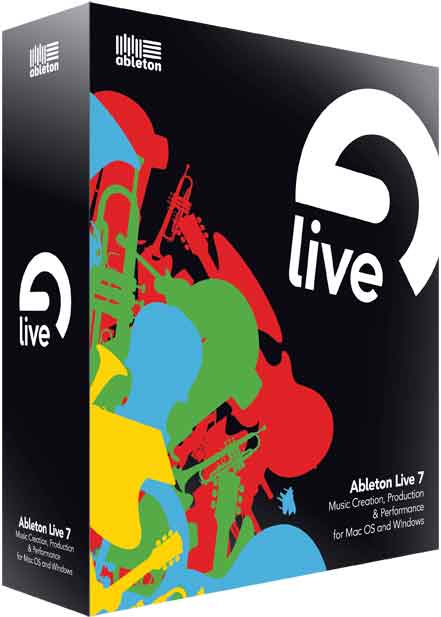 Ableton Live v7.0.14 Portable | 96,9 Mb
Ableton Live is an audio sequencer that you can play like an instrument. On its own or with other musicians or DJs, live on stage, or when remixing in the studio all you need is Live and a Mac or PC. Ableton Live is the revolutionary music production solution that allows you to spontaneously compose, record, remix, improvise and edit your musical ideas in a seamless audio/MIDI environment. Live brings your acoustic, electronic and virtual instruments as well as your digital audio recordings and MIDI sequences, together in a single interface with unparalleled ease of use. In short, Live lets you focus on what really matters: your music.

Live's award-winning elastic audio sequencing lets you record, import, arrange and process multiple audio clips and loops into complete songs regardless of their pitch or tempo?®all in real time while the music continues. You can even change tempo and pitch of audio independently after the fact and clip envelopes create endless loop variations. Of course, you can also integrate linear tape-style recording along with your loops. With Live, Ableton's unique approach to music production extends to a new paradigm in MIDI sequencing and manipulation as well, complete with virtual instruments. As simple to use as it is powerful, Live is a completely unique musical tool that blurs the distinction between stage and studio.

Ableton develops modern software technology to inspire creative people. Since the company started in 1999, more than forty-five developers and business professionals have joined Ableton??many of them active musicians or DJs. The company has received outstanding press, awards and customer feedback since the unveiling of Live in October 2001.

Ableton Live is the only solution designed for each stage of the musical process, from creation to production to performance. In the creative stage, Live is transparent, intuitive and responsive, capturing inspiration and encouraging the flow of musical ideas. During production, Live provides all of the professional tools and studio compatibility required to complete and perfect projects. On stage, Live delivers the expressive control and stability that innumerable performing artists have come to rely on. Live 6??Music Creation, Production, and Performance for Mac OS and Windows. Create. Produce. Perform.

* From Sketch to Composition. Live's specialty is composition by improvisation. Record musical ideas, combine or create new songs, and compose on the fly. Live captures your every move for later refinement and editing.
* The Musical Hub. Come together, right now. Live offers complete multitrack recording and editing for any acoustic source, hardware synthesizer or software instrument.
* Easy MIDI. Yes, MIDI can be fun and easy. Drop a software instrument in a track and play. Drag and drop MIDI and audio effects, layer synths, and record MIDI as audio.
* Pattern Mode. Your laptop is about to turn into a groove box. Live puts an arsenal of groove-making tools at your fingertips.
* Mix and Remix. Instantly combine jazz with house with hip hop with soul… Live synchronizes it all in real time. This year, 58 international magazines voted Live as the best DJ tool on the market. Details…
* On-the-Spot Sound Design. Perform real-time sonic surgery on your sounds. Draw melodies, rhythms and effects changes onto loops and samples while they play.
* Hands-on Control. Liberate yourself from the mouse. Play your sequencer like an instrument on stage or in the studio.

Live 7 Brings the Most Requested Features
• Time Signature ChangesLive 7 allows the use of multiple time signatures within a single Live Set in the Arrangement View timeline and Session View scenes.
• Video ExportVideo that has been edited or warped in Live can be exported to a new file.
• Easier AutomationMultiple automation lanes per track can be displayed and edited at the same time.
• Tempo NudgeA new "tempo nudge" function makes it easier to synchronize to live musicians or DJs.
• REX SupportREX files can be dragged, dropped and played just like WAV or AIFF files.
• Many Other Important ImprovementsLive, Operator and Sampler have received many important improvements and additions based on user requests.

Introducing the New Drum Rack
The new "Drum Rack" streamlines beat production via an easy drag-and-drop interface and brings endless creative possibilities.
• Easy InterfaceA familiar drum pad interface allows dragging and dropping of samples, instruments and effects. Each pad has its own device chain and can be shown as a mixer channel in the Session View. Each Drum Rack also has its own sends, returns and sub-mixes.
• Slice and DiceThe slicing feature fills a Drum Rack with the individual hits from REX or audio loops. The original sequence is represented as a MIDI clip, making it easy to replace, reshuffle or re-record the events and process them individually.

Improvements:
Updated Manual
On Mac OS X, changing the audio buffer size requires you to click on an
'Apply' button to commit the new buffer size. This should avoid
Audio Uinit plug-in are re-created more than once when changing the
buffer size.

Bug fixes:
Deleting or moving a Rack chain while there are clip envelopes for one
of the chain mixer's parameters (volume, pan, or sends) could crash Live.
MIDI overdub during Arranger recording could delete or cut notes.
Selecting a scene would display ôInsert Scene? for the ôSelect All?
menu entry.
Under very rare conditions and only with a Live set having at least 48
tracks, certain routings could switch to 'None' after previewing a Live
clip or MIDI file.
Replacing an instrument inside a Rack with a track having additional
automation lanes controlling parameters of the previous instrument would
crash Live.
Dragging a clip from within Live or from the Browser would not use the
Default preset.
When running Live as ReWire master with Propellerheads Reason as ReWire
slave, under certain conditions Live would crash when switching presets
in Reason in a way that would modify or change its MIDI targets.