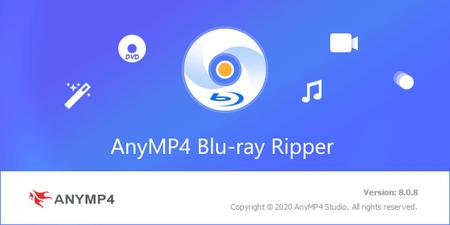 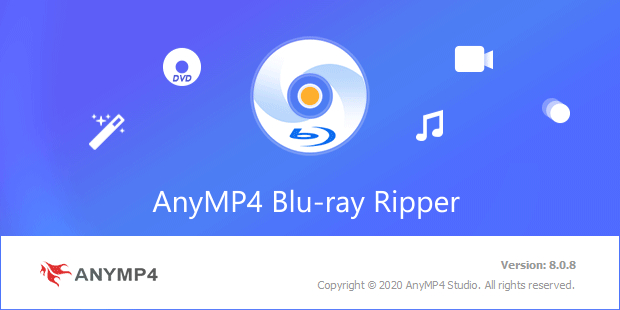 AnyMP4 Blu-ray Ripper 8.0.53 (x64) Multilingual | 76 Mb
Blu-ray disc has the large storage to allow us to store high-definition movie, movie menus, graphics and special features. Thus, Blu-ray movie is much more popular than ever, and we prefer to watch Blu-ray movie stay at home rather than go to cinema and save time.

To save Blu-ray disc on the local hard disk or other portable device and to look comfortable, AnyMP4 Blu-ray Ripper offers a simple solution. The software is a multifunctional Blu-ray Converter, and can convert Blu-ray to various video and audio formats, such as MP4, AVI, WMV, MKV, FLV, and SWF as well as rip Blu-ray to 4K/1080p videos. The Blu-ray Ripper offers perfect sound and picture quality.

Rip Blu-ray movie for playback on digital device
If you want to watch your Blu-ray movies on your smartphone or tablet, the Blu-ray Ripper can help you. The software has many predefined profiles for popular digital devices such as iPhone (iPhone X/8/7/6s/6/SE), iPad (iPad Pro/Air/mini 4), iPod touch, Samsung Galaxy Tab, Surface, Google Nexus, HTC, Nokia Lumia, Motorola, Xbox 360, Wii, PS3, PSP, and more. This software allows you to conveniently rip your Blu-ray movies for the desired device, and then watch them wuth high quality.

Edit video and enhance video quality before ripping
Before conversion, the Blu-ray Ripper provides that some parameters can be set for the selected video format. The video resolution, video bitrate, framerate, video encoder, audio channels, sample rate, audio encoder and audio bitrate can be customized to your requirements. And it helps you crop video frame to remove the black edges; adjust the video effect like Brightness, Saturation, Contrast, and Hue; add text/image watermark to the video; and rotate video position. Also adjusting the audio volume is available in editing window. And you can clip one or more segments from a Blu-ray movie.

Easy to use Blu-ray Ripping and intuitive interface
With the advanced acceleration technology, the software offers you faster speed than other Blu-ray ripper software. With the unique design and intuitive interface, you can finish all the ripping processes only in a few clicks. And it supports the upgrade automically, once connected to the Internet, the software will automatically detect if there are new upgrades available. Moreover, adopting the newest accelerating technology, AMD APP and NVIDIA® CUDA™ acceleration, this Blu-ray Ripper would provide 6x faster speed than before.