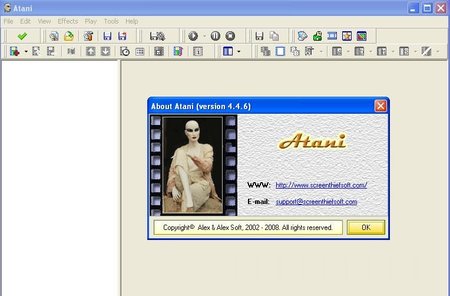 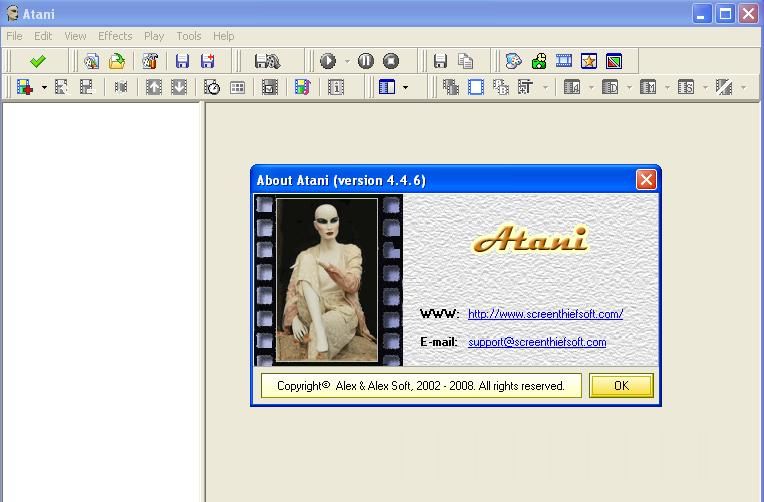 Atani 4.5.4 | 1,2 Mb
Atani - fast and effective creation animated GIF and AVI by a principle all in one. The editor of shots is built in. There is a possibility to scale the image, to adjust all parametres of a shot, to optimise a colour palette, to regulate a transparency, to add a running line, and also to grasp screen animation and to keep separate shots from AVI. Formats BMP, JPG, GIF, PNG, ICO are supported… The Interface multilingual

Programs allows to solve following problems: - To create animated GIF (banners) - to edit animated GIF (banners) - to create AVI files - to edit and create shots by means of built in graphic - the editor - to look through and keep separate shots AVI of files - to convert AVI a file or its separate shots in animated GIF - to change the codec for AVI a file - to change the size of a shot for AVI a file - periodically to grasp, defined by the user, a part of the screen and to create on the basis of it animated GIF or AVI a file - at creation AVI of a file, to choose codec type, thereby supervising the size/quality of the future file - to add a sound in AVI a file each step of creation of the above-named files is under a complete control of the user - use of a file of the project (with expansion mcp), allows to come back to creation of an animated file from any step subsequently - expansion of a file of the project is registered in system, That allows to start any project in the standard image (double or ordinary click of the mouse on a file) - for formation of shots following file formats are supported: BMP, JPG, PNG, ICO, GIF, animated GIF, EMF, WMF - for addition or an insert of shots it is supported технолигия "drag and drop" ("drag and release") - any shot in the project can be removed, moved, optimised on colours, to change by means of the built in effects - group processing of shots is supported - having constructed the project for creation AVI of a file, it is easy to pass to use of the given project for creation animated GIF practically at any stage - any shot of the project to keep in a file (with adjustment and a preview) or to copy in the exchange buffer - to test future a file as at a development cycle, and right after creations (the player established in system and the Internet a browser) - is easy to add with any text - to generate a set of shots with a semitransparency are for this purpose used a running line, simulating display or image disappearance - any shot can be transformed with the help встроеных effects the sizes, colours, The arrangement of shots, type of a created file can be changed at any development cycle - many operations are repeatedly duplicated through points of the main menu, the panel of fast access, the menus caused by the right button of a mouse - to define the size of shots of the future animated file under the first added image - to use hotkeys - to convert graphic formats.