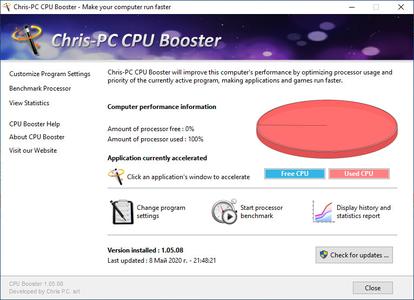 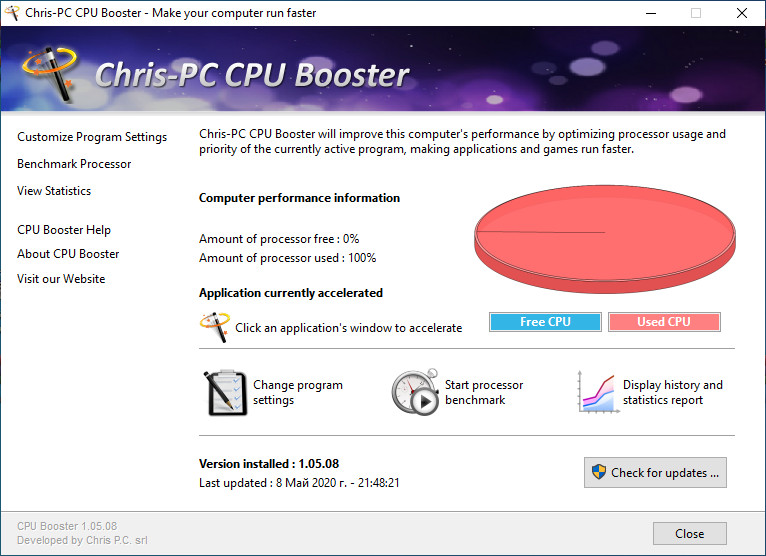 This feature allows applications to always have the most processing power available and instantly makes your computer run faster.

Chris-PC CPU Booster puts you in full control of your CPU by enabling those programs that need priority in CPU usage to perform faster and smoother against other applications that are not so demanding of the CPU.

The software will instantly instruct your CPU to give the active application higher priority and let the other non-essential software run with lower priority in the background. This will sensibly boost your computer performance and enhance your computer use experience.

Features:
Optimizes games, photo editing software, video production and any software that requires excessive processing power to run much faster than the software was originally designed for, without any hardware upgrade.
Background running: Once installed, started and configured, CPU Booster will run quietly without user interaction to boost your favorite applications.
Artificial Intelligence constantly switches the foreground application to use the least used processor core on multi-core computers, ensuring applications always have the most CPU power available to them.
Includes a processor benchmark test to get an evaluation on the stability of your computer and RAM memory.
Provides statistics for a complete overview on your computer performance while running the CPU Booster software.
Provides dynamic systray icon which displays the CPU usage in real time.
Simple and intuitive interface.