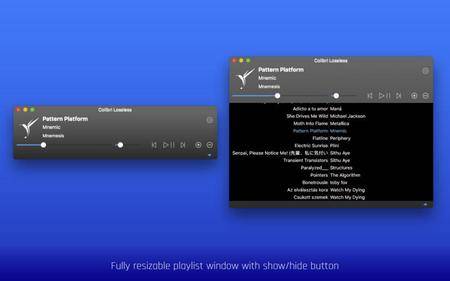 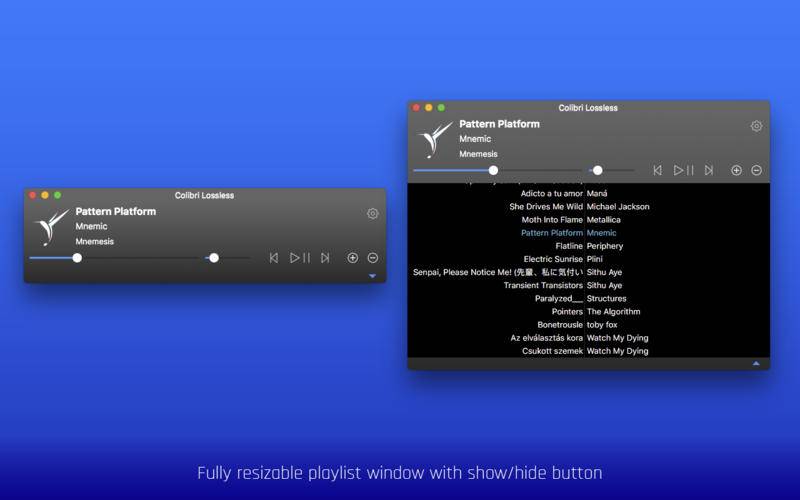 Colibri supports cristal-clear bit-perfect playback of all popular lossless and lossy audio formats, uses only a tiny amount of computing power and offers a clean and intuitive user experience.

Saves your battery - Colibri uses a barely noticable amount of computing power during the playback of your music. The application is built using state-of-the-art Swift 3 programming language, the BASS audio engine is bundled as machine code while the interface uses built-in components by Apple. This was done in order to achieve a tiny footprint and to be as native to macOS as humanly possible.

Plays your audio - Colibri is able to playback the most widely used range of file formats in terms of lossless audio: FLAC, ALAC, WAV, AIFF, APE, TTA and WavPack - along with these popular lossy formats: Ogg Vorbis, MP1/MP2/MP3 and AAC/M4A. Additional format support might be considered if requested.

Handles CUE Sheets - Colibri reads, processes - and to some extent - sanitizes cue sheets. Malformed and disordered content is reprocessed during loading and should audio files written in the sheet be missing then Colibri makes a few educated guesses on the possible file name/extension. If the sheet does not contain artist, song title or album information then Colibri tries to extract the song info from the audio file header itself.

Supports gapless playback - Colibri is extensively designed from the ground-up to provide a true gapless listening experience - with or without using a Cue Sheet.

Picks up where you left off - Colibri saves your current playlist upon quitting and re-opens your songs when you start it up again, maintaining the song data between playback sessions, regardless of having them previously loaded from CUE sheets or single files. Apple's Sandbox protection is fully supported.

Avoids most problems - Colibri does its' best to avoid most problems before, during and after playback - however there are situations where error checking and guessing indexes won't suffice. Loading unsupported files show up as an error message in the status bar and files that have disappeared since loading are automatically removed and skipped upon being reached in the playlist.

Understands your language - Colibri is capable of rendering the song information as it was intended to be shown: of all the tried metadata it had no problem with displaying cyrillic or kanji/katakana/hiragana characters mixed with ASCII.

Respects your privacy - Colibri does not phone home, collect usage data or modify files in any way. The only data it remembers are your playlist and settings: the loop mode state, whether to show the menubar and which pieces of info text to display in the status bar - nothing else!

Displays album art - Colibri displays embedded cover art for FLAC files. When that yields not results then it looks in the folder where the current song resides for a cover art image.

Resides in your Menu Bar - Colibri can place an unobtrusively small icon in the Menu Bar for easy access and playlist control: you can either start/pause the playback, skip to the next track or go back to the previous one. It also displays the info and cover art image of the current song.

Integrates with Finder - Colibri conforms all of Apple's strict requirements - which means that it shows up in Finder as an option in "Open With" when a supported file is selected. Which in turn also makes it an available as a suggested file association option.

Adjusts to your Display - Colibri's interface elements scale themselves nicely on every screen resolution and pixel density.

- Network Stream/Online Radio Support
File -> Open Network Stream (or CMD + K) enables you to insert an online radio stream URL (SHOUTcast/IceCast m3u/pls are tested to comply). Colibri is also able to show the header data sent by the station as if it were song data and also refreshes it every time buffering is done.

- Playlist Menu (Right-click or Option-clickv on a Song within the Playlist)
-> Reveal in Finder - open a Finder window with the selected songs' location
-> Delete Song(s) - use it to mass delete songs from the playlist. Mixed selecting is also possible: select multiple songs with CMD/SHIFT + left click and then right/option-clicking on any other unselected song and then select Delete from the menu, which will delete all selected songs along with the right-clicked one

- Sound Output Switcher
It is now possible to select an external sound card or USB headphone that is supported by macOS as a sound output destination. Enumaration of devices is done every time the Settings window is shown.

Misc:
- the loop mode selector in Settings has been redesigned to incorporate the random mode as well