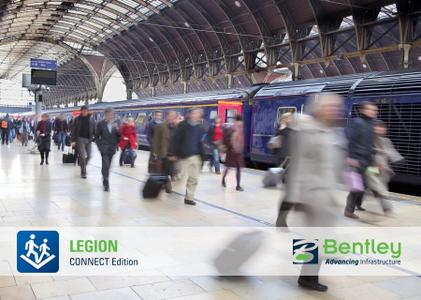 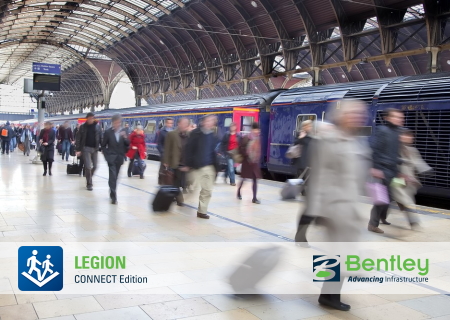 The Train Interface (PTI) is moved from [Technology Preview] to commercial release.

- Various improvements and bug fixes based on user feedback from the [Technology Preview].
- "Yellow Line" Enhancement - You can now specify the "yellow line" when drawing a Platform. Involves an extra step in the drawing command, after the option to simplify platform edge vertices. The Platform property dialog has a field for setting the distance from platform edge to yellow line.
- Edit Carriage Data - For train carriages, you can now edit Door Markings and Join Points.
- Improvements to Naming of Train Carriages - Previously, the Train Carriage name could not be set without accessing the Save to Catalog dialog, after setting the Carriage properties. In this edition of LEGION Model Builder, the Carriage parameters dialog has new data fields "Name" and "Notes (optional)".
- Train Visualization Improvements - In LEGION Simulator, accessible spaces for Trains are displayed next to their Platform when a Train has arrived, and are hidden when Trains depart.
- Platform Edge / CAD association - Platform edge is now permanently associated with one or more CAD elements.
- Note: Platforms defined in Update 1 must be redefined in Update 2, to create the permanent Platform edge/CAD element association.
- Populate alighters near the doors - A new option in Train Services. Alighting entities are usually distributed randomly throughout a Service's Carriage interiors. Checking this option populates alighting entities next to the Train doors in a Service's Carriages, producing a less impeded alighting behavior.

Capacity by Density
Delay Points and Waiting Zones can now accept a desired pedestrian density in place of capacity. For example, Fruin Level of Service C. Object capacity is then automatically calculated from that density and the object's accessible area.

A variety of modelling and analysis tools have been added, to help modelling environments where social distancing is required.

Other entity details about entities remaining a model at the end of simulation are left intentionally blank. Their journeys have not completed so final types and destinations are unknown, and reporting incomplete journey times would actinically reduce average journey times, while increasing Generalized Journey Time social costs. 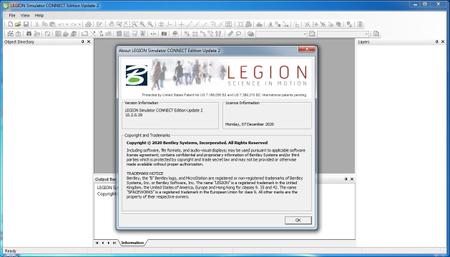 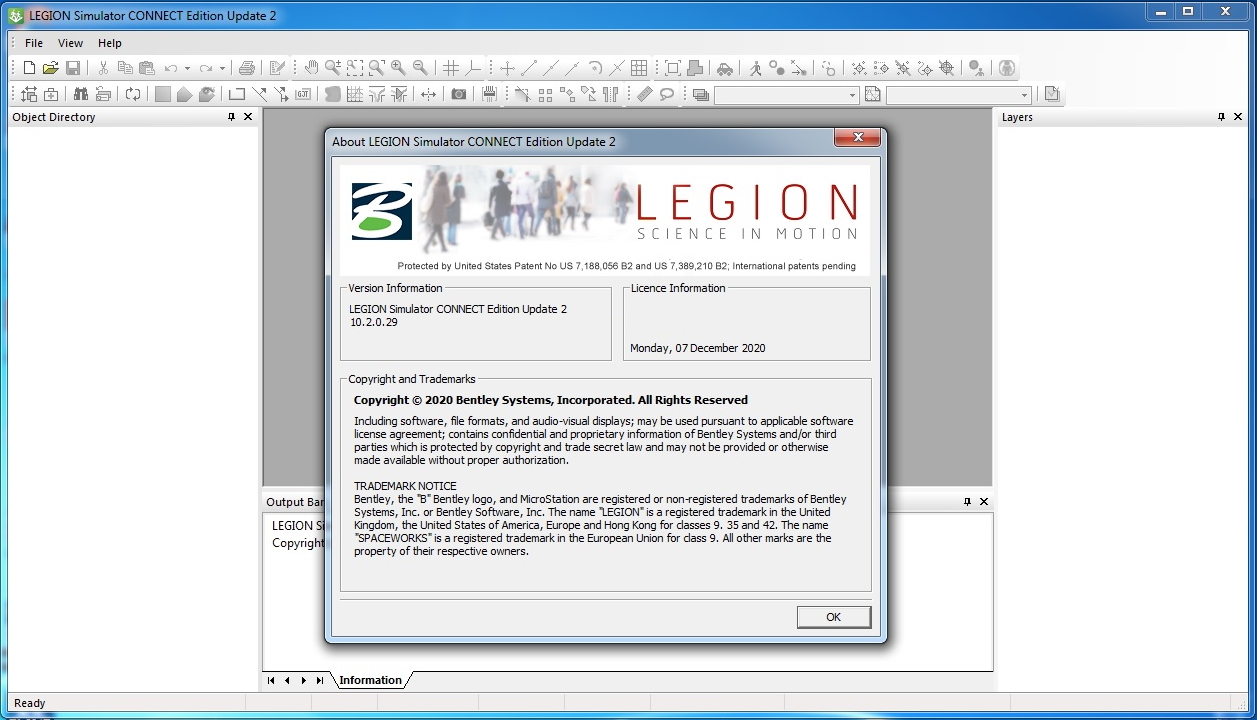 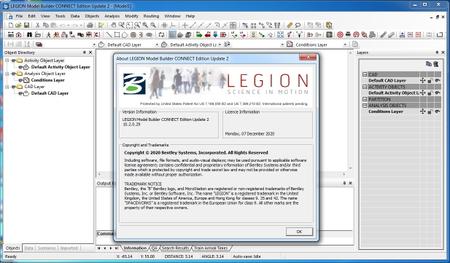 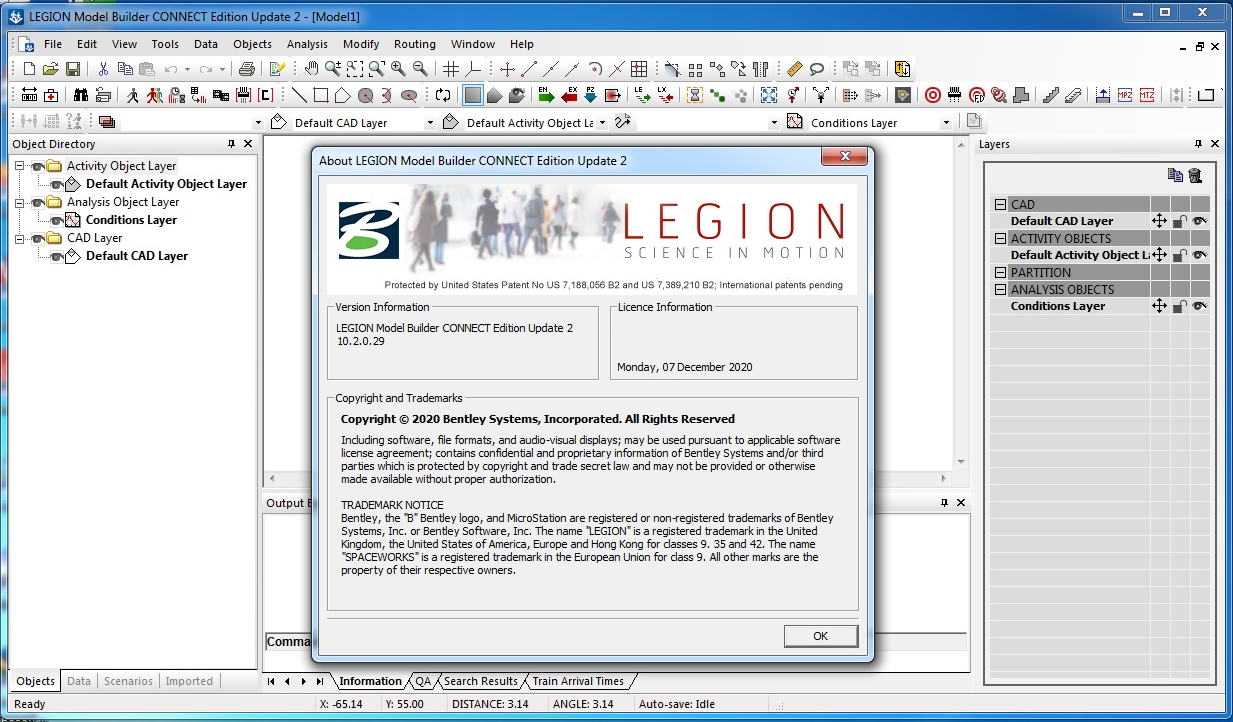 LEGION Simulator is an analytical application that reads the pedestrian scenario plan of rail and metro stations, stadiums, and other large-gathering venues. The applications help engineers and designers to easily calculate the movement of people within a space. LEGION Simulator includes the data analysis capabilities to review the result with reports, video, and heat maps
LEGION Model Builder is an application used by building designers to import CAD floor plans. The software places pedestrian control and simulation objects within the floor plan to define a scenario of how people would interact within space. The models are the input to LEGION Simulator that performs the analysis resulting in a simulation.

Bentley intends to include the capabilities of LEGION Model Builder in OpenBuildings Station Designer so that pedestrian scenario planning and simulation become an integral part of the BIM design process and facility operations. These capabilities will be added incrementally, over a series of product releases, until all capabilities have been integrated. After successful development of pedestrian scenario planning in OpenBuildings Station Designer, support of LEGION Model Builder will be discontinued.

Bentley has acquired LEGION, the leading developer of a pedestrian simulation software and an essential tool for designing public spaces


Bentley Systems is a software development company that supports the professional needs of those responsible for creating and managing the world’s infrastructure.