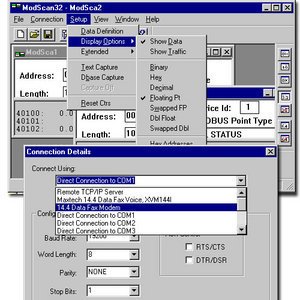 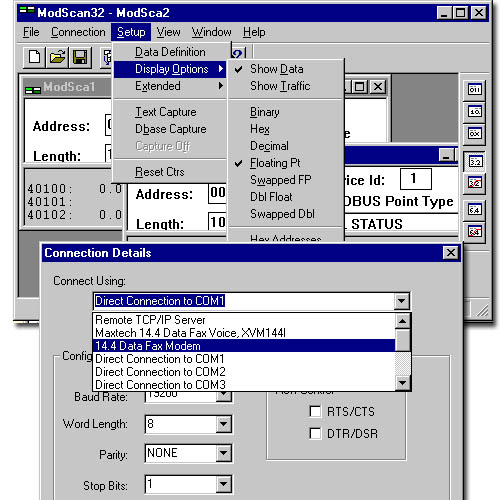 ModScan32 is an expanded version of the popular 16-bit application ModScan. It is a Win32 application designed to operate as a MODBUS Master device for accessing data points in a connected PLC compatible slave device. Like it's 16-bit predecessor, ModScan32 is designed primarily as a testing device for verification of correct protocol operation in new or existing systems. Extensions have been built in to allow third-party data acquisition via Control Automation routines and/or the Microsoft Jet Database engine. ModScan32 allows multiple documents to be opened, each actively scanning a series of data points from one or more connected MODBUS slaves. Coils and registers, may be read and/or written from any open ModScan32 document using MODBUS Commands 01-06.

The specified MODBUS slave device is polled by the ModScan32 document on a cyclical basis specified by the user. Any address supported by the device may be scanned and the associated values listed on the bottom of the display. Communications errors or Exception Responses returned by the slave device are listed on the ModScan status line. Writing a specific data point is as simple as double-clicking an address/value combination and entering the desired value in a pop-up dialog:

ModScan32 supports many features added as a result of requests made by users of ModScan(16). Included in these is the ability to write a customized user-defined message to a connected slave device and the execution of test scripts for production testing environments.