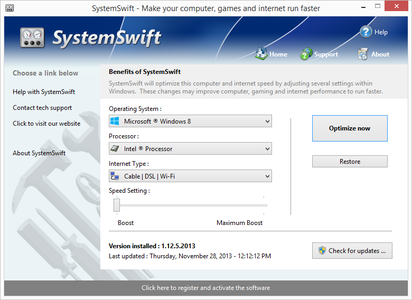 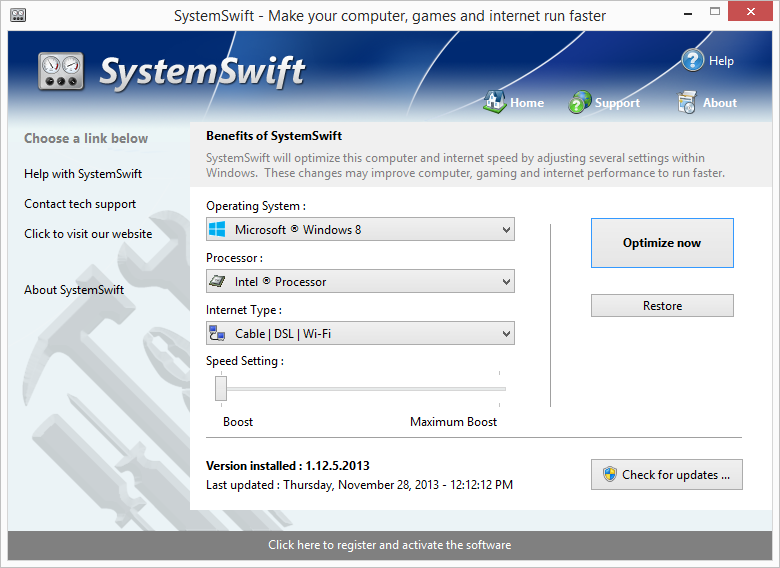 PGWare SystemSwift 2.11.23.2020 Multilingual | 5.2 Mb
SystemSwift sets the standard for PC and game optimization software. A combination of our three products PCMedik, GameGain and Throttle; SystemSwift instantly makes your computer faster and fixes common problems associated with frustrating slowdowns and errors, squeezes out every last bit of performance your computer and games are capable of and increases the speed of your internet connection. Do you remember when you first turned your brand new computer on and how fast it worked? With SystemSwift and a click of the mouse you can bring back this speed to your computer instantly.

SystemSwift quickly scans your computer for common problems and fixes them, it then makes several permanent changes to Windows so your computer feels like it is brand new once again. Don't deal with a slow computer and make tasks take longer to complete, install SystemSwift and make your computer run faster.

Over time as you install new and updated software, you get the impression your computer is slower due to these applications being more demanding of faster hardware. SystemSwift makes your computer faster by making several changes to Windows settings; for instance it turns off several animations that degrade performance, instructs the CPU how to prioritize background tasks, how files are loaded and written to the hard drive, changes to the way memory is used when programs use the memory swap file and the overall speed of your internet connection and latency.

Heals Problems
Many small problems on your computer lead to a combined loss of performance over time, PCSwift will scan your computer for these problems and instantly repair them.

Constant Updates
We constantly update PCSwift with new system performance tweaks; this allows your computer to keep up with the latest software that demand faster hardware.

Faster Gaming Graphics
Increase the frames per second you are getting when playing the most current and exciting games without having to purchase a new graphics card, memory, or CPU.

SystemSwift also improves the speed of your internet connection; these system changes work with all internet connections such as Cable, DSL, U-Verse, Fios and dial-up. If you notice during multiplayer gaming that you are getting long pings and lag, SystemSwift can help improve the speed of your connection. SystemSwift makes several Windows registry and system changes to increase the performance of your current gaming hardware; this allows you to play the most recent games without having to spend hundreds of dollars to upgrade your hardware. These changes made to your computer improve memory usage, how foreground applications are prioritized with the CPU, hard drive access read and write speeds, how fast graphics can display on your screen, the overall speed of your internet connection and latency. SystemSwift does not make changes, no patches and no modifications to games themselves, thus no anti-cheat detection software considers our software cheating software and you will not be banned from those gaming networks.

Features
Optimizes your computer hardware to allow your computer to run faster and increase the speed of your internet connection for faster downloads and speed.
Increases the speed of all internet connection types such as Cable, DSL, U-Verse, Fios and dial-up.
Increase the frames per second that is displayed allowing games to play much smoother and increase your enjoyment of these games.
SystemSwift repairs common problems found on most computers and instantly fixes them to improve computer stability and performance.
Changes are made to the Windows system permanently, allowing you to perform a single one time tune-up to increase performance forever.
New and improved modern user interface, easy and intuitive to use and compliant with Windows user interface guidelines.