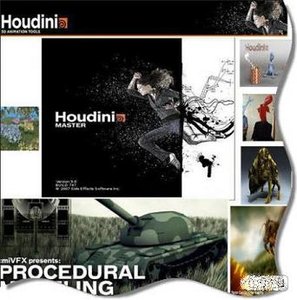 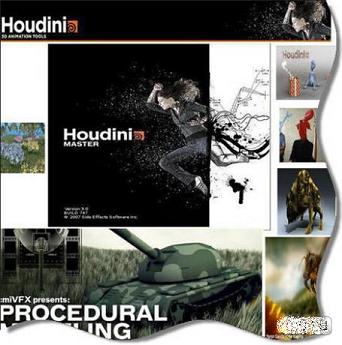 SideFX Houdini Master 10.0.295 (x32 / x64) | 476 Mb
Houdini 10 is the first commercially-available application to slice up and distribute fluid simulations over a network of computers. 3D artists will benefit from faster simulation times in addition to the ability to create simulations at a much bigger size and scale than would be possible with a single computer. Studios and boutiques can integrate these distributed fluid sims using existing pipeline tools, or work with HQueue a new python-based job manager which can also distribute Mantra renderings. HQueue jobs can be launched using a Houdini output node and then monitored using HQueue’s artist-friendly web interface. For fluid simulations, each node on the farm can be equipped with Houdini Batch to process the slices and keep your workstation licenses free for interactive work.

VFX artists can create high quality smoke and fire in Houdini 10 with the new Pyro FX tools. Utilizing cutting edge up-resing technology, Pyro FX makes it possible to create a low resolution simulation in planning out a shot, then increase the resolution on subsequent passes to add higher level of details and refinement. Pyro FX comes with several pre-made Pyro FX such as Billowy smoke and Fireball to give artists a head start when setting up a simulation.

Lighting artists can take advantage of the progressive Interactive Photorealistic Rendering (IPR) feature in Houdini 10. This IPR workflow supports both raytracing and Physically Based Rendering (PBR), providing feedback whenever a scene changes. An update will be triggered when shader and light parameters are tweaked or when objects, cameras and lights are added, moved or even removed. Artists can drag and drop materials into the IPR window and can “control click” to access shader parameters for any part of an image. Snap shots can be taken to compare with other iterations of a shot using features such as “diffing”.

Houdini 10 also includes support for Stereoscopic 3D in both the viewport and Houdini’s image viewer. The Houdini stereo camera supports both anaglyph and horizontal interlaced stereo and includes control for parallax and inter-axial distance. Studios can preview their 3D work from within Houdini and can generate stereo images at render time.

Houdini 10 includes many more features such as:
* Motion FX which gives artist-friendly access to the procedural power of Houdini’s channel operators (CHOPS).
* Improvements to Network Usability including new align tools, and the ability to quickly connect and disconnect nodes using fewer clicks.
* Physically Based Rendering (PBR) is now fully supported in Houdini’s multi-threaded shading language.
* Deep Camera Maps which make it possible to render volumes and objects into separate passes then combine them perfectly.
* The Rigid Body Solver now supports ODE for faster simulations.
* Houdini’s cloth solver can be used to simulate the Crumpling and Tearing of dentable and elastic surfaces.
* The wire solver now supports Parting and is much faster when simulating longer wires.
* New Knife and Edge Loop modeling tools.
* And much more