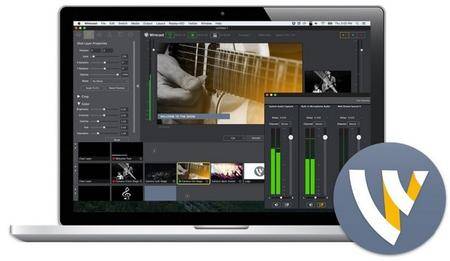 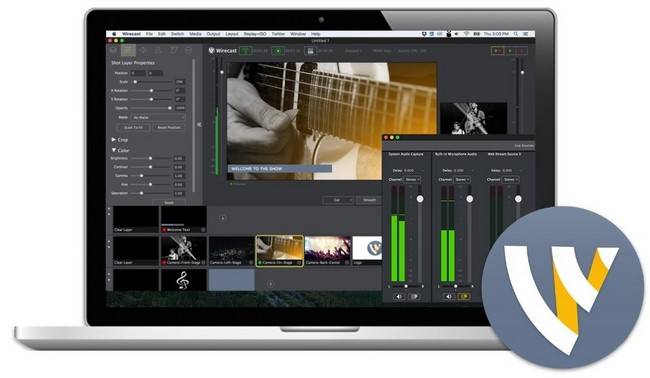 Telestream Wirecast Pro 14.2.1 (x64) Multilingual | 251.4 MB
Everything you need to stream live video from your desktop to the world! Wirecast lets you capture an unlimited number of input devices from live camera feeds, iOS cameras (coming soon), computer desktop, Web feeds, and more. Then add polish and professionalism to your broadcast with live switching, transitions, titles, lower thirds, and more.

Produce your show.
Add polish and professionalism to your broadcast with live switching, transitions, titles, lower thirds and more.

Stream it live.
Use the built in multiformat encoding capabilities and easily stream to integrated streaming services and CDNs.

News / Sports
For a fraction of the cost of traditional broadcast hardware, Wirecast allows you to quickly and easily broadcast breaking news and live sports. Carry Wirecast on a laptop for remote newsgathering and production. For sports, use integrated scoreboards and replay for high quality live streams.

Education
Live stream your lectures, interviews, workshops for professional development or student instruction. Using Wirecast, anyone can now create professional live streamed broadcasts for sharing live or on-demand via the web with just a camera, a computer and an internet connection.

Houses of Worship
Engage and expand your remote congregation with live streams of your services and events. Easily train volunteers to use Wirecast to switch between multiple cameras, add graphics and even record a version for on-demand viewing. Wirecast is a flexible software solution that can be used on existing hardware.

Output Statistics
Displays the statistics window for your broadcast. You can select to display: Framerate, System CPU Usage, and System Memory Usage.

Video Sync
Delay the video and/or audio of an incoming source to better sync. Save thousands of dollars on expensive hardware.

ISO Recording (Pro only)
Create high-resolution recordings of your individual (isolated) cameras or audio sources. Isolate clean shots (no titling or lower thirds) that can be used later for editing offline or for live replay during an event. (Note: must have valid license to use this feature; this is a Pro feature only.)

New Ways to Configure Text
Add text to your broadcast from a variety of sources: typed in text, from a file, or from an RSS feed. Type in text and display it instantaneously. Use file-based text monitoring to read data from an external .txt file. The RSS feed feature allows you to have a running ticker built into your shots through the text widget.

Color Correction
Adjust the brightness, contrast, gamma, hue and saturation for all of your video and graphic sources.

And many more new features and improvements, including…

Updated, streamlined User Interface
Our new streamlined User Interface (UI) enables quicker access to shot editing features and more control over every aspect of your broadcast. This includes a new Shot Editor panel, with control sliders for modifying properties, in-shot toggles for turning off and on video and audio sources; plus an all-inclusive source dropdown; playlist tabs and more.

Audio Monitor/Mix Minus
With the new mix minus feature, you can now take out specific audio sources from your output monitoring. This lets you monitor the full stream audio output while turning off the monitoring of your own voice.

Audio Playout Device Selection
Choose where you want Wireacast to play out its audio. Select any available system audio device in the Wirecast Preferences to route all Wirecast audio to for more precise monitoring.

Redesigned Audio Mixer
Let’s you control every audio source within your document from the specialized audio mixer window. Mix minus, panning, source selection, muting and individual source volume controls are all now beautifully packaged in one spot for easy audio control. This minimizes the need for external hardware and keeps your stream organized.

Redesigned Screen Capture
Replaces Local Desktop Presenter as an easy way to bring in your computer screen, or application window. Great for adding Keynote or PowerPoint slides into your broadcast.

Solid Color Generator
Add in a solid color as a source. Great for use as a background, or in lower thirds.