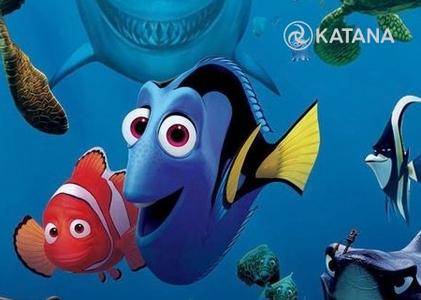 The Foundry Katana 3.0v4 | 293.2 mb
The Foundry launches the newer update to its professional look development and lighting tool. This update include new capabilities and bug fixes that improve the 3.0v3 release.

Hydra Viewer
- TP 347584 - The Hydra Viewer now supports surface shaders and textures assigned to facesets.
- TP 354301 - The Hydra Viewer now allows the user to set the look-through location by dropping a camera or light location on a viewport. This functionality is also available in other Viewer API-derived viewers.
- TP 332495 - A new parameter named faceCulling has been added to ViewerObjectSettings nodes, in order to allow pieces of geometry in the Hydra Viewer to be rendered without culling faces.

Hydra Viewer
TP 351596 - Katana could crash when the Hydra Viewer processed invalid indices data.
TP 359674 - Katana could crash when changing the viewport layout.
TP 347830 - Manipulators were not shown in newly-created panes when changing the pane layout.
TP 360123 - Manipulators were available for objects whose targeted attribute editor node was locked.
TP 356248 - The Translate manipulator did not take into account user-defined pivots, as might be set by a Transform3D node.
TP 356705 - Manipulating locations during a live render could cause continuous live updates (during the manipulation) to stop working for all locations.
TP 356223 - The Live Render from Viewer Camera button did not reliably update a Live Render when looking through a light or implicit (non-scene) camera.
TP 352389 - Changing the looked-through location from a scene graph camera to a built-in camera caused live rendering from the Viewer camera to stop working.
TP 357182 - The Hydra Viewer did not support geometry.arbitrary.displayColor attributes on polymesh locations with normals defined per face vertex.
TP 357876 - The Hydra Viewer did not support geometry.basis attributes on curve locations.
TP 353644 - The Hydra Viewer did not support non-indexed UV values. These values can now be provided in geometry.arbitrary.st.value. As indices are not provided, UV values are matched to the vertex list in order (sequentially). This also resolves TP 344566.
TP 355493 - Standard Locators (cameras and lights) were being drawn over the marquee selection tool.
Other Bug Fixes
TP 56545 / BZ 28549 - Main menu commands that create nodes (notably File > Import…, File > Import LiveGroup…, and Help > I want a pony) always placed those nodes at the root level of the node graph, rather than within the current Group or LiveGroup.
TP 65242 / BZ 34870 - When rendering merge outputs, Katana did not create parent directories as required.
TP 81702 / BZ 39736 - Manipulators in the Viewer tab were available for objects whose targeted attribute editor node was locked.
TP 360962 - The Rotate manipulators in the Viewer tab allowed interaction with non-interactive locations.
TP 361674 - The Center of Interest manipulator in the Viewer tab allowed interaction with non-interactive locations via its central handle.
TP 207623 - When entering a single number only in a Backdrop node, that number was not preserved when saving a Katana project or when copying and pasting that node.
TP 353687 - When creating a <Renderer>OutputChannelDefine node for a renderer other than the default, the Parameters tab for the node did not function.
TP 357865 - When changing the root location path of a GafferThree node in which packages from the incoming scene were previously adopted for editing, those edit packages wrongly disappeared from the table of packages, but were still present in the GafferThree node, and wrongly continued to edit the respective adopted packages under their previous location.
TP 359420 - Locking (or unlocking) a PrimitiveCreate or Material node while its parameters were visible in the Parameters tab raised an exception and failed to update the appearance of the parameters.

Bug Fixes
- Fixed and improved several log warnings in the KeyboardShortcutManager, among other small fixes:
. If a certain keyboard shortcut is already in used by a tab, the shortcut is now included in the log message.
. The empty keyboard shortcut is now allowed in several in several tabs; previously it would print a log message "Shortcut has already been registered by…".
. New warning for the use of unsupported Emacs-style key sequences; previously this style was silently ignored.
. Prevent invalid shortcuts from being displayed in the Keyboard Shortcuts tab.
. Allow empty shortcut attributes in the shortcuts.xml file to disable built-in keyboard shortcuts.
- TP 354540 - User-defined keyboard shortcuts for key event handlers registered with Katana's KeyboardShortcutManager were silently ignored.
-TP 333426 - When the following hints were defined for a floatRamp widget in a GenericAssign XML file, errors were raised when creating the parameter interface for the node type:
. minPosition
. maxPosition
. minValue
. maxValue

Live Groups
TP 85118 / BZ 41152 - When editing parameters of a node that is part of a LiveGroup node and reloading the parent LiveGroup node, the UI state of the Parameters tab is reset. This includes scroll bar positions, selections of items, and selections of nested tabs (for example Object, Material and Linking tabs for a Gaffer node).
TP 84998 / BZ 41092 - When reloading a LiveGroup node's parameter interface and contents from its source, parameters of child nodes that are edited in floating panes disappear from those panes.
TP 84020 / BZ 40598 - Reverting a LiveGroup node does not revert its user parameters.
TP 84019 / BZ 40599 - Parameters that are added to LiveGroup nodes are wrongly discarded when performing a reload from source, leading to loss of data.
TP 84018 / BZ 40600 - Undoing a revert of an unpublished LiveGroup node does not restore the LiveGroup's editable and modified state.
TP 83061 / BZ 40237 - Nodes can be dragged into the Group bubble of a non-editable LiveGroup node.
Materials
TP 269449 - Choosing Edit Shader Parameters from the main wrench menu of Material nodes does not show wrench buttons next to shader parameters. This can be worked around by toggling the edit flag on the node.
TP 199304 - The namespace parameter on Material nodes wrongly allows the insertion of Unicode codepoints outside the ASCII range.
TP 191052 - Katana does not have any support for the texture reference object workflows of V-Ray for Maya.
Parameter Expressions
TP 188533 - Expressions linked to non-local parameters on not previously edited Material nodes can't be evaluated.
TP 105434 / BZ 47520 - Reference Expressions may not refer to dynamic parameters such as shader parameters.
TP 60457 / BZ 31790 - Setting an array or group parameter to an expression results in an invalid expression. Upon setting a valid expression (for example, an evaluation of an equivalent parameter on another node using getParam), the parameter is not immediately updated. To workaround this issue, close and reopen the parameter, or flush caches while the node is not edited.
Rendering
TP 344118 - (Windows only) When installing Katana and opting to install the bundled version of 3Delight, the installation of 3Delight is made by modifying system-wide environment variables such as KATANA_RESOURCES. Thereafter, launching any version of Katana will pick up this installation of 3Delight, which may be incompatible with the version of Katana being launched.
NOTE: This does not affect Linux, where a bundled 3Delight installation is tied to its corresponding Katana installation.
TP 208802 - Closing the Histogram tab after use leaves the Monitor tab unable to display rendered images.
TP 176598 - Use of nodes that modify Graph State Variables in Interactive Render Filters is not currently supported.
TP 114182 / BZ 49288 - When exporting a Catalog item you need to specify the export folder path to an existing folder. If the folder you're trying to export to does not exist on disk Katana will fail to export.
TP 94052 / BZ 44199 - The Repeat Previous Render menu command only works on renders started from a 3D node's context menu.
TP 74799 / BZ 36926 - The rendererSettings > displayOptions parameter of a RenderOutputDefine node for the PRMan renderer, shown when its type parameter is set to 'raw', cannot be set using the Parameters tab.
TP 12517 / BZ 16168 - Only one Monitor tab may display the results of a Preview Render. The use of multiple Monitor tabs is not currently supported.
Widgets
TP 123558 / BZ 50911 - When changing an array parameter's tuple count/size, any corresponding attributes are not properly updated in the Attributes tab.
TP 65347 / BZ 34949 - Using Compiz can lead to text fields not receiving focus events correctly due to an incompatibility between Compiz and Qt. Depending on your configuration, disabling Compiz "desktop effects" may resolve the problem.
Miscellaneous
TP 337653 - Katana logs deprecation warnings when loading the 'PyMockAsset', 'PyMultiMockAsset' and 'PyMockFileSeq' shipping example Asset API plug-ins.
TP 218742 - (Windows only) Katana must be installed to a path no longer than ~140 characters. Attempting to install to a longer path results in an unintuitive error: "The system cannot find the path specified."
TP 112544 / BZ 49051 - The Viewer tab may lose sync with the Scene Graph tab when changes to expansion state are interrupted.
TP 107038 / BZ 47853 - Indication of attribute source nodes (such as the yellow 'glow' in the Node Graph tab) is unavailable as of Katana 2.0v1.
TP 84326 / BZ 40709 - The Alembic library does not support multiple process or thread access to an Alembic file. This means that a crash occurs when modifying an Alembic file outside Katana, while it's loaded in an open Katana scene. To avoid this, you must Flush Caches before attempting to update any modified Alembic files.
TP 80738 / BZ 39261 - Operations that lock and unlock nodes do not currently create entries in the Undo History, which can lead to an incorrect node graph state when undoing and redoing operations.
TP 71965 / BZ 36691 - State badges are currently shown for attribute values of dynamic array child parameters, even though only their parent array parameter should appear with a state badge.
TP 70217 / BZ 36176 - The 2D node Disk Render Upstream Render Outputs option does not use the batch render method, batchRender, for upstream render nodes, instead using diskRender.
TP 70196 / BZ 36170 - Control keys (notably arrow keys) do not function as expected in shell mode.

Katana is used in VFX, broadcast, and animation as a post-processing tool for final lighting. It uses a recipe approach to establishing lighting, making it easier for users to establish a lighting profile that can be reused in other scenes or projects.

About The Foundry. The Foundry is a leading global developer of creative software used to deliver high-end visual effects and 3D content for the design, visualization and entertainment industries. The portfolio empowers artists to create inspiring and technical images and visual experiences in media production (film, commercials, episodic television, gaming, and virtual and augmented reality), and product and industrial design.

The company was founded in 1996 and is headquartered in London, with offices in Silicon Valley, Manchester, Los Angeles, Shanghai, Dublin and Austin. In November 2015 Alex Mahon was appointed as CEO while Bill Collis became president.