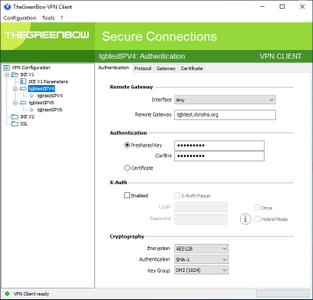 TheGreenBow VPN Client 6.64.003 Multilingual | 21.4 Mb
Enterprises need to have remote access to the company's applications and servers quickly, easily and securely. TheGreenBow VPN Client enables employees to work from home or on the road, and IT managers to connect in remote desktop sharing to the enterprise infrastructure. The VPN Client offers a range of features from simple authentication via simple login to advanced full PKI integration capabilities.

Script configuration
Scripts may be configured in the 'Scripts' tab. This tab can be found in Phase 2 Settings panel. Scripts or applications can be enabled for each step of a VPN tunnel opening and closing process:
Before tunnel is opened
Right after the tunnel is opened
Before tunnel closes
Right after tunnel is closed
This feature enables to execute scripts (batches, scripts, applications…) at each step of a tunnel connection for a variety of purposes e.g. to check current software release, to check database availability before launching backup application, to check a software is running, a logon is set… .
It also enables to configure various network configuration before, during and after tunnel connections.