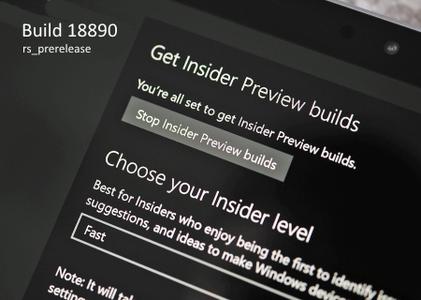 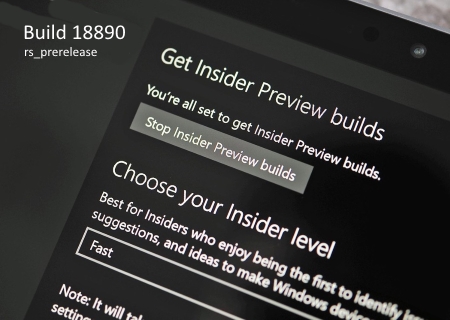 Windows 10 Insider Preview build 18890.1000 is an assembly code-named 20H1, which is available to members of the Windows Insider program with priority for receiving Early Access and Skip Ahead updates. This assembly belongs to the development branch RS_PRERELEASE of the next major update of Windows 10, which is expected in spring (March-April) of 2020.

General changes, improvements, and fixes for PC
- We fixed a hang in the audio service when checking whether a machine was licensed to use spatial audio.
- We fixed an issue that could result in the desktop being unexpectedly slow to refresh (if you right-click the desktop and select Refresh or press F5).
- We fixed an issue resulting in not being able to access network shares if you booted into Safe Mode with Networking.
- We fixed an issue where hardware keyboard text predictions wouldn’t appear (if enabled) when the es-US keyboard was active.
- We fixed an issue that could result in cumulative updates potentially failing with error 0x800f0982 if a language pack update was happening at the same time.
- Thank you for all of the feedback you provided on Friendly Dates in File Explorer. At this time, we’ve decided not to roll out Friendly Dates to users as part of the 19H1 release. Insiders will see this option go away starting today, regardless of build number.
Known Issues
- There has been an issue with older versions of anti-cheat software used with games where after updating to the latest 19H1 Insider Preview builds may cause PCs to experience crashes. We are working with partners on getting their software updated with a fix, and most games have released patches to prevent PCs from experiencing this issue. To minimize the chance of running into this issue, please make sure you are running the latest version of your games before attempting to update the operating system. We are also working with anti-cheat and game developers to resolve similar issues that may arise with the 20H1 Insider Preview builds and will work to minimize the likelihood of these issues in the future.
- Some Realtek SD card readers are not functioning properly. We are investigating the issue.
- If you use remote desktop to connect to an enhanced session VM, taskbar search results will not be visible (just a dark area) until you restart searchui.exe.
- We’re investigating reports that on certain devices if fast startup is enabled night light doesn’t turn on until after a restart. (Note: The problem will occur on a “cold” reboot or power off / power on. To work around if night light doesn’t turn on, use Start > Power > Restart.)
- There’s a noticeable lag when dragging the emoji and dictation panels.
- Tamper Protection may be turned off in Windows Security after updating to this build. You can turn it back on.
- Some features on Start Menu and in All apps are not localized in languages such as FR-FR, RU-RU, and ZH-CN.
- Scrolling with the mouse wheel or touchpad may stop working in certain places after upgrading. If you experience this, going to Settings > Devices > Mouse, and changing one of the settings (for example, Choose how many lines to scroll each time) should resolve it until shutdown or reboot.
Known issues for Developers
- If you install builds from the Fast ring and switch to either the Slow ring or the Release Preview ring, optional content such as enabling developer mode will fail. You will have to remain in the Fast ring to add/install/enable optional content. This is because optional content will only install on builds approved for specific rings.