End It All 2 (for fast closing of all running applications)

Posted By: phil_ga
End it all 2 (for fast closing of all running applications) 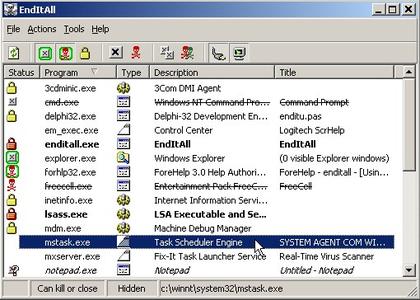 End It All 2 (for fast closing of all running applications) 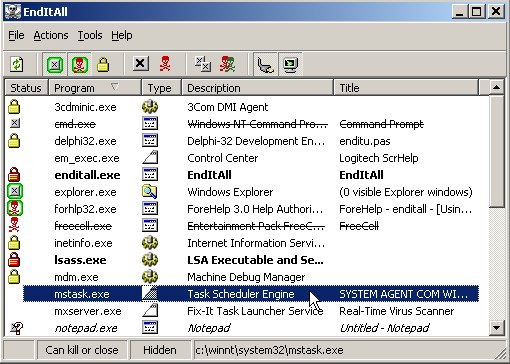 Many software manufacturers urge users in no uncertain terms to close all running programs (and this includes applications that run hidden in the background) prior to running their program's setup routine, and many users make it a habit to close all programs prior to running disk utilities such as ScanDisk and Disk Defragmenter.

For users running a number of third-party software applications the process of pressing CTRL+ALT+DEL and Ending Task on each individual program (10, 15, even in some cases 20 or more!) one by one can be a tedious process. EndItAll 2, a small utility authored by Neil J. Rubenking (a Contributing Technical Editor for Ziff-Davis' PC Magazine) makes closing all running applications a quick and easy process.

EndItAll 2 lets you easily terminate in one shot all non-essential programs and processes for the purposes of:
installing new software
uninstalling software
running utilities such as ScanDisk and Disk Defragmenter
running demanding and/or finicky games
writing to CD-Rs that need a big buffer

The EndItAll 2 main window displays a list of running programs just as the CTRL+ALT+DEL "Close Programs" dialog does, as well as a few processes which don't even appear in Microsoft's C+A+D list. One can opt to handle various programs and tasks differently by either protecting them altogether or specifing whether or not they should be "killed" if they cannot be "closed" (exited in a conventional manner with a prompt to save any unsaved data). By default key processes such as KERNEL32 are designated as "protected" and will not be terminated. While some initial experimentation is highly recommended once the optimal settings are determined one can save them and have them implemented automatically.

Version 2 is a major update to EndItAll, which was originally published on the PC Magazine Extra Web site (it was freeware then). EndItAll 2 was written by Neil J. Rubenking, and first appeared in PC Magazine October 16, 2001 (v20n17). Includes source code.

It used be freeware, but I guess it got too popular, as you have to buy this new version (or grab this link instead!). Enjoy.

or for flashget users to copy/paste: