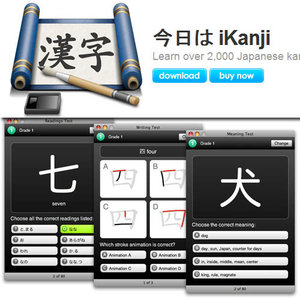 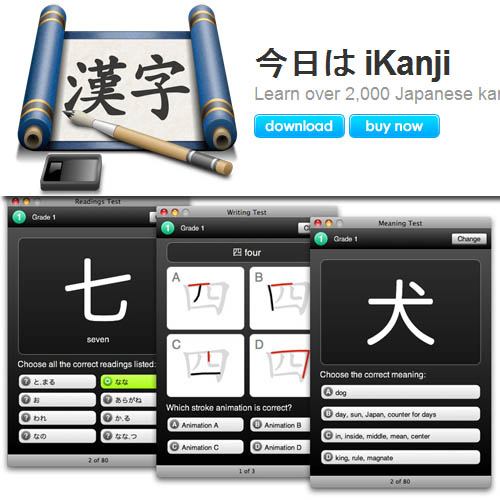 Learn over 2,000 Japanese kanji characters. If you are studying Japanese then you need iKanji - the most comprehensive kanji study tool available on the Mac, designed with all the care and attention you expect. There are three multiple choice test modules, Kanji Meanings, Kanji Readings and Kanji Writing. The meanings test drills you on kanji meanings, randomly selecting kanji similar to the one in question to make the questions a little trickier. The readings test displays 8 possible kanji readings (the reading type displayed is selectable) and you must identify all the readings for the kanji that are displayed. 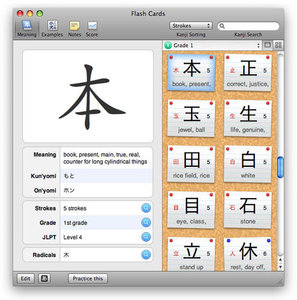 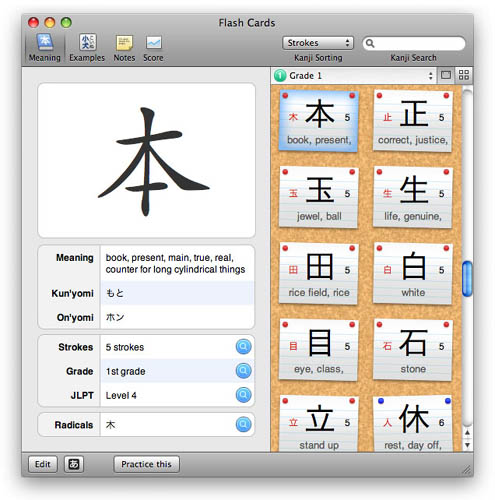 The writing test shows you up to four variations on the stroke drawing for a given kanji and asks you choose the correct one.

iKanji will remind you of kanji which you failed to identify correctly at the end of a test and keeps detailed scores you can view in the flash card module for each test type.

iKanji makes it very easy to test yourself on a specific subset of kanji, just press the practice button on the kanji you want to test and then pick the practice set in any of the test modules.

iKanji contains 2230 kanji, that includes Japanese school grade kanji up to level 6 and JLPT* levels 1 to 4. In addition there are 214 kanji radicals. Over 16,000 example words are also provided in kanji and kana with their meaning in English.

The flash card module lets you quickly browse and search for kanji, shows you animated stroke animations for over 800 kanji as well as readings, meanings and example words.

All kanji flash cards in iKanji are freely editable and you can easily add your own too if you want to practice additional kanji.

* 2230 kanji are built-in, and you can easily add your own
* Covers Japanese school grades 1 to 6, JLPT* levels 1 to 4 and 214 kanji radicals
* Contains over 16,000 example words in kanji and kana
* Over 800 kanji have stroke animations and you can easily record your own. More are added with each update!
* Quickly sort kanji by stroke count or radical
* Search by kanji, meaning, radical and example words
* Get an 'at a glance' overview of your kanji proficiency by looking for kanji marked with bronze, silver and gold stars.

* See your test performance over time plotted as a graph in each of the testing areas.
* The kana input palette makes it easy for a novice to enter kana characters without needing to enable Japanese text input
* Simply mark any kanji to quickly build a subset to practice yourself on.
* Freely add notes to each kanji to aide your own learning techniques
* Kanji are rendered using the beautiful built-in Japanese fonts, not ugly bitmaps as used on many websites and in competing products.
* Designed to take advantage of features in Mac OS X 10.5 Leopard including Core Animation