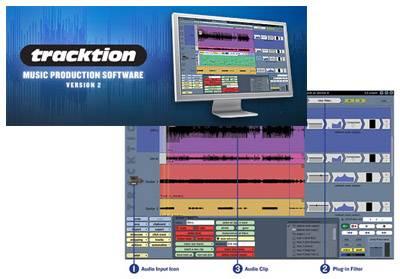 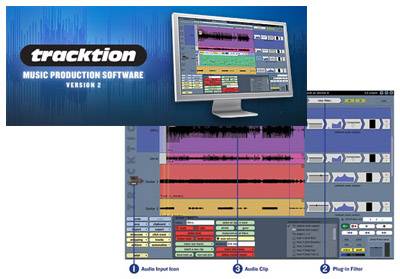 Mackie Tracktion 2.1.0.6 (BEAT Release) | 25 Mb
If you enjoy clicking through layers of windows to create music, then Tracktion software is definitely not for you. It won't pretend to be a mixing console… It doesn't have cute 3D racks or patch cables… It doesn't contain a single instrument icon… Instead, Tracktion lets you get right to the business of making music using a single interface for everything — from audio recording and MIDI production tools to mixing and mastering. It's a revolutionary concept, as evidenced by thousands of fervent users and dozens of glowing reviews. And now we've made it even better. Welcome to Tracktion 2.

If you've tried other music production software on the market today and found it cumbersome, limited or just plain un-inspiring, you've come to the right place. Tracktion is a revolutionary, easy-to-use music production application that contains everything most people will ever need to professionally record and mix music on a Mac or PC - without all the hassles and limitations of other audio software. Tracktion's hallmark is a clean, single-screen interface and streamlined operation, whether you're recording tracks, MIDI programming, or mixing down songs. It offers rock-solid operation, VST and ReWire support, and very low CPU usage with operating systems ranging from Mac OSX to Windows 2000 and XP. And it contains a whole host of professional features that you can actually use from day one.Developed by programmer Julian Storer and Mackie, Tracktion 2 is a major step forward from the original version, adding more than 100 new features and updates, while still maintaining the core feature set that has made Tracktion a runaway success.

As easy as it is to build in new features, our engineers are intent on preserving Tracktion's elegantly simple interface at all costs-after all, that's what attracts most people to Tracktion in the first place. Case in point, our new update, v2.1, adds a bevy of powerful new features without any operational complexitivity.

Here's some highlights:
Tracktion 2.1 – Changes/New Features
• Custom Control Surface Creation: Control Tracktion's transport, navigation, options, and channels via your favorite low-cost hardware controller, or even the sliders, buttons, and keys on your MIDI controller keyboard.
• MP3 Import and MP3/OGG Export: Import MP3 files using the LAME codec, and export both MP3 and OGG files with the new menu item Export>Create an MP3/OGG file. • MIDI Loop Recording: Create and build MIDI clips in loop record mode much like the way you can with audio files.
• Support for the Frontier Design Group TranzPort: Control Tracktion with the Frontier Design Group TranzPort Wireless DAW Controller.
• Filter Icon "Quick Control" Parameter: All filter icons can now display any automatable parameter as a small horizontal slider on the filter icon for even quicker adjust­ments.
• File Import Improvements: Select and import multiple files from the import file dialog. Even drag and drop, or import from a CD on the PC.
• And many more…

NOTE: I did a search on AvaxHome before posting and found an old post from quil__23 which seems to be down. That's why I'm reposting it !