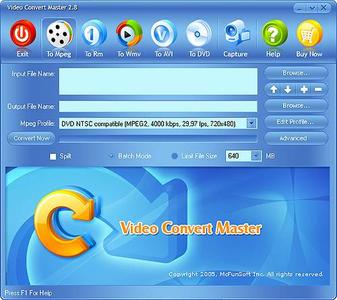 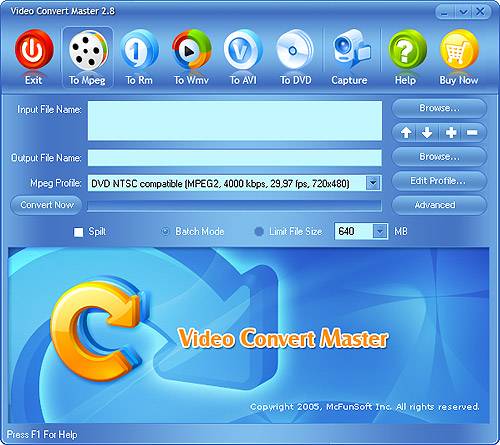 McFunSoft Video Convert Master ver. 6.0 | 6 Mb
McFunSoft Video Convert Master can burn, convert, split and merge: AVI, MPEG, MPEG 1, MPEG 2, MPEG 4, VCD, DVD, SVCD, RMVB, RM, WMV and any most used video formats. It is a home video software to realize requirements of watching at home theater or storing in PC. It is compatible with DVD/VCD/ SVCD burning. It is easy-in-use, only in 4 steps to burn, convert, split or merge movies.

Highlights :
- CONVERT BETWEEN ALL VIDEO FORMATS
Such as AVI (DivX, XviD, etc), MPEG 1,2 and 4, QuickTime, Real Video, WMV and DVD, SVCD, VCD.
- Burn DVD, VCD or SVCD
Create movie DVDs from video files of all supported formats to watch them on your home DVD player with friends and family.
- SIMPLE TRANSFER
Capture from DV and analog cameras, VCRs, TV tuners and WEB cams.
Start making your movies from the first run.
- BATCH MODE PROCESSING
Process several files at once. Merge and split them. Delete unwanted scenes from your movies. Join several video files and make one DVD.
- EXTRACT AUDIO AND IMAGES
Save audio streams as audio files, extract single frames and save them as image files.

Fast Conversions:
- With the combination of DirectX 9.0 and the high-speed converting encoders available, you really won't find any application that converts faster than Video Convert Master.

Create DVD, VCD and SVCD:
- Video Convert Master helps you to burn VCD/DVD/SVCD with AVI, WMV and other video formats. Additionally its VCD/DVD/SVCD burning completely compatible with either PAL or NTSC mode. Just drag the converted file into your favorite CD burning application, and burn it to VCD, DVD or SVCD.

Video Batch Conversion:
- Want to convert 'Star Wars' collection from AVI to something you can watch on DVD player? Well, 20 hours movie might take a while to convert, and you don't want to be sitting there watching Video Convert Master toggle the bits. So, just add all AVI files you want to convert, go to bed, and the next morning DVD videos are all there waiting for you.

Split & Merge:
- Burning 'The Lord of Rings' generally takes more than two discs in VCD formats. If you really want watch it with your VCD player, you can think about splitting it. On the other hand, you may want to merge 2 AVI videos into one sometime. Video Convert Master provides solutions in splitting and merging.