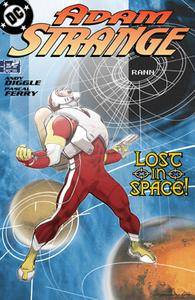 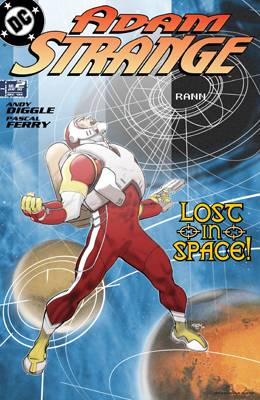 Continuing the thrilling new adventures of DC's premiere science-fiction hero! Adam Strange survives an alien attack as he discovers clues to what's happened to his adopted homeworld, Rann! A LexAir flight is coming in to land at an airport, though the control tower says that it is unclear to land because of a couple strange dots on their radar – which happens to be Adam and the alien fighting. Adam tries to lose the missiles, but they are homing missiles and not only that, but they can learn from their previous mistakes. Adam brings out his blasters and shoots the tow missiles, but they are too close and Adam gets caught in the explosion sending him into a skyscraper under construction. Adam also realises that his jetpack should restart at any moment. The alien comes down and says Adam killed its boyfriend – the alien from issue #1 that Adam was fighting. He is to be brought alive, but all it wants is him dead. It launches another missile, and Adam jumps off the elevated level in the skyscraper and calculates that he has 12 seconds until the jetpack can restart itself. He spreads out his body to slow his descent and hits the restart button. He learns of the missile following him, but he can't just lose it. The missile learns from its mistakes. He hopes that it is a heat-seeking missile and takes off his jetpack, letting the missile slam into the alien who falls to the street from the building. Adam then interrogates the alien, asking who had sent them. Just then, the armour begins a self-destruct sequence and persuades the alien to press the armour's upward thrusters. Adam holds onto the armour and both of them shoot up into the air and steers it up there. The alien asks how Adam is going to get it out of its armour, but he just lets it explode up there. He is now convinced that Rann's explosion was faked. Adam makes his way back to his apartment and looks behind the fridge where a power-suit is kept. He puts it on and its system goes online, mentioning his life support system and targeting system. Adam flies off, and stuns some cops with his blasters as they run after him. He is seen above Earth, looking down onto it and using the Zeta Beam device he took from the alien, he sets it to look for Alpha Centauri and Rann. His armour then warns him off heat and radiation levels. He finds planetary debris, and concludes, from the massive levels of Zeta radiation that "somebody stole the planet!"