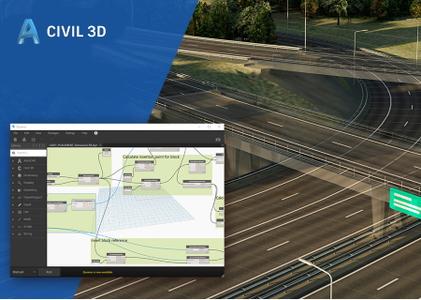 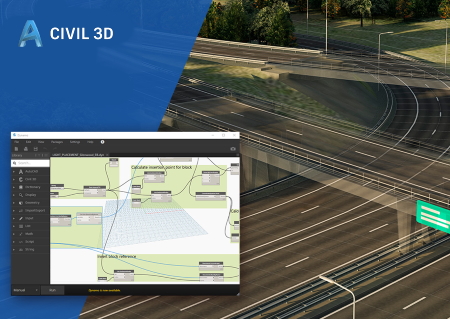 Design Efficiency Updates
- Create, edit, and export rail lines using the new commands on the Rail ribbon tab
- French and German design rules are now available for rail platform edge creation.
- The rail turnout catalog has been extended to include French turnouts based on SNCF standards.
- Use new options for viewing pressure networks in profile view.
- Use the new enhancements in the Analyze Gravity Network command
Production Efficiency Updates
- Use enhanced reference template features to manage styles and settings.
- The Manage Data Shortcuts command has been updated with the features for specifying a different data shortcut project path when the current path is still valid.
- Use a new system variable named PipeNetworkSyncMode to control the synchronization of data referenced pipe networks when you open a host drawing.
Collaboration and Data Exchange Updates
- Use the new features to bring ArcGIS data into your Civil 3D drawings and to save back, publish, and export data for use in ArcGIS.
- Export feature lines to LandXML files and use enhanced methods for importing feature lines from LandXML files.
Other Updates
- The behavior of some of the overlay slope options in the corridor rehab subassemblies has been updated.
- Reports are now available on the Toolbox tab of Toolspace for reporting parcel information in a counter-clockwise direction.

A more comprehensive description of the upgrade may be found in the “Release Notes for Autodesk Civil 3D 2020.1" in help.autodesk.online

Autodesk Civil 3D 2020 delivers further improvements to performance and scalability, enhancing BIM design and production efficiencies for larger, more complex projects, the company said. New features and the new Dynamo for Civil 3D will streamline repetitive tasks and help users get more out of models. Users can get started with the included sample scripts or use the visual programming environment to develop custom scripts to tackle specific tasks.

In addition to the introduction of Dynamo for Civil 3D, the 2020 version of Civil 3D also comes with notable enhancements to storm and sanitary analysis, gravity network analysis, and an upgraded user interface.


What's new in Civil 3D 2020
Updated User Interface
The first thing users may notice when launching Civil 3D 2020 is the look and feel – a dark blue theme running across the ribbon background, and easier navigation. These cosmetic updates were designed to create a uniform experience across the entire AEC Collection. Upgrades to the ribbon icons scale with high-resolution monitors such as a 4K display, helping to make the purpose of each command clear and intuitive.

Storm and Sanitary Analysis
There are several updated features in Autodesk Storm and Sanitary Analysis, which accompanies Civil 3D 2020. When analyzing multiple storm events, users can now add separate tailwater conditions for each event and edit the outfall conditions for each storm event. When using dimensionless hydrographs, users can now adjust the peak rate factor for the hydrograph on a per sub-basin basis. For example, if running an SCS hydrology model, TR20 or TR55, the sub-basin dialog box enables a new peak rate factor field at the top of the dialogue box and for each sub-basin in the table at the bottom of the dialogue box. The factor can be entered on either location and copied from one sub-basin to another. New storage chamber systems from ADS or Cultec are available for underground attention.

Gravity Network Analysis
The updated analyze gravity network command helps users analyze a gravity pipe network and then apply the results while in the model. This feature uses the hydraulic properties and gutter details for each structure being analyzed in this network. The wizard for the analyze gravity network command has been replaced with a mode-less dialogue box, which enables users to directly interact inside the drawing. There are three types of analysis to choose from — pipe sizing, computing energy in hydraulic grade lines, and inlet analysis. By selecting the network details button before running the analysis, users can review and resolve issues before performing the final analysis. Additional outfall options have been added to give more design options. View the final results of an analysis in an Excel spreadsheet for reporting.