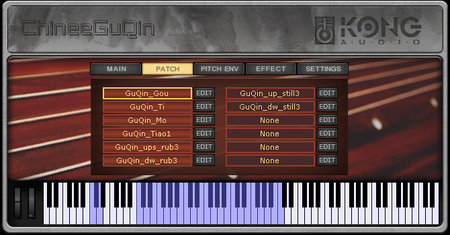 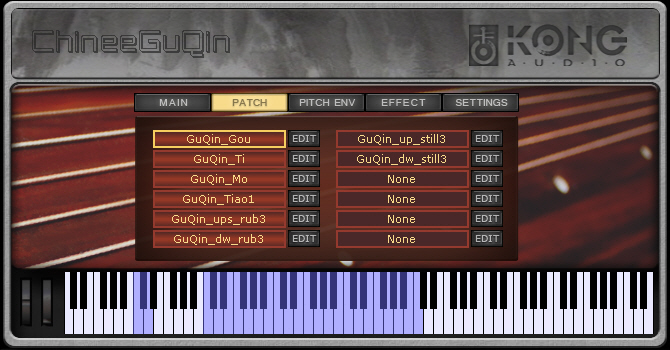 The Vivacious Vessel of Harmony
GuQin is among the few most distinctive and representative classical Chinese instruments ever. The written record of it can be traced back to at least 3,000 years ago. It's a zither similar to GuZheng, but since GuQin does not have bridges, it is far more versatile in terms of tones and playing techniques, it is also much harder to master.

GuQin has a special place in the Chinese history as a symbol of the high-culture of the nobles and intellectuals (Junzi, Superior Man). It's also seen as the vessel for pursuing harmony. Even Confucius played and taught GuQin. During the last two tumultuous centuries of China, however, GuQin's tradition was almost extinct. Nowadays the Chinese have resumed the tradition and are trying to revitalize it.

GuQin is usually accompanied with a lower-pitched flute. ChineeNanxiao, or some other xiao in ChineeWinds are good choices of companion. The style is usually more personal and inward.

In 2003 , GuQin music is recognized as Heritage of Humanity by UNESCO.

About ChineeGuQin
With true knowledge of the Chinese instrument, Kong Audio planned GuQin from the ground up. By intertwining the detailed sampling and the tailored Intelligent Legato mode, GuQin is brought back to life in its authenticity. As can be heard from the audio demo (which is made with ONE SINGLE track of ChineeGuQin, without even using pitch-bending at all), ChineeGuQin captures not only the sound, but also the “silence” (string-sliding), and this “silence” is essential to GuQin music.

Also new is the real-time subset browser which greatly helps the user to see which subset is active in the current patch according to the incoming notes. By default ChineeGuQin is in the legato mode. It can be switched to polyphony mode using the Sustain Pedal, giving the musician an easy switch of the playing style. When in the polyphony mode, the playing style is usually played in two sections.

Note:
* New Kong Audio plugins have problems about Exiting, and it would crash some DAWs. That is not our fault.
* Do not mention us about "Unregistered" caption. It works fully.
* If our installer doesn't work for you, try to install ffdshow