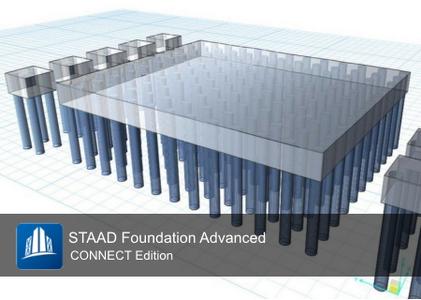 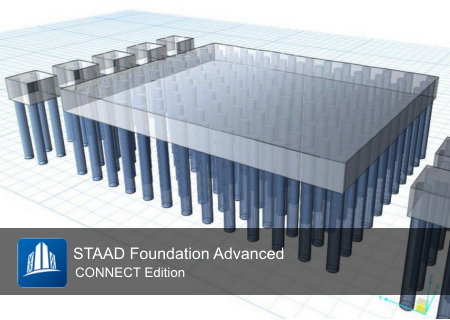 
CONNECT Edition v9.2.0 Release Notes
The following features have been implemented and/or enhanced since the CONNECT Edition V9.1 (Release 9.1.0.14) of STAAD Foundation Advanced.

The 2018 edition of the Australian code with Amendment 1 is now available for design of isolated footings, combined footings and pilecaps in the General mode of the program.

Isolated footings with the column located away from the center

This feature, which was disabled a few versions ago, has now been restored.

The user has to specify the offset distance along the global X and Z axis. In the General as well as Toolkit modes of the program, this is done through the Footing Geometry page. 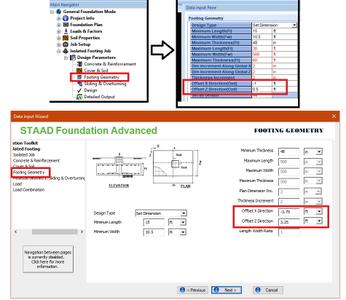 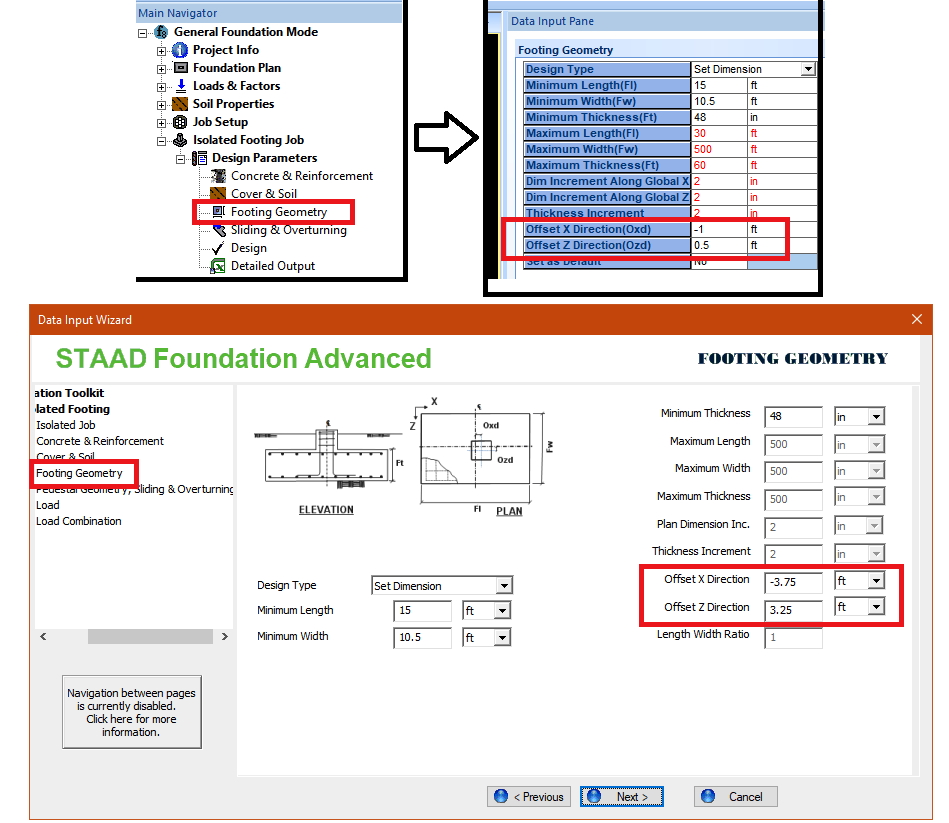 An offset is positive if it is along the positive direction of the respective axis. Similarly, a negative value should be specified if the column is located on the negative side of the corresponding global axis with respect to the center of the footing. The positive directions of the X and Z axis are as shown in the figure below. 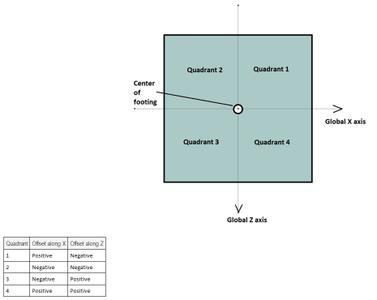 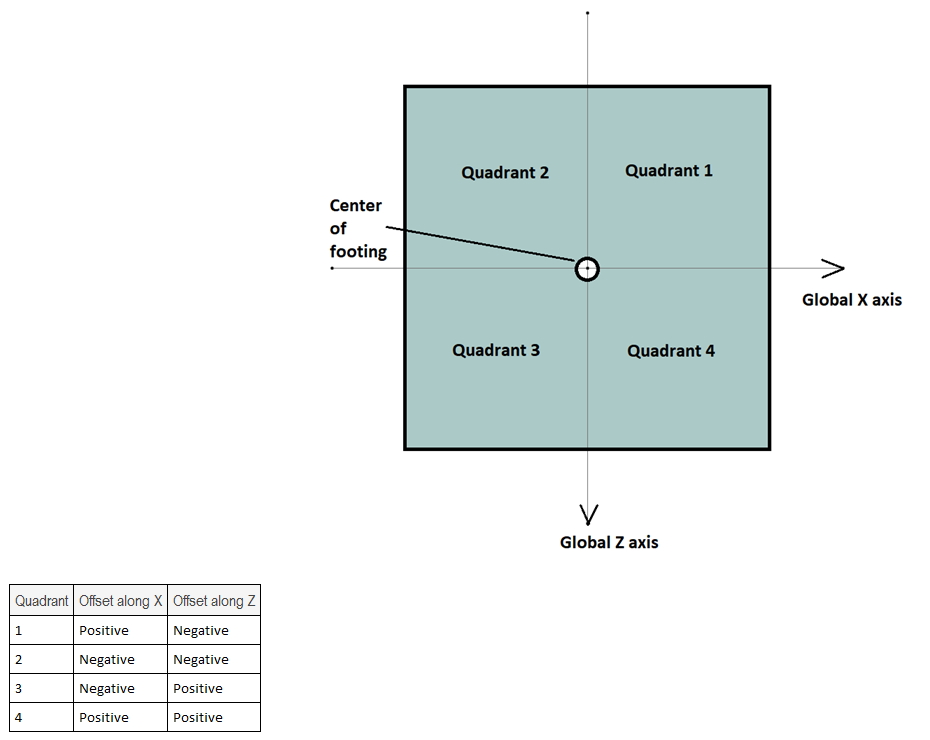 As we know, the program supports two types of design:

For the purposes of calculating the overturning and restoring moments for stability checks, the rules described in the following figure are used. 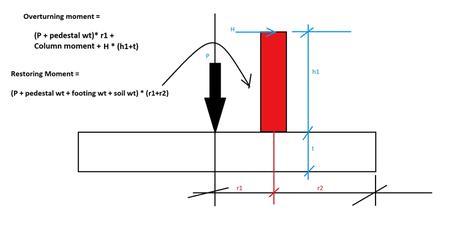 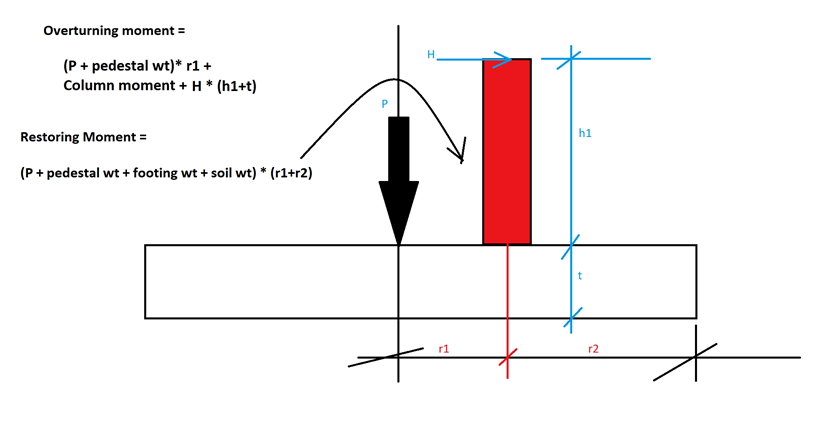 In the above figure, P is the vertical load, H the horizontal force and M the bending moment transmitted into the footing by the column or pedestal.

The program output is along the same lines as that for isolated footings without any eccentrically located column/pedestal. 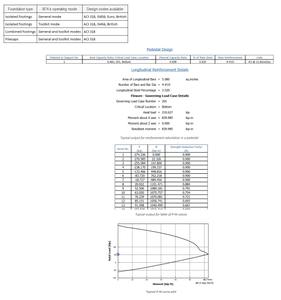 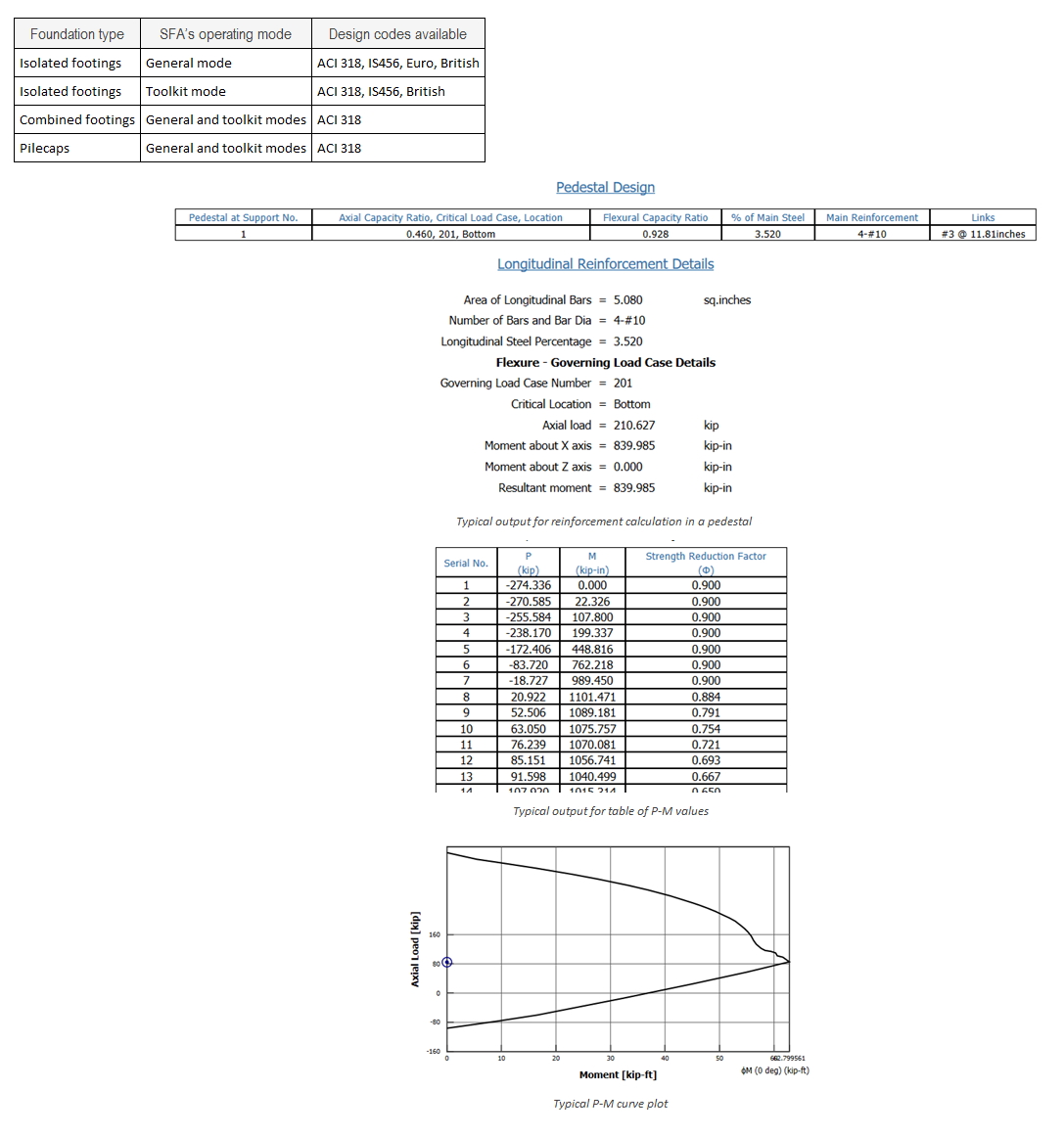 For the pilecap foundation in the general and toolkit modes, the maximum pile reactions for lateral, vertical and uplift for service load combinations are now reported in the calculation sheet. This feature is now available for several design codes (but not all).

In past versions, a single calculation report was created that included the results of successful design of footings or pilecaps for every support that was included in the job. If the amount of data such as the number of load cases or number of supports was large, it often led to significant time taken in displaying the report and in printing it or saving it as a PDF because this report ran into dozens or even hundreds of megabytes of data.

In this version, the reporting system has been changed so that they are created and displayed only for one support at a time. Thus, a giant single document holding the results of all the foundations designed in a job has been replaced with multiple calculation sheets.

Once the analysis/design for the current job is completed, the program will shift the focus automatically to the View menu, and, the Calculation Sheet for the first support in the job will be displayed. One can change the support number from the drop-down list in the menu bar, and, the corresponding Calculation Sheet will get loaded.

For printing it or saving it as a PDF, the Print Calculation Sheet button has also been moved to the top of the sheet so that the extra step of scrolling to the bottom of the page can be avoided. 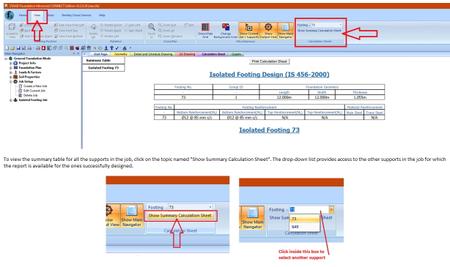 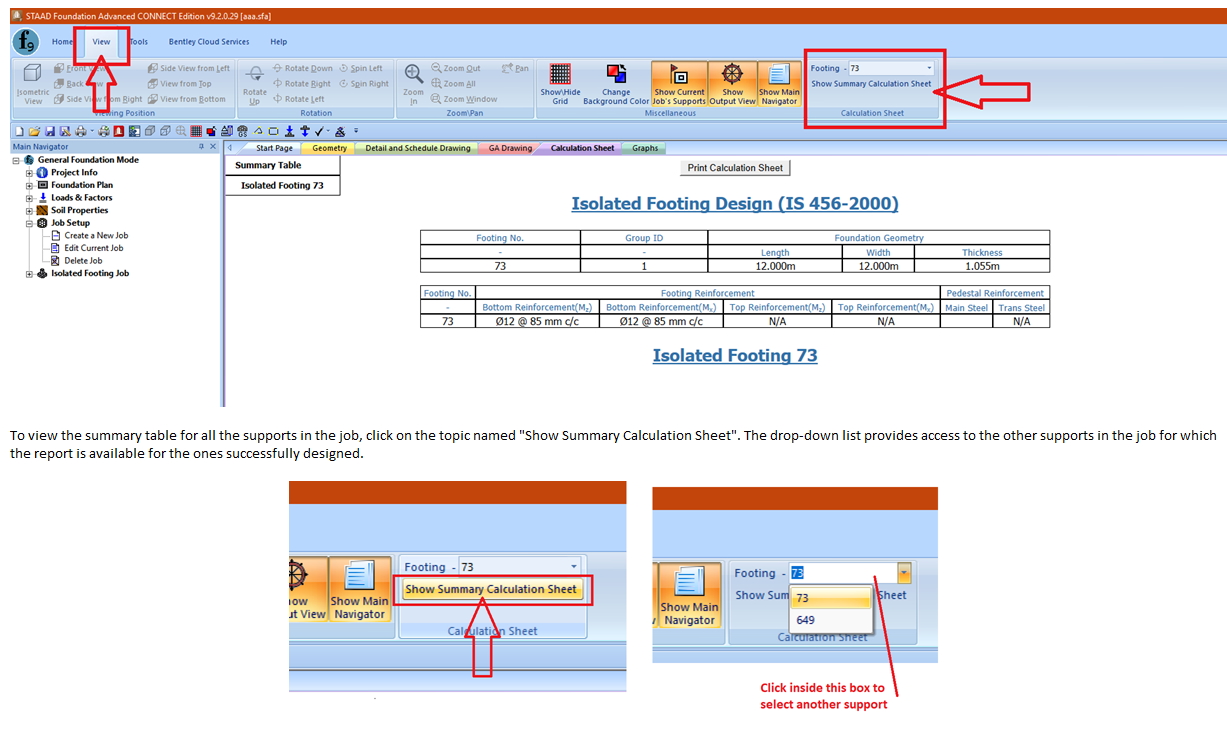 For mat foundations, the analysis of the mat may not be successful due to reasons such as - a low vertical load combined with a high overturning moment may result in all the soil springs losing contact with the soil. Such cases are usually characterized by instability warnings in the output file for the STAAD.Pro FE model of the mat, large displacements, and a failure to meet static equilibrium for those load cases.

For those load cases, as shown in the next figure, a report titled "Static Equilibrium Mismatch Report" showing the total applied loads and total reactions is now provided in the calculation sheet. It also contains a row titled "Difference" in which non-zero values indicate the degrees of freedom for which the equilibrium is not satisfied.

Additionally, a warning will be shown in the output pane listing those load cases. 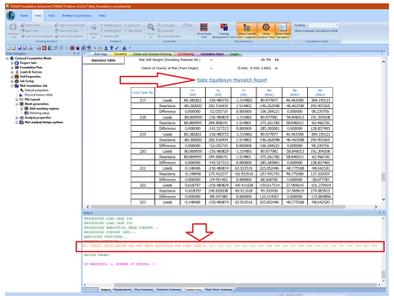 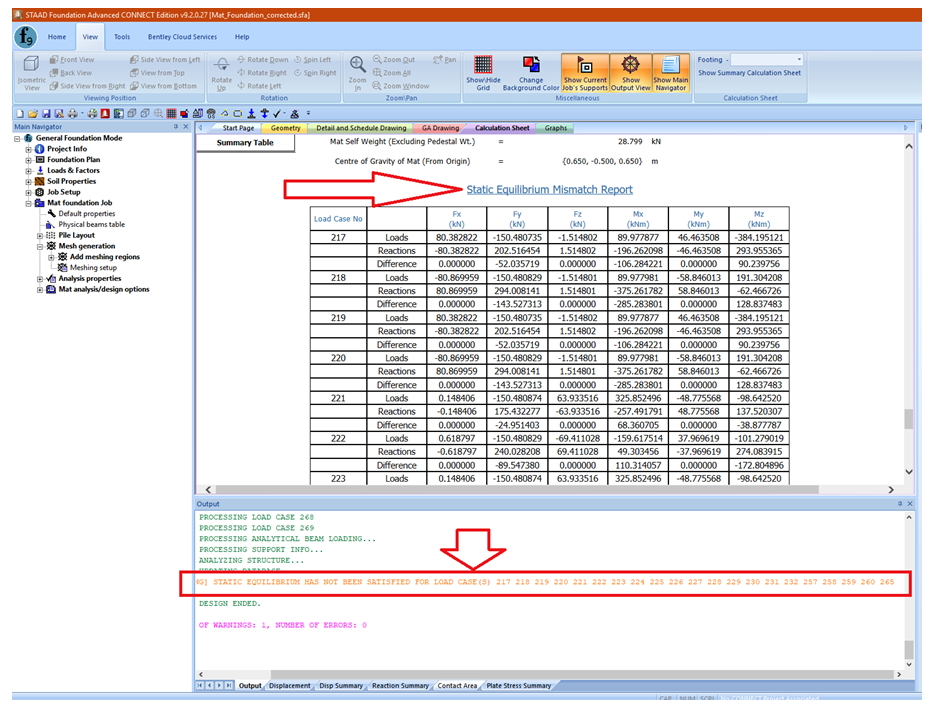 In past versions, for the purpose of computing the soil pressures for service load cases, and for the stability checks (overturning and sliding), the surcharge load on footings was treated as a dead load. Thus, in the various load combinations, it was multiplied by the same load factor with which the dead load and selfweight of the footing was multiplied by.

Based on requests from various users, a greater amount of flexibility has been introduced in this version in how surcharge load should be treated. Thus, if the user wants SFA to use one load factor for concrete deadweight and soil weight, and another load factor for surcharge, on a load case by load case basis, he/she can now do that in the manner described here.

General Mode - Isolated, Combined footings and pilecaps for the ACI code : In the Apply Selfweight and Dead weight factor table, a separate column is now available for Surcharge in which users can specify the load factor that should be used for that load item in the individual load combinations. 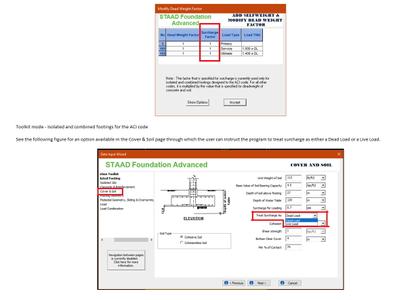 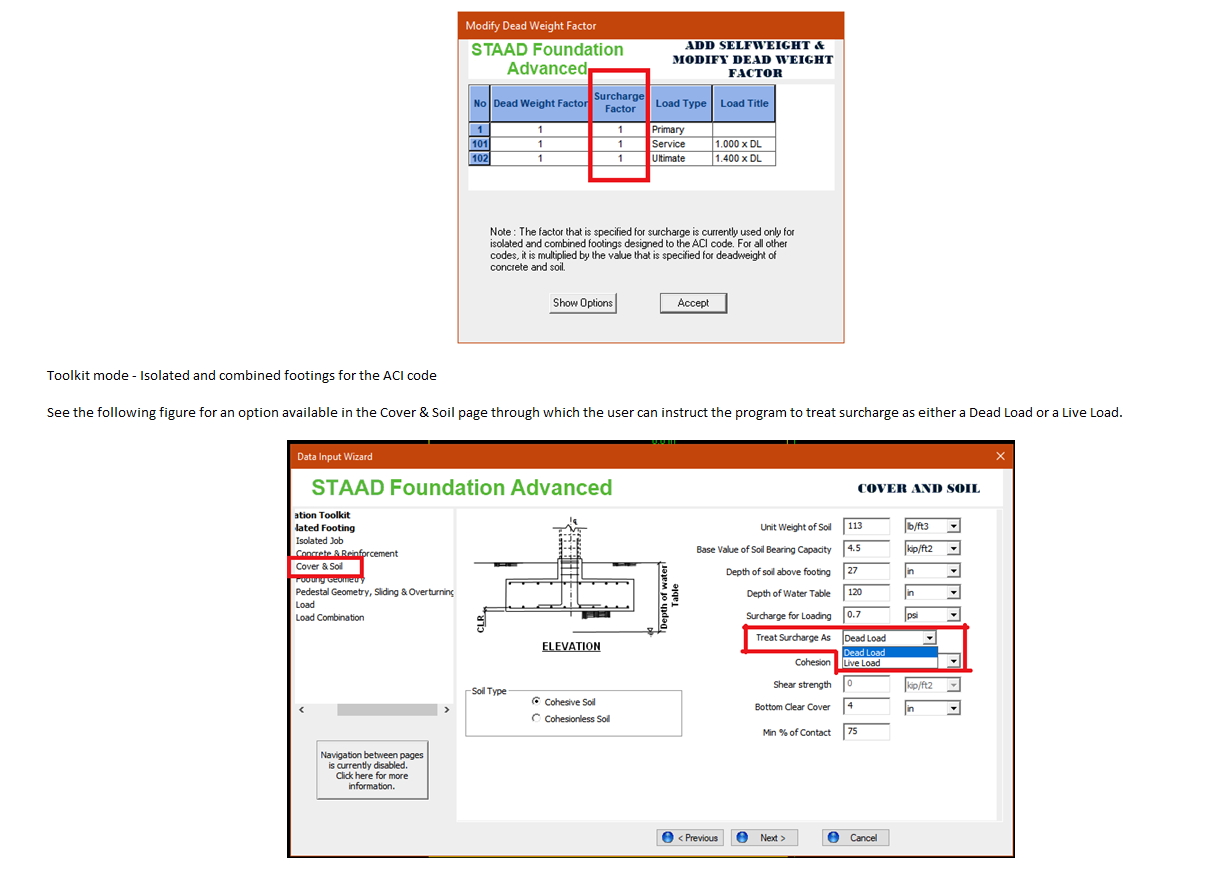 For example, if one of service load combination that is being solved for finding the soil pressures happens to be

then, if the user chooses to treat surcharge pressures as a 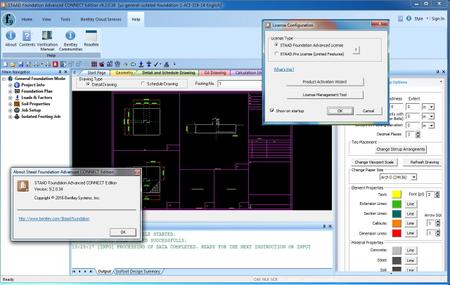 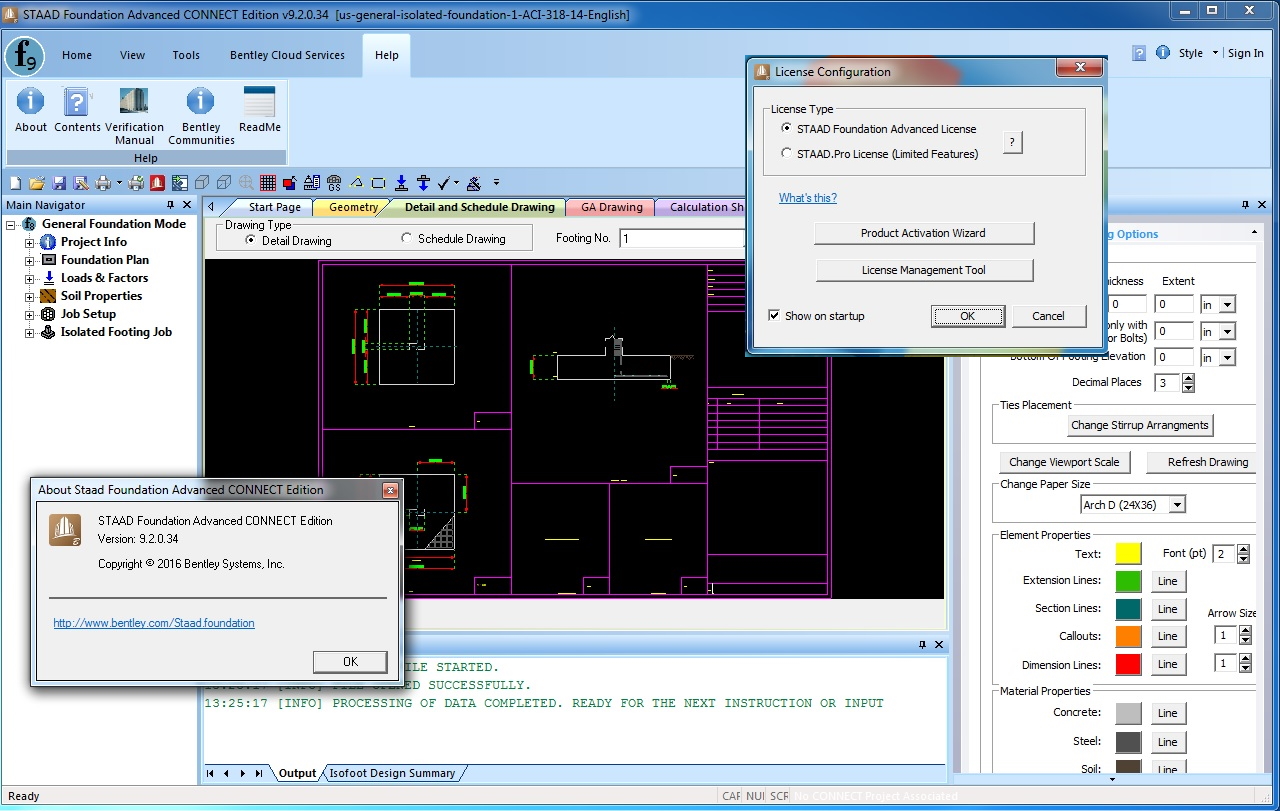 STAAD Foundation Advanced a software package for the analysis and design of a variety of foundations. These include general foundation types such as isolated, combined footings, pile caps, slab on grade or on piles (mat foundations), octagonal, strap, and, plant foundations such as vertical vessel and heat exchanger foundations.

A part of the STAAD family of products, STAAD Foundation Advanced can import and update the geometry, loads, and reactions from a STAAD.Pro model after which it will design the foundation type that we want at those supports. If the type happens to be a pilecap, it can determine a number of pile arrangements and design the pilecap for the arrangment that we choose. Data can also be brought from spreadsheets (e.g., such as that in Microsoft Office Excel) into STAAD Foundation Advanced.

The output from the program includes customizable reports of the calculations performed, general arrangement drawings, and schedule drawings. The reports are a useful tool for line by line checks to determine the correctness of the calculations if the engineer wishes to do so. The program's graphical interface enables users to view the displaced shapes, shear and moment diagrams, stress distribution, and, reinforcement layout.

For mat foundation designs, STAAD Foundation Advanced creates a finite element model of the mat slab on grade. Soil is treated as spring supports whose stiffness is determined based on the size of the elements of the FE mesh. The model is then analyzed using STAAD.Pro, and, design of the slab is performed by aggregating the results across elements that are clustered into design strips.


Bentley Systems, Incorporated. is the global leader dedicated to providing architects, engineers, constructors, and owner-operators with comprehensive architecture and engineering software solutions for sustaining infrastructure. Founded in 1984, Bentley has nearly 3,000 colleagues in more than 45 countries, $500 million in annual revenues, and, since 2001, has invested more than $1 billion in research, development, and acquisitions.

Note: Windows XP, Windows NT, Windows 2000, and Microsoft® Vista, Windows 7, and 32-bit versions of Windows are no longer supported.
- Sufficient free space on the hard disk to hold the program and data files. The disk space requirement will vary depending on the modules you are installing. A typical minimum is 500MB free space.
- A multimedia ready system with sound card and speakers is needed to run the tutorial movies and slide shows.