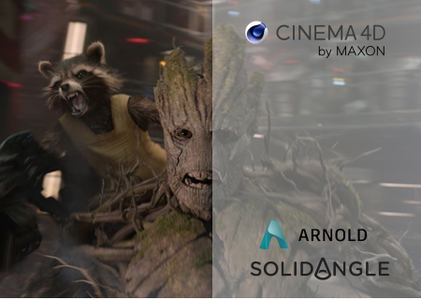 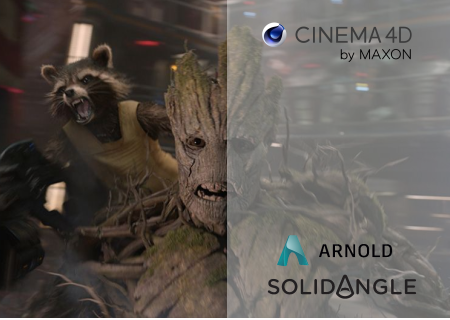 Arnold is an advanced cross-platform rendering library, or API, developed by Solid Angle and used by a number of prominent organizations in film, television and animation, including Sony Pictures Imageworks. It was developed as a photo-realistic, physically-based ray tracing alternative to traditional scanline based rendering software for CG animation.

The Arnold architecture was designed to easily adapt to existing pipelines. It is built on top of a pluggable node system; users can extend and customize the system by writing new shaders, cameras, filters and output driver nodes, as well as procedural geometry, custom ray types and user-defined geometric data. The primary goal of the Arnold architecture is to provide a complete solution as a primary renderer for animation and visual effects.


Arnold for Cinema4D (C4DtoA) supports most Cinema 4D features such as instances, cloners, deformers, generators, MoGraph geometry, hair, and ThinkingParticles. It also supports both animation and single frame distributed rendering in Team Render, allowing the use of all computers in a local network to speed-up Arnold rendering. Third-party plugins TurbulenceFD and X-Particles are natively supported, allowing artists to render high quality smoke, fire, and particle effects with fully interactive feedback. Other features include volume rendering with OpenVDB, a node-based material editor and a comprehensive list of shaders and utilities, including vertex maps and per-face materials.

HOW TO Realistic Shaders in Cinema 4d and Arnold | Plastic, Wood, Concrete and Metal | Tutorial

- Windows 10 or later, with the Visual Studio 2019 redistributable.
- macOS 10.13 or later
- Apple Mac models with M series chip are supported under Rosetta 2 mode
- CPUs need to support the SSE4.1 instruction set.
- GPU rendering works on Windows and Linux only and requires an NVIDIA GPU of the Ampere, Turing, Volta, Pascal, or Maxwell architecture. We recommend using the 460.39 or higher drivers on Linux and 461.40 (Quadro), 461.40 (GeForce), or higher on Windows. See Getting Started with Arnold GPU for more information.
- Optix denoiser requires an NVidia GPU with CUDA Compute Capability 5.0 and above.