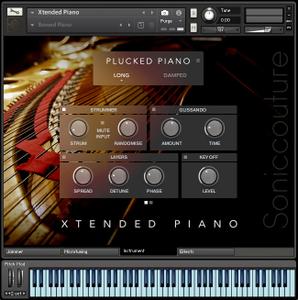 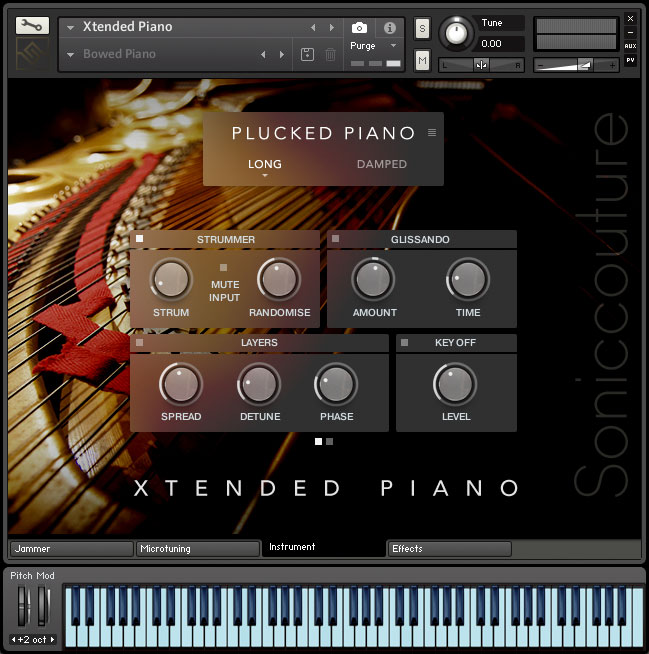 Soniccouture Extended Piano v1.1.0 KONTAKT | 3.32 Gb
An "Extended technique" is a term to describe playing a musical instrument in an unconventional way, to coax new timbres from a traditional instrument. Since the early 20th century, the piano has been at the forefront of this trend, with many composers from John Cage onwards finding innovative, unorthodox ways of generating sound.

1. BOWED PIANO
Curtis Curtis-Smith and Stephen Scott have both developed piano works in which the performers bow the strings of the piano using specially designed bows. Our bowed piano includes three articulations, two made with very long bows which are sustained (and the samples are looped), and also a short bow made from a tongue depressor and horsehair, which produces a short staccato sound.

2. MUTE PIANO
Notably originated by George Crumb, Mute piano is a technique in which you lightly touch the finger at a nodal point on the piano string and play the key to produce a harmonic; Crumb generally used the 3rd harmonic, so it sounds a 12th above the fundamental (an octave plus a fifth). It is one of the few easily produced harmonics which the performer can actually reach while still being able to play the keys, and so this is what we used for the Xtended Piano instrument.

3. PLUCKED PIANO
Henry Cowell first presented a technique (among others) in which the piano notes are plucked, either with the fingers or a plectrum of some sort. We used a guitar pick and recorded plucked notes with both the piano dampers down and up.

4. MALLET PIANO
A piano has mallets itself (made of hard felt), but you can also hit the strings with foreign mallets to produce a different timbre. For this collection we recorded hitting the strings with a wooden mallet, and with a marimba mallet. The wooden mallet has a timbre reminiscent reminiscent of honky-tonk or "thumb tack" pianos, like those used in ragtime during the 20's (or Nancarrow's player piano).

5. SFX PIANO
The classic freestyle technique of simply reaching inside and scraping the strings, knocking the frame, strumming across the strings - all producing a huge soundscape drenched in piano resonance.