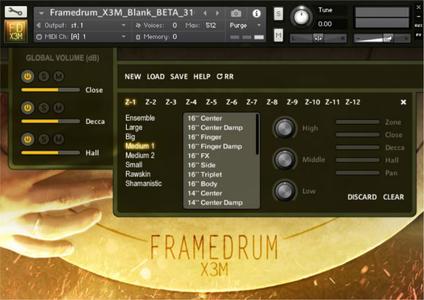 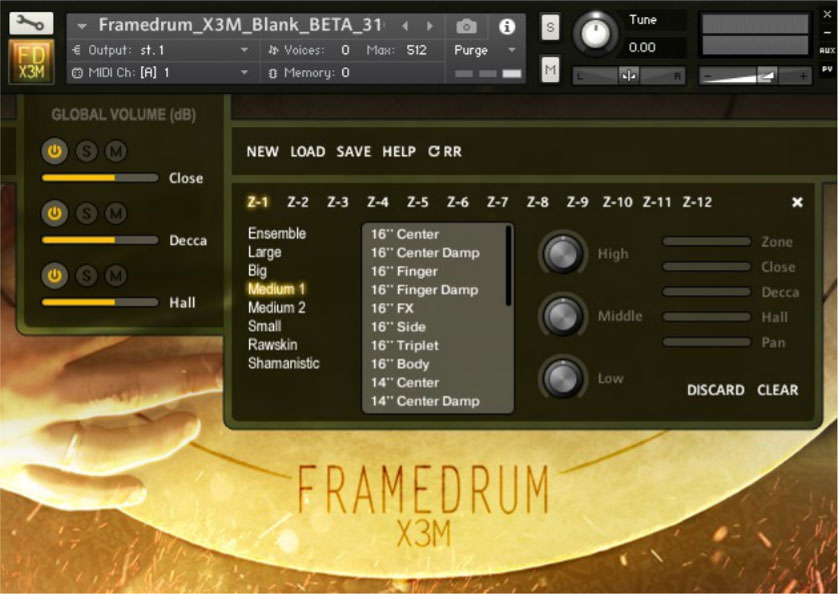 Strezov Sampling Framedrum X3M KONTAKT | 2.31 Gb
Authentic Middle Eastern frame Drums recorded in various sections and ensembles, suitable for all kinds of dynamic music and especially film/videogames. For years the Middle Eastern frame drum has been a constant colour in soundtracks and music productions all over the world. Applying our sampling philosophy to the various instruments of the frame drum branch yielded some very organic and fresh sounding results, which combined with our X3M percussion engine are simply a joy to play.

One of our main goals was to have consistent Round Robins captured for as many playing techniques as possible to allow writing fast, but at the same time smooth and realistic sounding percussion arrangements. To achieve that we carefully edited every single sample of our 10 Round Robins manually and did as many iterations as needed after extensively testing the articulations in a real life composing environment.

In addition to that yet another important goal for us was to expand the sonic palette of the traditional frame drum sound by adding other instruments, which enhance, but don't alter the aesthetics of the basic sound too much. Therefore frame DRUM X3M doesn't just consist of the same stuff we have all heard countless times before, but features new and yet unheard instrument combinations breathing live into your percussion arrangements.The recordings took place in the Sofia Session Studio where we also recorded the previous X3M libraries to allow smooth and easy layering.

The X3M Percussion Engine
The concept behind this engine is fairly simple – the keyboard range is divided into 12 zones that you are able to assign different sounds to. After creating a template of your choosing just plug in and play – nothing else needed!
In addition to that the engine also allows you to tweak individual zones, as well as the whole mapped ensemble patch with various effects and mic positions. Combining these with the natural and organic recordings you have maximum flexibility when it comes to sound. Once you load up the X3M Ensemble Builder you automatically load all samples inside the “Samples” directory. However, the instrument is built in such a way that it actually keeps all samples purged, unless you load them up into a zone. This means that not only do you have a single patch with all types of percussion you might need, but it is also optimized and doesn't hurt your RAM ressources in any way!