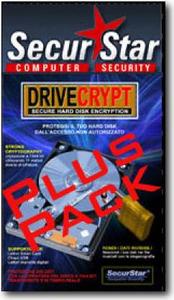 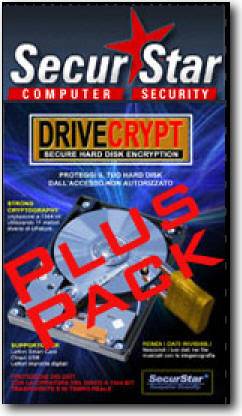 SecurStar DriveCrypt PlusPack ver.3.80G Encrypts the whole operating system
6.2 Mb | Windows OS
SecurStar DriveCrypt Plus Pack 3.80G (DCPP) provides true real-time "on the fly" 256-bit disk encryption. Providing advanced HDD FDE (Full Disk Encryption) as apposed to VDE - (Virtual disk encryption) or "container" encryption, DCPP is an important evolutionary step in the field of transpa-rent data protection.
DCPP - allows you to secure your HDD disk(s) (including removable media) with a powerful and proven encryption algorithm (AES-256) at the sector level, ensuring that only authorized users may access it. The encryption algorithm used by DCPP is a trusted, validated algorithm chosen by the National Institute of Standards and Techno-logy (NIST) and slated to be the cryptographic standard for years to come. AES-256 is a FIPS-approved symmetric encryption algorithm that may be used by U.S. Government organizations (and others) to protect sensitive information. DCPP is automatic and completely transparent to the user. Not only does this decrease user involvement and training requirements, but it creates the foundation for enforceable security. The careful integration of boot protection and automatic encryption provides a high degree of security with minimal impact on users. Boot protection prevents subversion of the operating system (via floppy bootup, for example) or the introduction of rogue programs while sector by sector encryption makes it impossible to copy individual files for brute force attacks. DCPP - safeguards the operating system and the important system files (which often contain clues to passwords for Windows). DCPP is the fastest and most feature-rich real-time encryption system available, Special care has been taken to render all cryptographic parts as invisible & transparent as possible.

Pre-Boot Authentication: The user is authenticated by means of pre-boot authentication (PBA) before the system is started and therefore before the operating system is booted. This kind of authentication cannot be manipulated, PBA therefore guarantees maximum security. Neither keys nor passwords are stored on the PC’s hard disk. All of the information required to boot the operating system is derived from the password. This makes the use of hard disk tools for analyzing the hard disk completely ineffective. PBA in provided by a system call BootAuth and is fully graphical, allowing organizations to customize the login screen.

Full Disk Encryption: Automatic & transparent FDE offers several key advantages relative to file encryption. FDE secures the system and temp files that often contain sensitive data but are missed by file encryption. Even removing the drive itself does not give access to any file or directory structure. FDE is performed sector by sector without creating temp or backup files: As a result, large files will decrypt without delay whereas file encryption is normally much slower. FDE also avoids such time consuming tasks as secure deletes of temp files or work files in clear text, and obviates the need to do a full delete on disks to be discarded.
How does it work? As data is read from the hard disk, DCPP automatically decrypts the data before it is loaded into memory. When data is written back to the hard disk, it is automatically re-encrypted. This process is completely transparent to the user or any application programs, the data is caught "on the fly" as it transfers back and forth between the hard disk and memory. Consequently, users don't need to remember to decrypt or re-encrypt their data, or change the normal operation of their PC. In addition, only individual sectors are decrypted at any one time, not the whole hard disk. Other products that claim to be "on the fly" decrypt an entire file and load it into memory, creating significant security risks. DCPP is smarter and more secure because it decrypts only the specific sectors of a file that are in use. Unprotected data never resides on a DCPP encrypted disk.