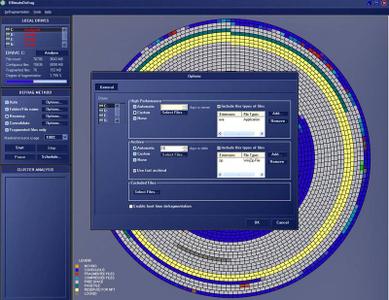 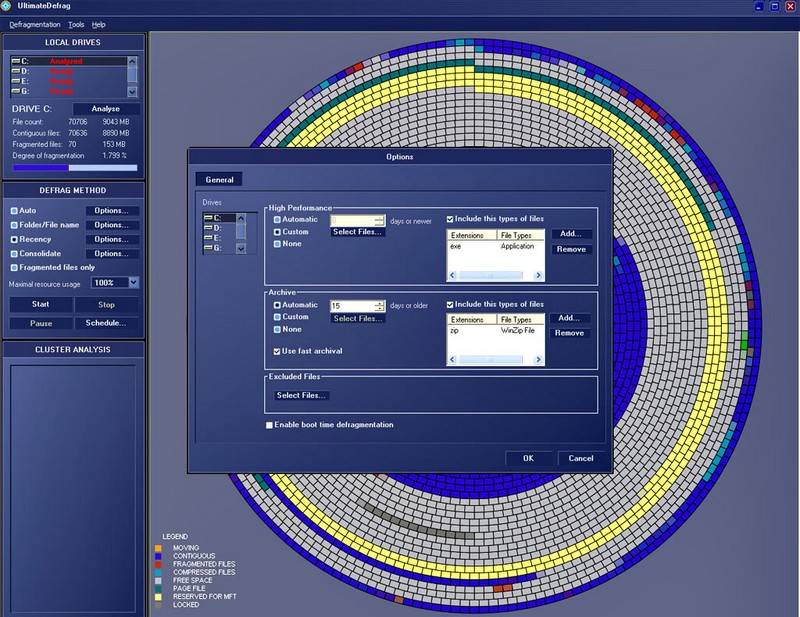 UltimateDefrag is the world's most powerful defragger in terms of the file placement flexibility it gives you for defragging and strategically placing files on your hard drive - right down to the individual file level. With The Defragger And File Placement Optimizer That Lets You Defrag & Optimize Your Hard Drive - Any Way You Want To!

If you run complex games, simulations and applications, UltimateDefrag gives you the capability to place the files associated with these applications in the position on your hard drive that will give you the best performance possible.
Now watch your programs launch faster! Your games perform like they never have! Experience a Windows Desktop and Operating System with the same sprightly performance as when your PC was brand new!


UltimateDefrag Features:
• Achieve Optimum Performance Hard Drive File Access That Gives You A Much More Responsive PC
• Strategic File Placement Gives You Complete Control Over Which Files And Programs You Want Increased Performance From
• Place Unused Data (such as ZIP Files and unused Windows files) Out Of The Way
• Place Directories In The Optimum Position For Superior Performance
• Defrag with as little as 1% FREE space
• Enjoy fast 3 to 5 minute complete defrags
• Choose From 4 Powerful Defrag Methods With Over 33 Defrag Option Combinations
• Make Full Drives Perform Almost Like They've Been Newly Formatted
• You No Longer Need To Consider Partitioning - UltimateDefrag Is Like Partitioning-On-The-Fly!
• The First Complete "DISK" Metaphor In Any Defragger
• Say Goodbye To "Hard Drive Fatigue" Forever!
• Based Upon True Scientific And Natural Laws
• More Than Just A Defragger - It's Also a File Placement Optimizer
• Defragging Defrags Your Files - UltimateDefrag Defrags Your File System
• Nothing "Black Box" about this - you have total control over which files go where
• Flexible Scheduling lets you defrag while you're away from your computer
• All This In An Incredibly Powerful Program That's Less Than 1 Mb In Size!

NEW FEATURES
1. Option To Respect the Windows Layout.ini File for Optimal File Layout. The Layout.ini file is a file generated by the Windows prefetcher. Each time you launch a program or reboot your system, Windows prefetcher studies the file access patterns of each program launch or the boot sequence. It stores these files in the Prefetch folder with a .PF extension. Every 3 days, Windows will analyze each .pf file in the prefetch folder and will generate a file that lists the optimum file and folder layout on the disk. This file is called Layout.ini. Windows itself performs a boot optimization process every 3 days where it looks for a contiguous free space that it can use to place files required for optimum system bootup performance. This is however only a partial attempt and is not necessarily placed on the outermost tracks. When selected, UltimateDefrag will layout files in the entire layout.ini file in exact order as specified by the Optimal File Layout. These files are placed at the very outer tracks. The result of this is a very significant performance increase at bootup and during launching of most programs.
2. Added Ability to Sort The Order Of File Extension Types. When you wish to select files of a particular extension for High Performance (or archive), you can sort the order of these files by clicking and dragging. e.g. if you select all files with .EXE and .DLL extension for the high performance section, you can reorder the order that files are placed. If EXE is at the top of the list and DLL second, the program will (after archive has been taken care of first) lay out all files with .EXE extension first and then files with .DLL extension.
3. Added Ability To Process High Performance And Then Stop the Defrag. In the event that you may only wish to defrag, process and optimize the files you have selected for High Performance e.g. the Layout.ini file or files from a specific folder you may have selected for High Performance, you can have UltimateDefrag perform that only and then stop the defrag. This has been added as an extra option under each defrag method.
4. Added additional Statistics Tab under Volume Information. These additional statistics are updated dynamically and provide such information as number of fragments and average fragments per file.
5. Added screensaver mode. When this option is selected, defrag does not run until screensaver becomes active.
6. Added ability to change legend colors through a menu option