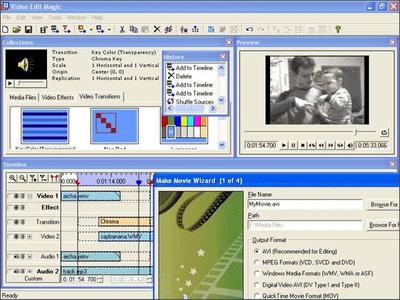 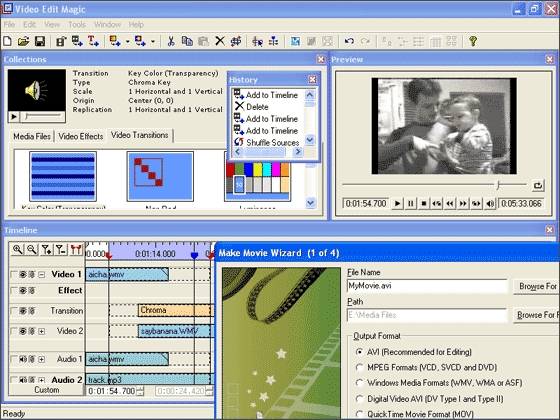 Video Edit Magic ver. 4.18 | 12 Mb
Video Edit Magic makes it easy to join, split, crop, trim, modify color, and merge your video files. It includes more than 150 built-in transitions, making it ideal for hobbyists and professionals to turn ordinary videos into works of art. A unique benefit of Video Edit Magic is the volume track which is displayed as a volume graph allowing you to change the volume of audio clips at any point from 0% to 400%. You can create fade-ins, fade-outs, Doppler effects, and almost any volume effect that may have required predefined effects.

What's New in Video Edit Magic 4.1:
- Make Movie in Windows Media 9: The all new Windows Media 9 support gives you Windows Media 9 profiles organized in 4 different categories of videos. You can now make movies using the Windows Media 9 video and audio codecs.
- Pan and Zoom Effect: The new Pan and Zoom video effect lets you create the classic Ken Burns effect from your photo snaps and videos. Breathe life into your still photos by adding this effect and some music.
- Animated Transform Effect: With this new effect, you can make your videos move and rotate at the same time. For example, you can also start from an off-screen position and make Video Rolls.
- Display Aspect Ratio in DVD Video: With Video Edit Magic, you can now create DVD Video for Normal TV, HDTV and Cinemascope Movie.
- Support for USB 2.0 Camcorders: The enhanced capture tool now lets you capture from Camcorders that are capable of transferring videos using a USB 2.0 connection to your PC.
- Capture from DV Cameras to Windows Media: Like WebCams, the capture tool now enables you to capture from DV Cameras directly to Windows Media Video (WMV). This will produce small captured files.
- Capture Entire Tape: With this new option in the Capture tool, you can setup Video Edit Magic to capture the entire video from your DV Camera's tape while you relax.
- Hidden Track Color: When you hide tracks, Video Edit Magic now changes the color of the entire track to indicate hidden tracks.
- Batch Conversion: The media converter tool now supports batch conversion. Add all files that you want to convert at once and have the converter tool convert them one after another.
- Enhanced Key Color Transition: Along with the specified key color, the new Similarity option will enable you to render colors near to the key color as transparent.