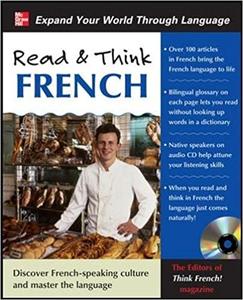 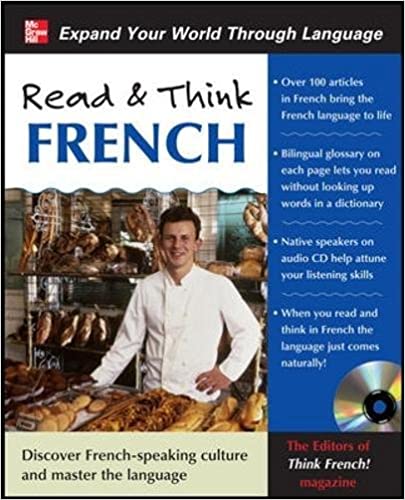 The Editors of Think French! magazine, "Read & Think French"
English | ISBN: 0071702334 | 2010 | 256 pages | EPUB, PDF | 9 MB + 8 MB
Immerse yourself in the French language and culture
Read & Think French is your ticket to building key French language skills. This book features 100-plus engaging, easy-to-read articles written by native French-speakers. Each article features a bilingual glossary on the same page that allows you to learn without stopping to look up new or unfamiliar words in a dictionary. As the you move through the book, you will gain confidence with the French language and build a vocabulary of key French words and phrases. Each chapter features several written exercises that reinforce new vocabulary and comprehension.
The 70-minute companion audio CD features several of the articles read aloud by native-French speakers from various backgrounds giving you valuable practice in French listening skills.
Read & Think French brings the culture of French-speaking countries to life! You will enjoy a travel narrative from Provence and a documentary on West Indies folk music as well as explore the geography of the French Alps and the streets of Montreal. Filled with engaging features such as a recipe for beigne de nos grand-mères canadiennes (traditional Canadian doughnuts), a primer on French business etiquette, a biography of French actor Mathieu Amalric, and a look at the tradition of lavender oil, perfumes, and soaps, this book gives you an insider look at French life and culture–while introducing you to 100s of new French words and phrases.
Topics include:
Culture; Voyages; Tradition; Célébration; Biographies; Musique et Art; Histoire; Géographie; Gastronomie; Coutumes