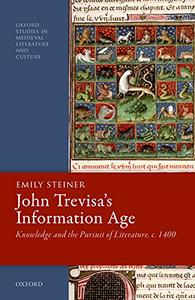 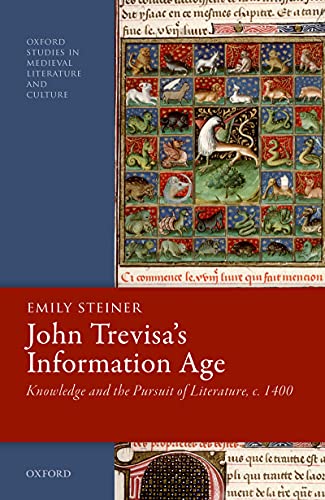 John Trevisa's Information Age: Knowledge and the Pursuit of Literature, c. 1400 (Oxford Studies in Medieval Literature and Culture) by Emily Steiner
2021 | ISBN: 0192896903 | English | 304 pages | EPUB, PDF (True) | 8 + 4 MB
What would medieval English literature look like if we viewed it through the lens of the compendium? In that case, John Trevisa might come into focus as the major author of the fourteenth century. Trevisa (d. 1402) made a career of translating big informational texts from Latin into English prose. These included Ranulph Higden's Polychronicon, an enormous universal history, Bartholomaeus Anglicus's well-known natural encyclopedia De proprietatibus rerum, and Giles of Rome's advice-for-princes manual, De regimine principum. These were shrewd choices, accessible and on trend: De proprietatibus rerum and De regimine principum had already been translated into French and copied in deluxe manuscripts for the French and English nobility, and the Polychronicon had been circulating England for several decades.

This book argues that John Trevisa's translations of compendious informational texts disclose an alternative literary history by way of information culture. Bold and lively experiments, these translations were a gamble that the future of literature in England was informational prose. This book argues that Trevisa's oeuvre reveals an alternative literary history more culturally expansive and more generically diverse than that which we typically construct for his contemporaries, Geoffrey Chaucer and William Langland. Thirteenth- and early fourteenth-century European writers compiled massive reference books which would shape knowledge well into the Renaissance. This study maintains that they had a major impact on English poetry and prose. In fact, what we now recognize to be literary properties emerged in part from translations of medieval compendia with their inventive ways of handling vast quantities of information.