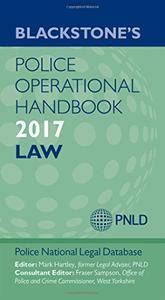 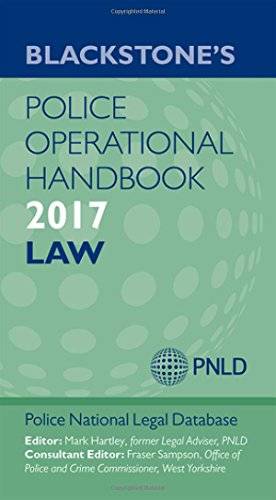 Blackstone's Police Operational Handbook 2017 by (Pnld), Police National Legal Database and Mark Hartley
English | 2016 | ISBN: 0198788622 | 883 pages | PDF | 5,3 MB
Blackstone's Police Operational Handbook 2017 is designed specifically to meet the reference needs of officers whilst out on patrol. Written in a concise and accessible style, it covers a wide range of common offences and clearly explains and interprets the relevant legislation. Using clear and consistent presentation throughout, each chapter offers you a definition of the offence, the points to prove, and a clear system of icons covering police powers and mode of trial. At a glance, you can access everything you need to make a quick, informed decision in a host of everyday policing situations. The eleventh edition of this highly regarded and successful Handbook is fully updated to include all recent legislative developments, including: the Modern Slavery Act 2015, the Criminal Justice and Courts Act 2015, the Serious Crime Act 2015, the Deregulation Act 2015, the Anti-social Behaviour, Crime and Policing Act 2014, and the Children and Families Act 2014, as well with guidance from the new Victims of Crime Code of Practice 2015. The book also changes to the PACE Codes of Practice, including Code A (2015) and Code E (2016), and new HO/MOJ Circulars guidance. Whatever your role - police patrol officer, supervisor, student police officer, PCSO or Special Constable - this is an invaluable tool for operational personnel.