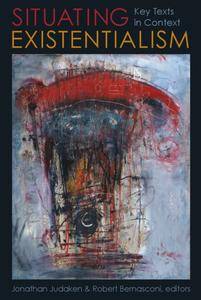 Situating Existentialism: Key Texts in Context by Jonathan Judaken and Robert Bernasconi
English | 2012 | ISBN: 0231147740, 0231147759 | 440 pages | PDF | 3 MB
This anthology provides a history of the systemization and canonization of existentialism, a quintessentially antisystemic mode of thought. Situating existentialism within the history of ideas, it features new readings on the most influential works in the existential canon, exploring their formative contexts and the cultural dialogues of which they were a part.

Emphasizing the multidisciplinary and global nature of existential arguments, the chosen texts relate to philosophy, religion, literature, theater, and culture and reflect European, Russian, Latin American, African, and American strains of thought. Readings are grouped into three thematic categories: national contexts, existentialism and religion, and transcultural migrations that explore the reception of existentialism. The volume explains how literary giants such as Dostoevsky and Tolstoy were incorporated into the existentialist fold and how inclusion into the canon recast the work of Kierkegaard and Nietzsche, and it describes the roles played by Jaspers and Heidegger in Germany and the Paris School of existentialism in France. Essays address not only frequently assigned works but also underappreciated discoveries, underscoring their vital relevance to contemporary critical debate. Designed to speak to a new generation's concerns, the collection deploys a diverse range of voices to interrogate the fundamental questions of the human condition.