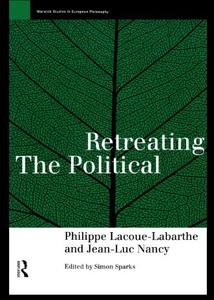 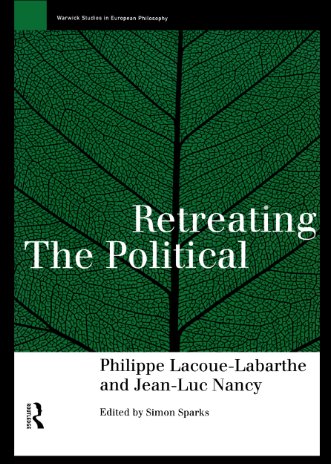 Retreating the Political (Warwick Studies in European Philosophy) by Jean-Luc Nancy, Phillippe Lacoue-Labarthe, edited by Simon Sparks
English | June 13, 1997 | ISBN: 0415151627, 0415151635 | EPUB | 224 pages | 2 MB
This collection of essays presents, for the first time in English, some of the key essays on the political by Philippe Lacoue-Labarthe and Jean-Luc Nancy. Including several unpublished essays, Retreating the Political offers some highly original perspectives on the relationship between philosophy and the political.

Through contemporary readings of the political in Freud, Heidegger and Marx, the authors ask if we can talk of an a priori link between the philosophical and the political; they investigate the significance of the 'figure' - the human being as political subject - in the history of metaphysics; and they inquire how we can 're-treat' the political today in the face of those who argue that philosophy is at an 'end'.